The evolution of Protein Journal

Tuesday night saw the launch of the latest Protein Journal, a magazine / report hybrid that mixes editorial features with trend-based insight, which this issue revolves around the theme of work. Made by Protein, a cheerfully nebulous organisation that functions as a media agency, advertising network, events organiser and more, it’s the physical manifestation of many interests and functions.

I couldn’t make it to the launch itself, but I caught up with editor Max Reyner on Wednesday morning to find out more about the motivation behind this ambitious title. 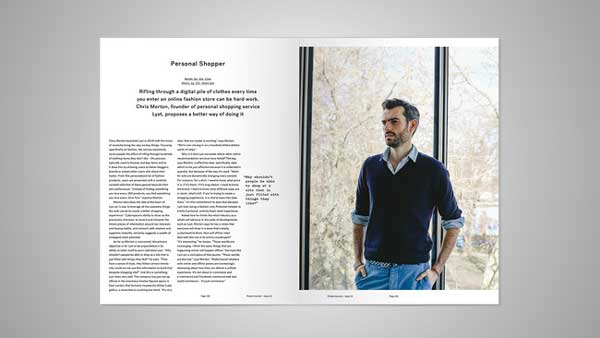 So, how was the launch?
It was good – we started with a forum to discuss the increasing need for vocational study, which is one of the key points in the report. It was really interesting and a nice continuation of the sort of things we talked about in the actual article.

I didn’t realise it was going to have a serious element – I thought it would be a regular booze up!
Yeah – it was serious at the start and then we had the party afterwards, and I really like that. I think it helps to bring the content to life a bit better than your average boozy magazine launch.

Let’s talk about the seriousness. Because I saw the last issue of Protein Journal all over the place – it must have had a very broad audience, and yet as you say the content is quite serious and specialist. What are your underlying aims of the Journal?
There are several aims – going right back we started out online with the Protein Feed, which was web-only. That’s what the first incarnation of Protein Journal grew out of. It was on newsprint, printed by The Newspaper Club, and it presented an edited form of the content from the site over the past quarter. It was really intended as a sort of tangible calling card for the business; it was something that could be given to people who might not have otherwise read our content.

But Will [Rowe, Protein’s founder and CEO] wanted to up the editorial credibility. He wanted to create a much nicer, properly polished publication, because now the aim is for Protein to extend its own media brand. As an agency Protein helps clients develop their media – we consult on and sell advertising space across our network, we create content for brands, and now we’re becoming a media brand for ourselves.

And at the same time the Journal helps to express the personality of the agency – we use it to talk about the kind of culture that Protein is involved with and interested in, so it has several functions.

In terms of the distribution, you’re right that it’s been very widespread. We’re actually narrowing it down for the next issue because I think we went too wide, and we’re realising that it’s better to concentrate on particular locations and particular types of stores, where the sort of person who is interested in this kind of cultural content would be. 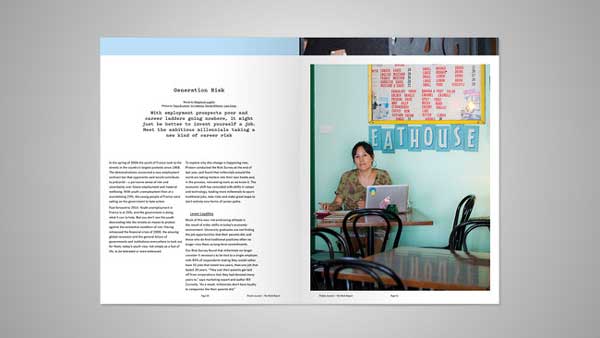 There’s the more magazine-y part of the Journal and then there’s the Report, which comes in the middle on different paper, and is very insights-based. It reminds me of what you do with the Protein Audience Survey – do you see this as fitting within a family of titles?
Exactly. There are two sides to our output – there’s the Protein brand side, so the more consumer output, which discusses culture and has opinions on it. And then there’s the client output, which is stuff like the Audience Survey, which is still reporting on what’s going on, but it’s delivered in a snappier way that ultimately gives those clients a recommendation on how to react and respond. So we’re not just reporting information – we’re analysing it and thinking about how a brand fits in, and how they should present themselves.

But then the Report almost sits between the two. It’s a little bit more in depth – it’s got a higher level of analysis, and it’s for people who might be clients but it’s not going to directly tell them what to do. And at the same time it’s hopefully a good read for anyone who just happens to come across it.

If I were to characterise the content in the magazine itself I’d say it focuses on creators and the things they make – does that sound about right?
Yeah – I think so. We’re very interested in people who have new ideas – our editorial remit is that we feature someone if we believe they’ve got a new way of looking at something, or they’ve developed a new product, or there’s something about what they do that indicates a change in thinking generally. 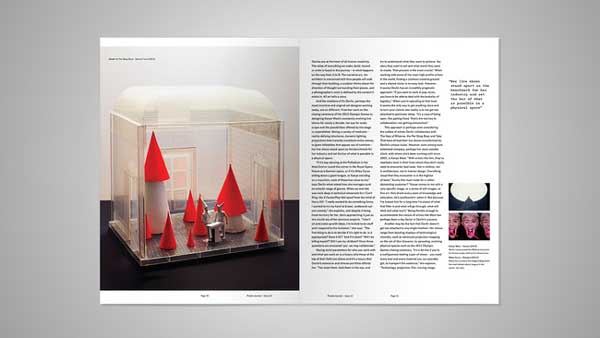 You put set designer Es Devlin on the cover – what was it about her that embodied those values?
This is the first time we’ve put somebody on the cover, and next issue we’re quite open to changing again – we’re experimenting with what we think works best. I think there was something about Es Devlin, in her approach to her work, that felt like it fitted in nicely with the approach of the Report. She’s a bit of an unsung hero, in that she works for other people who are the ones in the limelight, because they’re musicians and stars and that’s what they do – people like Kanye West or Miley Cyrus.

Did you see the interview with her in Riposte?
I know she was in Riposte but I haven’t seen that interview. When you’re aware that someone else is featuring her around the same time you sort of think, “should I read that, or will it give me opinions of who she is and what the story should be”? So I tried to stay agnostic and totally avoided it. Did you read it?

I did, and it’s interesting to see the different ways the two magazines went about interviewing the same person. Whereas Riposte went for the angle of her as a person, and as a woman, yours seemed to be more about the work, which I suppose is in keeping with what you’re doing with the Journal.
When you write an editorial profile about a person it’s important to bring out their personality. You talk about the work and there’s a degree to which their personality is going to affect that, but as I say, we look for the ideas first and we hope that gives us an edge, or at least a point of difference. 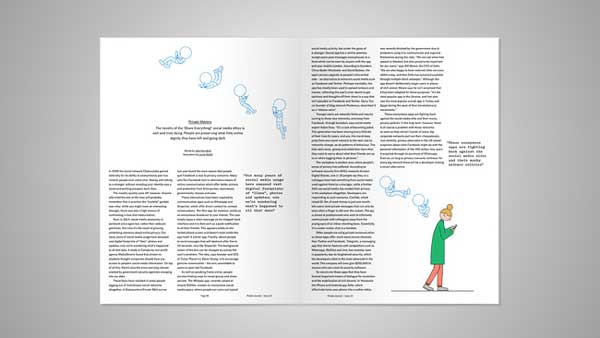 You mentioned that the Journal is an on-going experiment – where do you think you’ll take it next?
We like this format of having an editorial magazine about new ideas and the people behind them, and then in the middle having the deeper Report, where we can explore a theme in more depth. We’re definitely going to stick to that, but there are certain things we’d like to develop.

For example in this issue we’ve got an Observations section, which is something we didn’t have before. We used to be very much about people, but I want to push features that comment on things that are going on and affecting us. That could be a report on a new attitude we’re seeing, or a new zeitgeist; for example in this issue we talk about the overwhelming growth of online content, and the feeling of there never quite being an end to it.

I think what we’ve developed so far is a magazine that’s good at reporting new stuff and analysing it, but I’d like us to have more of an editorial voice, so a sense of what really excites us as a magazine. I think that’s the hardest thing as an editor; it’s not just knowing what story fits in – it’s how to tell that story with an opinion and a voice… and that’s the next challenge.

Discover more independent magazines. Sign up to Stack and we’ll deliver a different handpicked title every month starting from just £5.50 per magazine