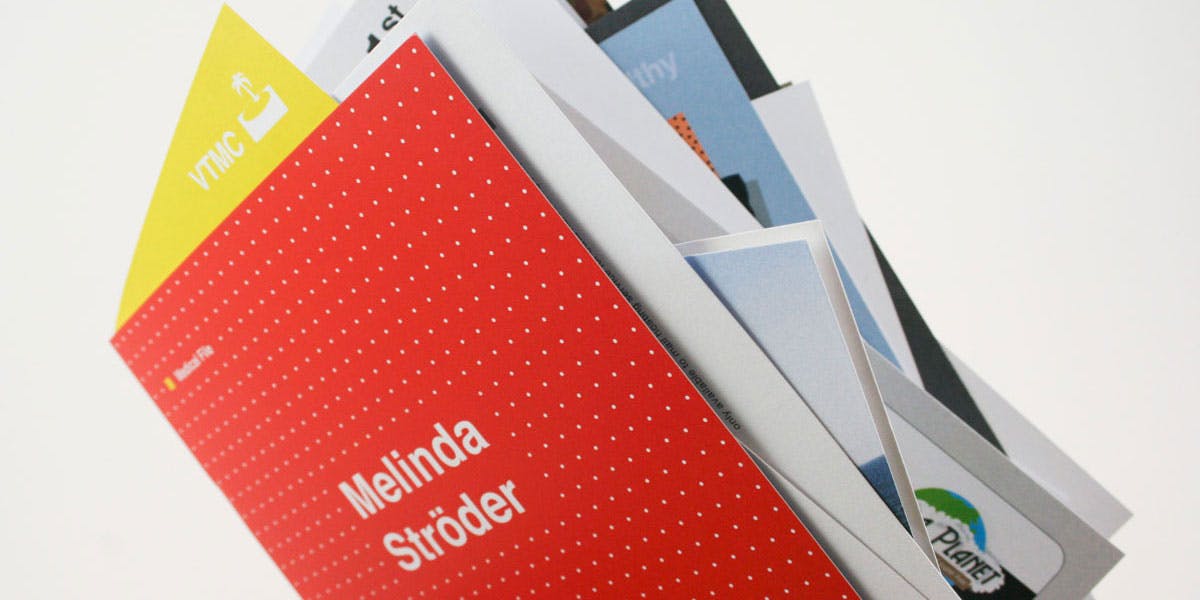 In the summer of 2012, Nanda Meijer, Sim Kaart and Tom Janssen found a zine on the floor of a music festival and thought: this doesn’t make sense and it’s put together quite badly… We could do this!

Thirty issues later, and their magazine Voortuin is dead. It’s upsetting, because what they made was unusual. One particularly memorable issue was presented as a scrumpled up mass of papers from a medical file: on closer inspection, every page betrayed some intimate detail of the life and mind of a woman called Melinda Ströder. As you unfolded each document, a picture of a life and a mental illness emerged. Melinda was imaginary, but it was hard to know that. Opening the magazine felt like a kind of snooping.

But now, ground down by day jobs and instagram kids, the editors have decided it’s time for Voortuin to die. They wanted to go out with dignity — “to have a neat headstone on top of Voortuin’s grave” — so they’ve created a digital archive so people can read every issue online.

We caught up with Sim to express our condolences. He talked us through the highlights, and explained why he’s grown out of nihilism, and into Netflix. 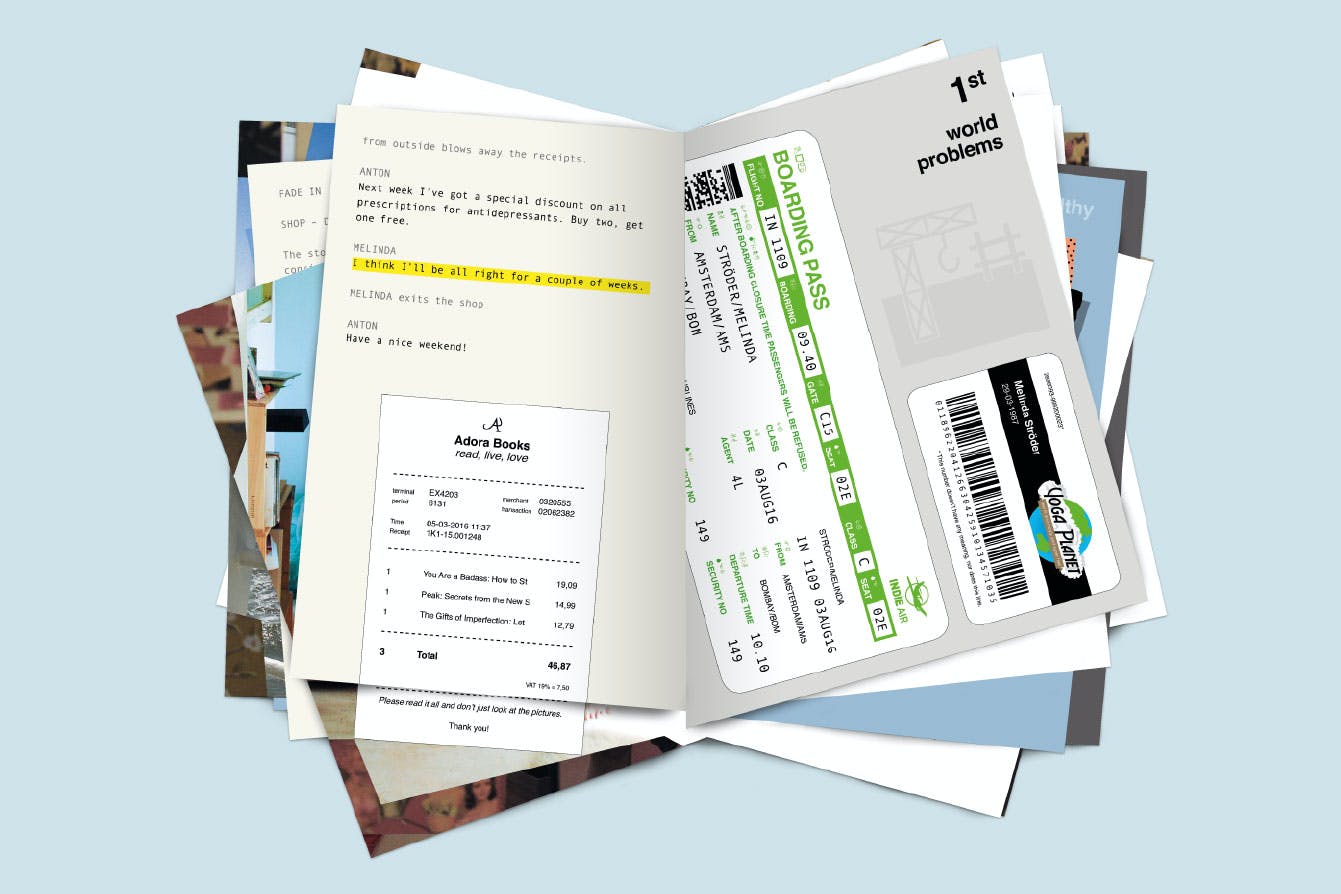 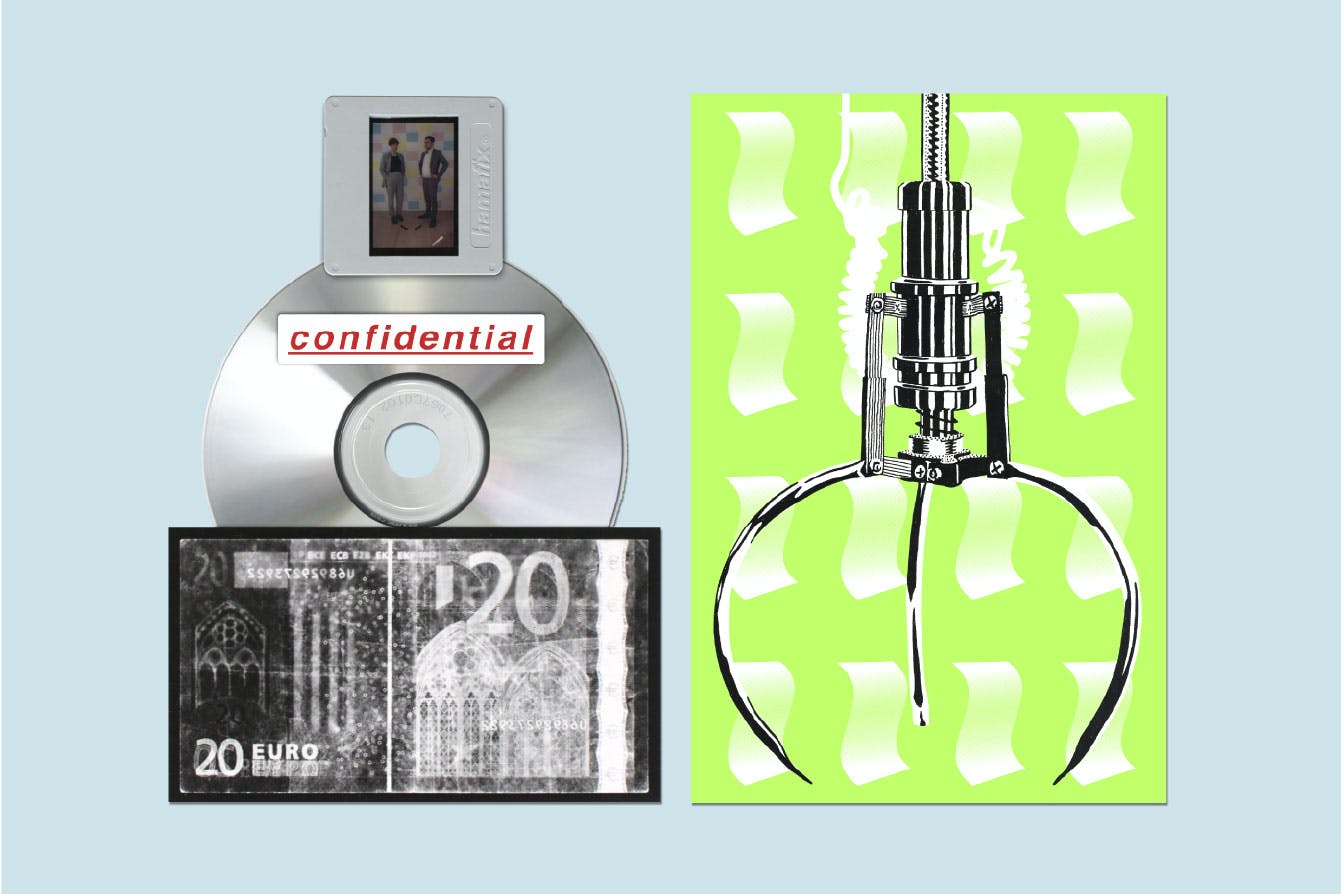 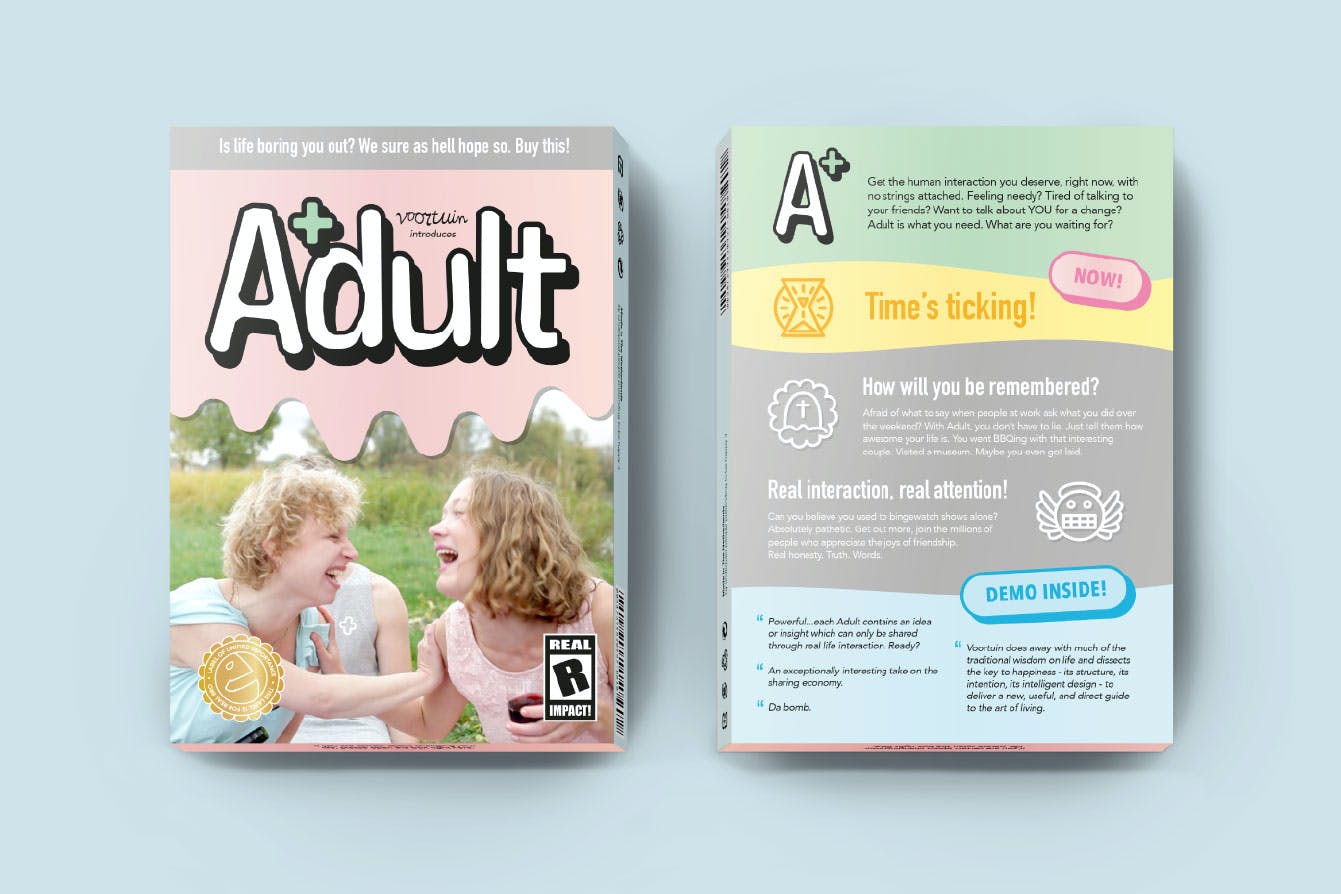 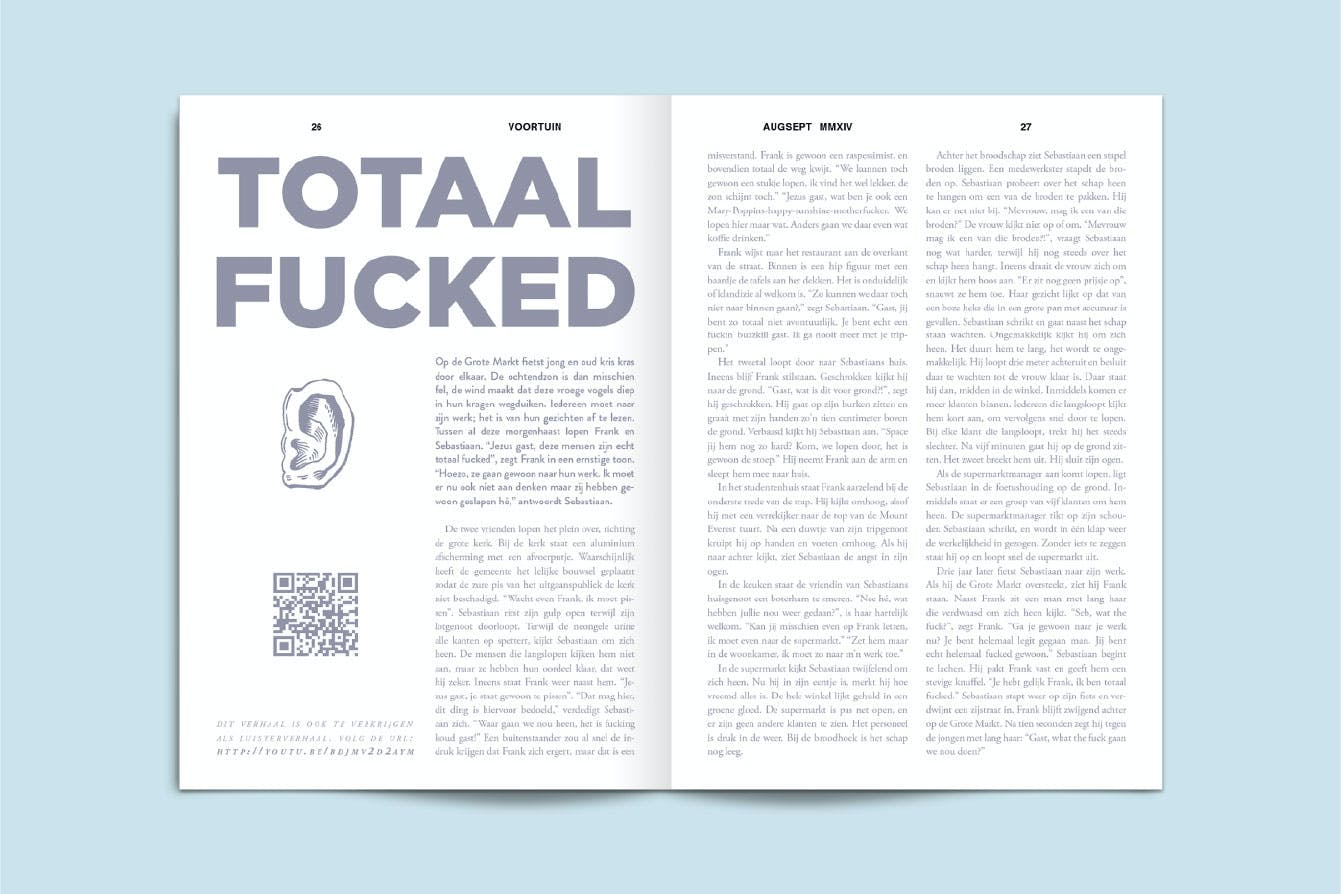 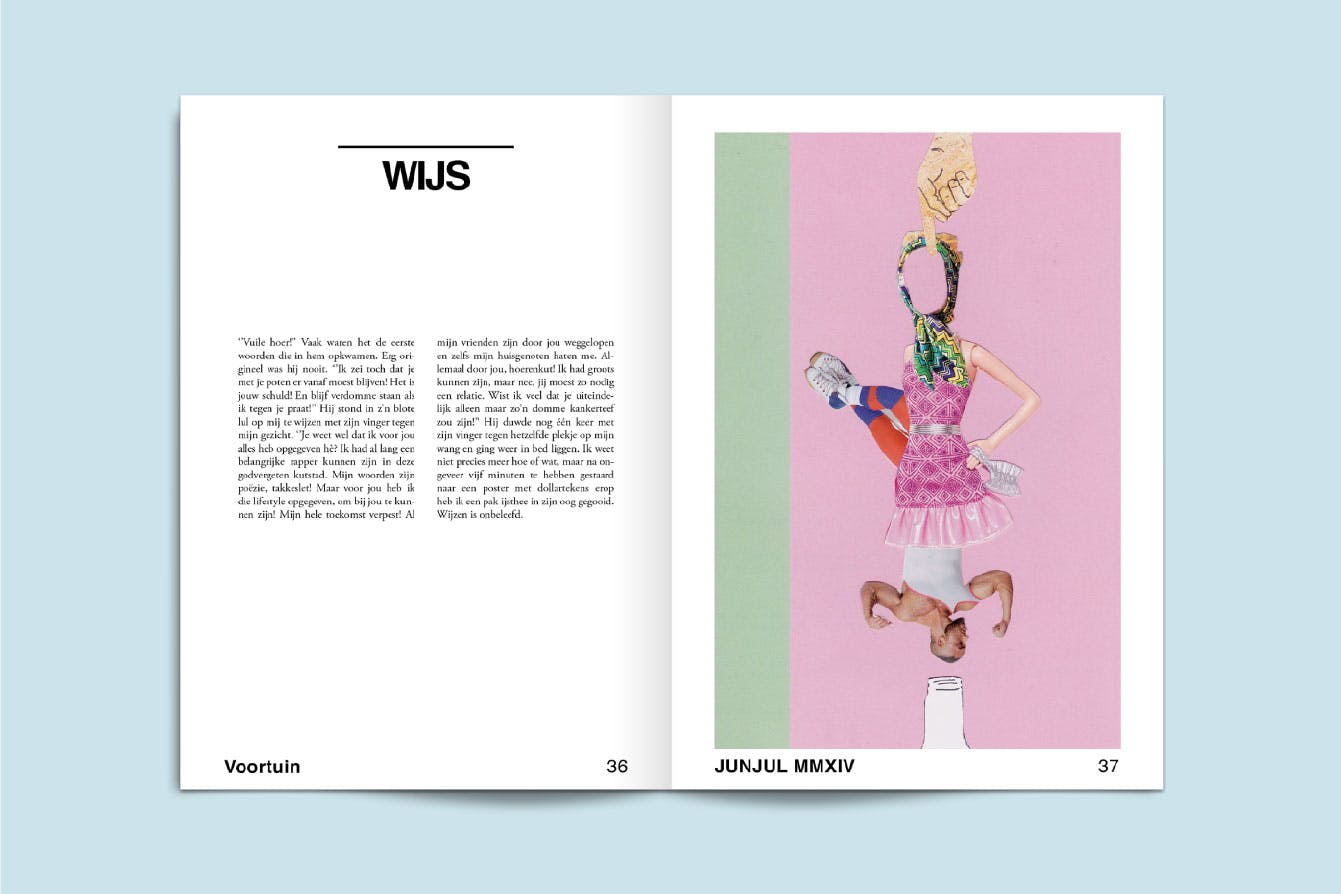 You say you stopped making Voortuin because you’ve been demolished by day jobs. How have they demolished you?

The kind of creativity that helped us make Voortuin was best driven by a lot of free time and a lack of money. The first few years we were just out of college and didn’t have ‘real’ daytime jobs. Voortuin started out as a joke, but it became our main creative output. It was the ‘thing’ everyone knew we did and our reason to set an alarm clock. We’ve slowly got better employment, and started getting richer and fatter. Now we work almost everyday. When we get home we order sushi, sip red wine and watch Netflix. We’re totally fucked.

There is an edge of nihilism that undercuts every issue of Voortuin. Are you particularly nihilistic people? Or are we living in a nihilistic age?

I guess you could say we were pretty nihilistic. It probably had to do with being in our twenties and getting sucked into the black hole of “what to do with my life?” That felt like a never ending contemplative state to which nihilism was a great answer. If nothing matters, it doesn’t matter what I do. Therefore I don’t have to make decisions concerning the greater trajectory of my life. I think that’s a phase, not an age. But it may be more apparent in a time where to us (western kids) ’everything’ is possible.

We’ve slowly got better employment, and started getting richer and fatter. When we get home we order sushi, sip red wine and watch Netflix. We’re totally fucked.

You’ve decided to kill off Voortuin because you’ve been “overrun by instagram kids and happy parents”. Are they your kids? Or just annoying parents showing off their kids on instagram?

The latter. But also something else: the ‘insta kids,’ as I like to call the next generation of makers, are the ones that seem to be so prolific that it feels almost impossible to keep up. It’s not that any one creator makes more things than I thought possible, it’s just that instagram (and Behance and Dribbble for that matter) are so overrun by all the work that’s being made, it feels like there’s an infinite amount of great stuff out there. That, of course, is nonsense though, since it’s easy to make stuff. But it’s hard to make stuff that has any kind of real meaning.

What was the most meaningful thing you made with Voortuin?

The coolest were the most complicated and unfeasible. For Melinda Ströder (#29), all of the pages were folded by hand and bound in a particular way no machine could. Fun fact: Melinda Ströder is an anagram for Mental Disorder and the anagram is an analogy for the concept of piecing together a character, follow?

And for Business Time (#28), we thought about the little package with printed stuff you get when you go to a conference. We stuffed a package with as many types of media as we could manage: a silk screen, an old school photo slide (we made a different picture for each copy of the mag), a riso print, a unique photo print of money, a compact disc, an archival divider and a business card. Most of these items then lead the reader to a website where the stories behind each item could be found.

But we also made a lot of trash.

This all made no sense at all and I’m not sure if people even liked it.

Tell us about the trash.

I would say Gezellig (#22). For that issue, we created an ordinary magazine, but went rampage with the design. We made one big mess, printed out all of the spreads, started drawing on them, scanned them, printed them out again, et cetera. All we knew is that we wanted to add in the word ‘Gezellig’ (which is dutch for ‘socially cozy’) on every spread and a horse on every corner: that would ultimately turn the corners into a flipbook animation. This all made no sense at all and I’m not sure if people even liked it.

Then there were some really bad things we made as well. Not even to be categorized as trash, but just as plain wack. For example the audio story in #19 featuring ‘Totaal Fucked’. We recorded it in one night with a couple of friends, added in some sound effects, did some mastering and put it online. We didn’t know what we were doing and you can really tell.

What was the straw that broke the camel’s back? The thing that really convinced you that making another issue was impossible?

We did an overhaul of our visual identity so that it would have a better online presence and would be more recognizable. We thought we could be rude, make unexpected jokes and do things for no apparent reason online. After we uploaded all the profile pics and went live, the magic seemed to be missing. Making something physical helps to set deadlines and impose constraints. I guess this wasn’t just easily translated to other media. So doing a subtle rebrand may function as a last resort, but it may just as well result in sudden death.

Your most recent publication is called ‘ADULT’. Intriguing. What’s it all about?

Hmm. Well, it’s a ‘demo box’ for a fictional product: Adult. The idea is that there are stores around the globe with these products for hire. You can walk in, hire Adult for a day, have some fun with them and then take them back at the end of the day. Just like renting a bike. This idea was inspired by the fact that people desire real life interaction and social engagements, while being glued to their screens and anxious to try out new things. So we tried to fix this by giving them real human beings (Adults) over which they have full control. A bandage for modern times.

You know that forty-year-old dude at the bar who reminisces about all the great punk bands he was in twenty years ago? You don’t want to be that guy.

Are you feeling less nihilistic these days? Is part of the reason you’re killing off Voortuin that you’re actually happier drinking red wine and watching Netflix?

Ok. This is personal and different for all of us. But in general, I can say that, while being nihilistic can be fulfilling at times, it can also get in the way of fulfillment. You know that 40-year-old dude at the bar who reminisces about all the great punk bands he was in 20 years ago? You don’t want to be that guy. That may imply you’ll have to watch Netflix for some years while cooking up new ideas. But I think the end goal here is to be 30, 40, 50 or 60 years old and still be able to say: ‘Look what I just did this morning. This is the best thing I’ve ever made.’ 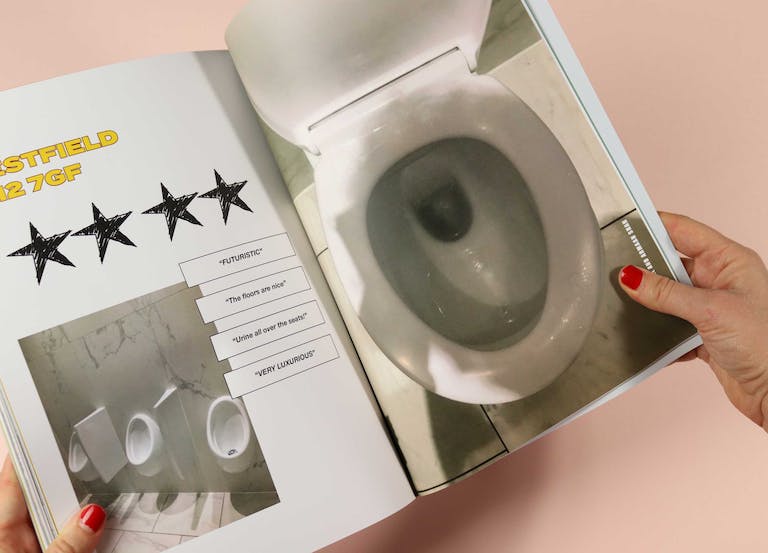 A magazine about... toilets! 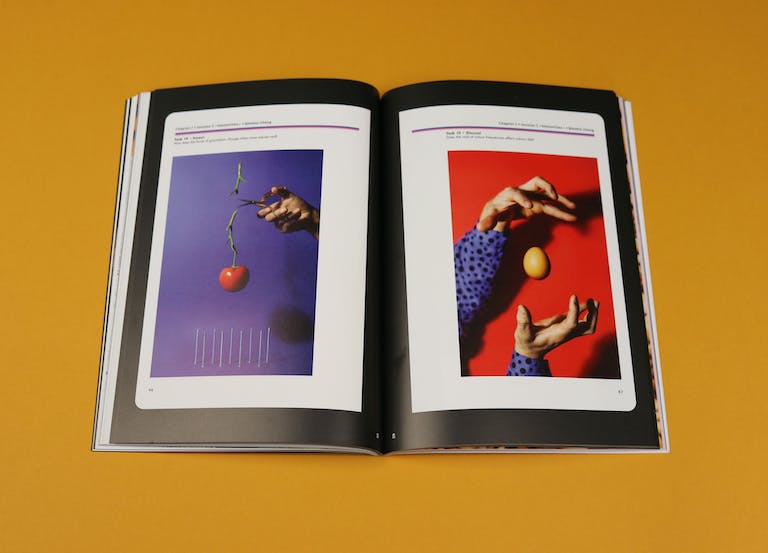