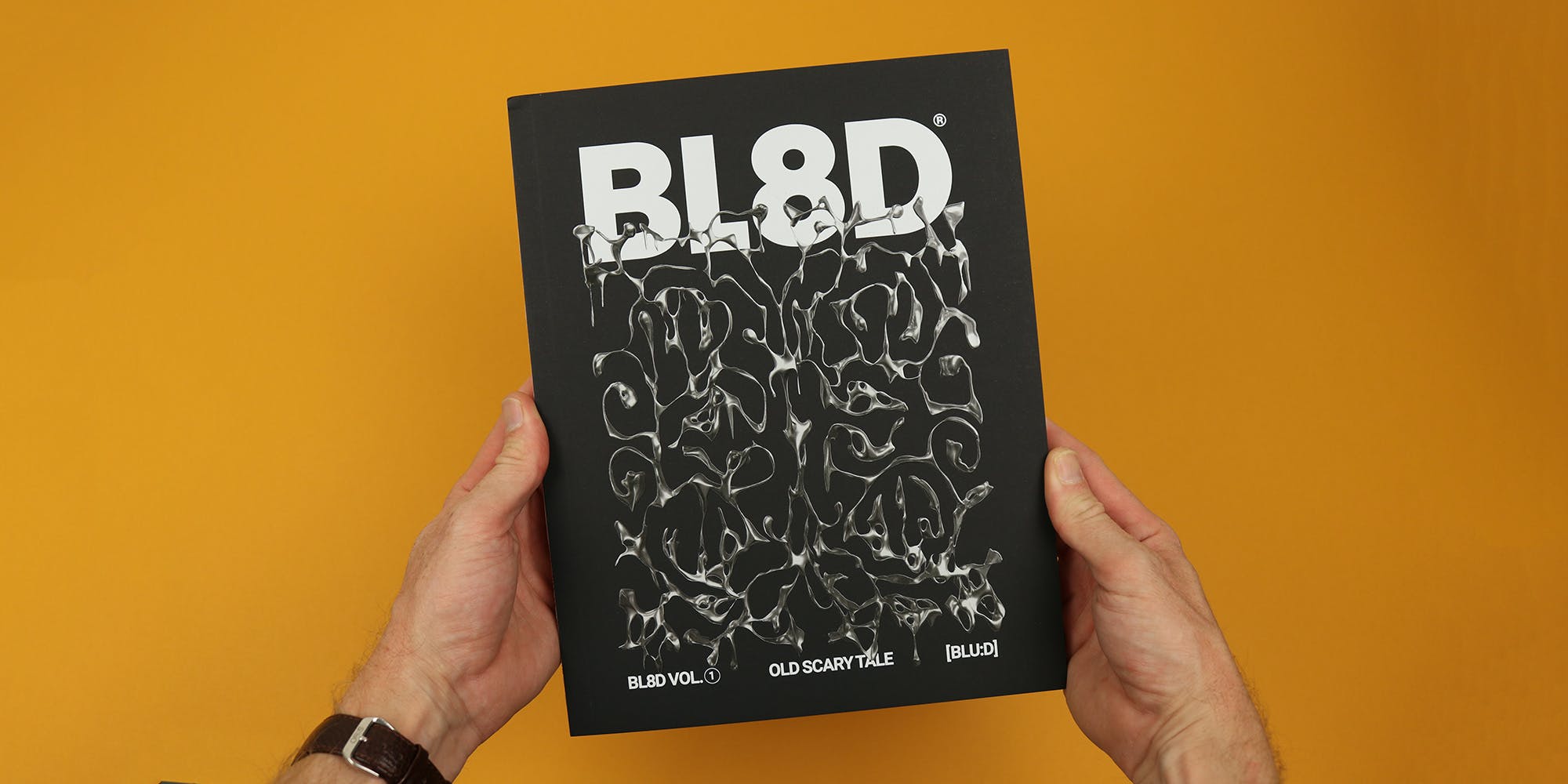 A Russian voice on the war

I’m writing this the day after Russian missiles and drones attacked Kyiv, Lviv, Dnipro and other Ukrainian cities. Watching the news last night, and reading reports today of GCHQ claiming that “desperation” is spreading in the Russian military and wider society, I was reminded of the opening letter in Bl8d, a new magazine that provides a dissenting Russian voice against the war:

“Reader, the magazine you are holding in your hands is our common anti-military manifest, our voice against the war. It is our anger and rage towards those who started this war, and those who still support it. It is our tears of helplessness and despair from the realization of Irreversibility of what has happened. It is our fears and an attempt to look at ourselves in the mirror to understand how this could have happened to all of us? It is a hope for the Light which one day will incinerate the Untruth and give us hope for Forgiveness.” 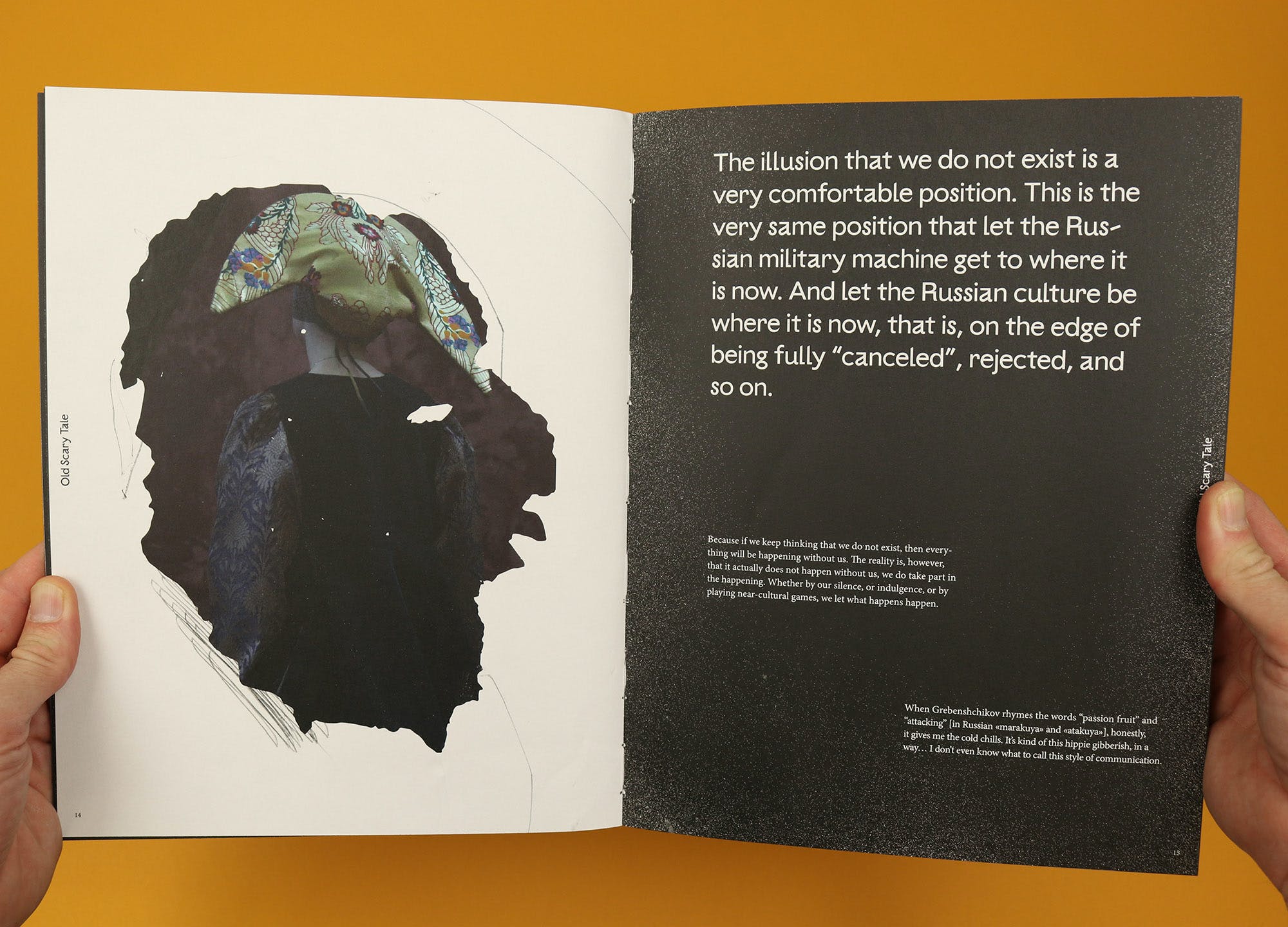 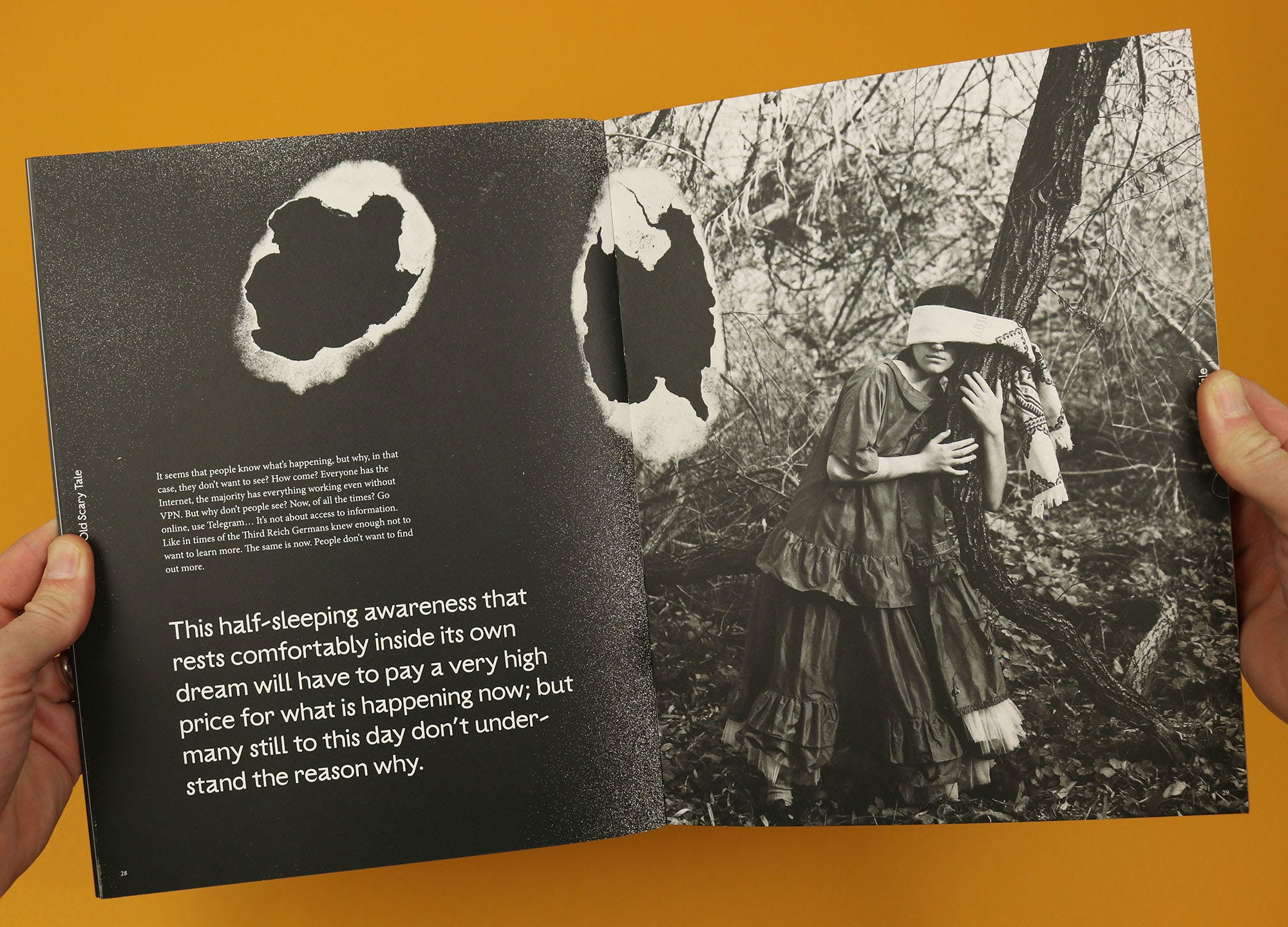 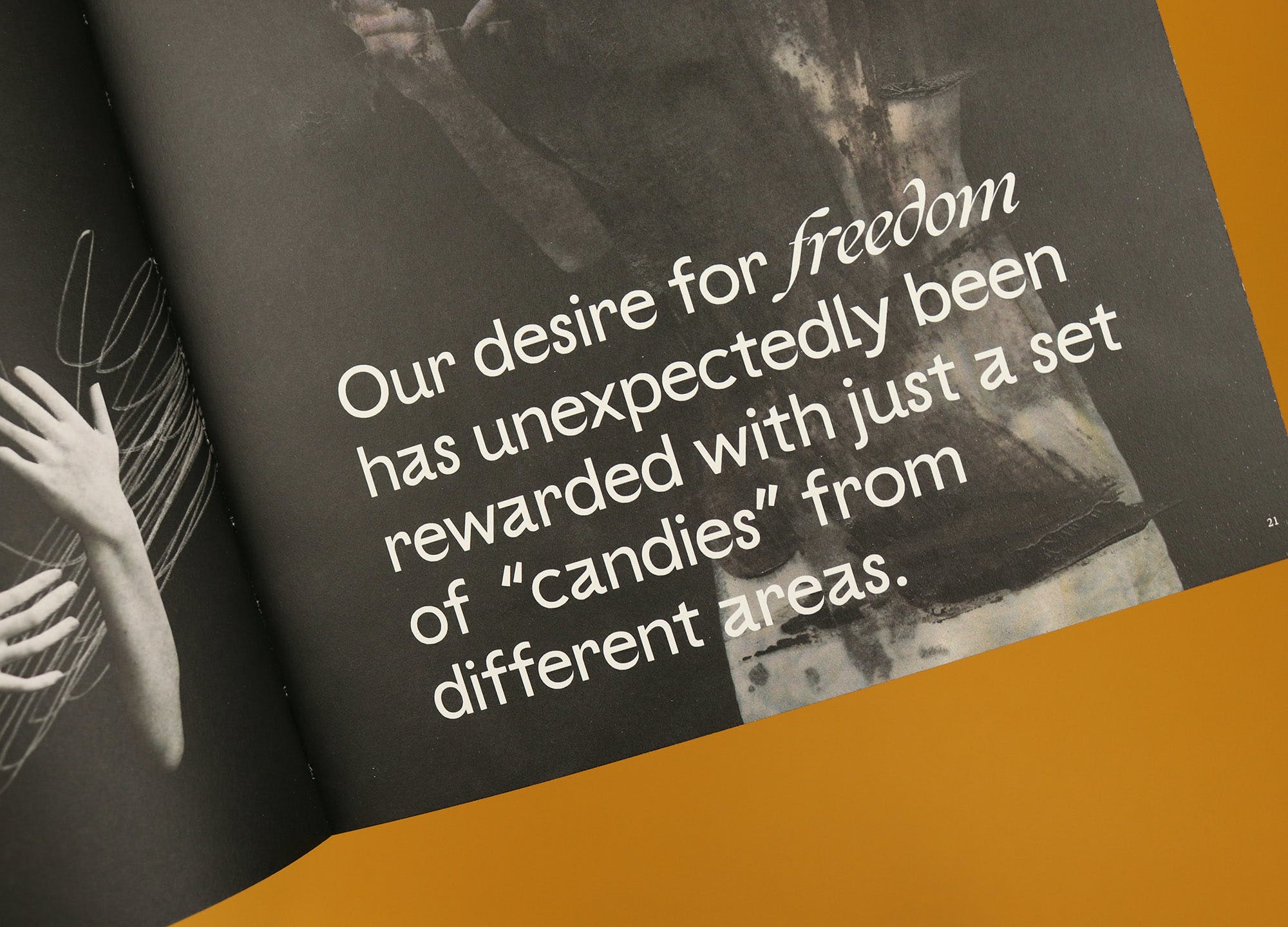 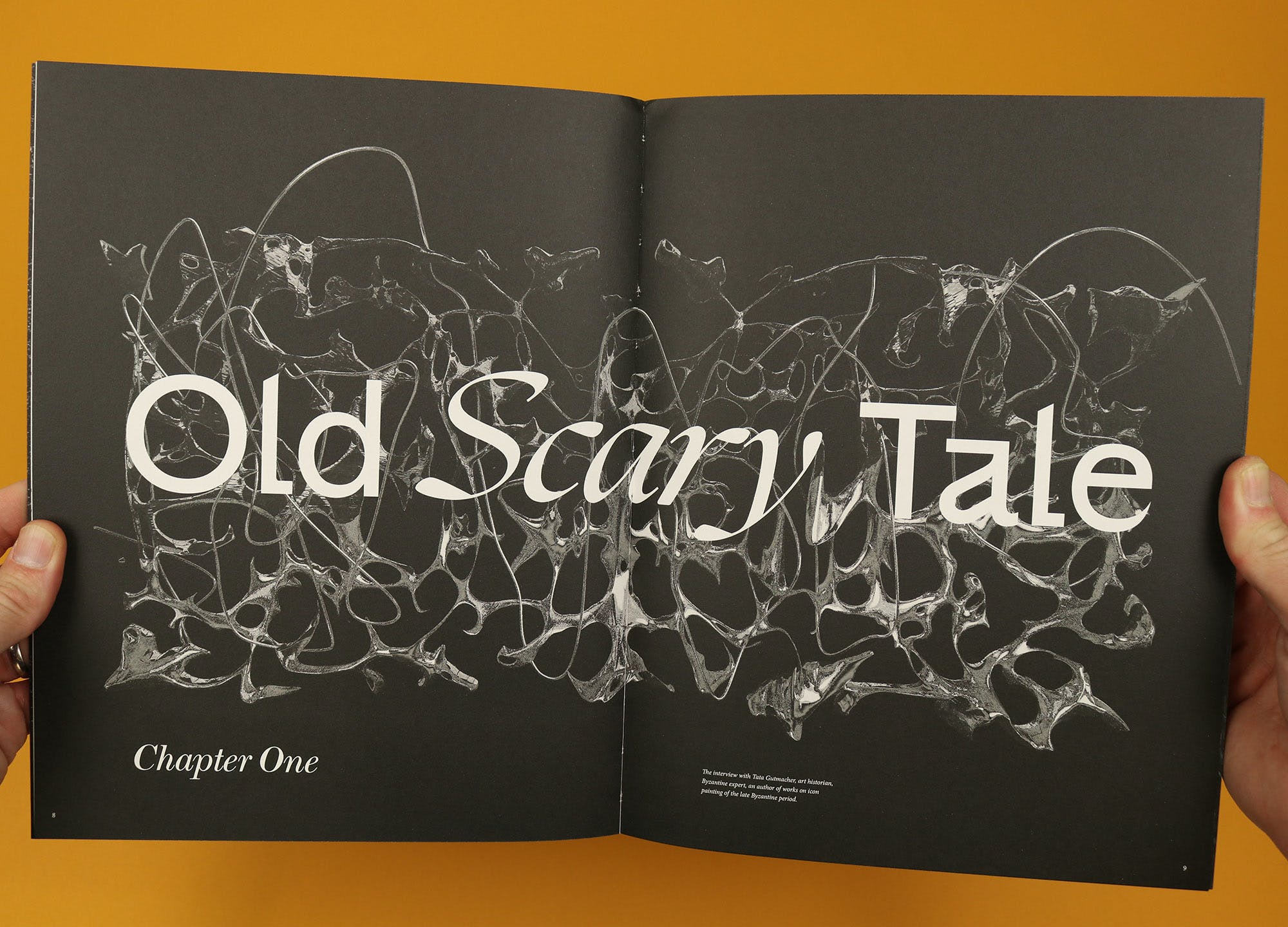 The opening letter explains that this is, “a bastard… a magazine that should never have been released.” The team had originally intended to make a 200-page trendbook, using it to investigate the essence of the “Russian code”, which I think means the underlying characteristics and influences of ‘Russianness’. The trendbook was ready to be printed, but when Russia invaded Ukraine they destroyed what they had done, and set to work instead on the project that became Bl8d; a magazine that records their disillusionment, shame and anger, and also tries to understand how this terrible version of Russia has come to pass.

The magazine is based around two interviews; one with art historian Tata Gutmacher, and one with museum researcher Denis Danilov. Their words are set alongside photography and artwork by several Russian contributors, some named and some anonymous, some living overseas and some still based in Russia. 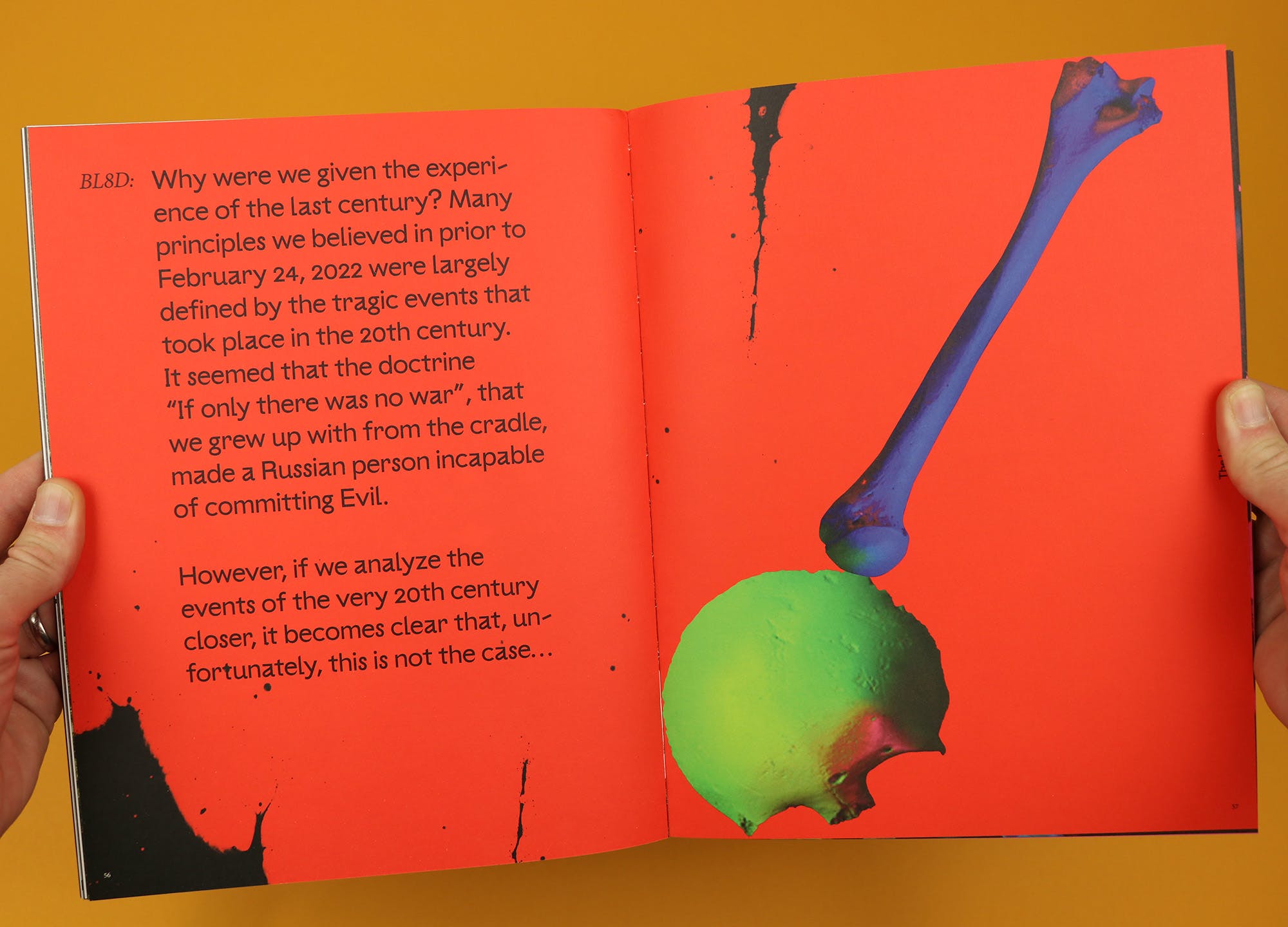 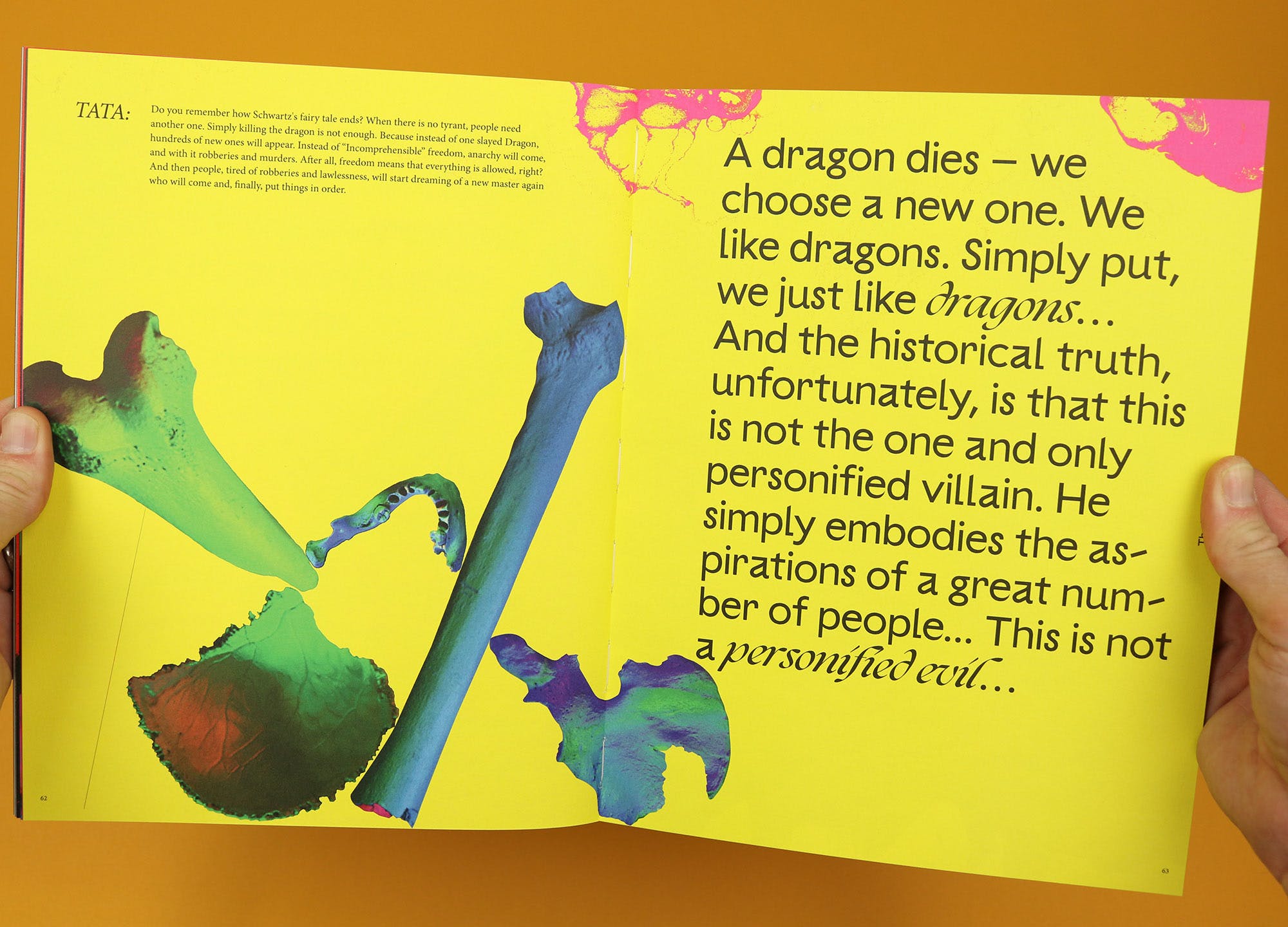 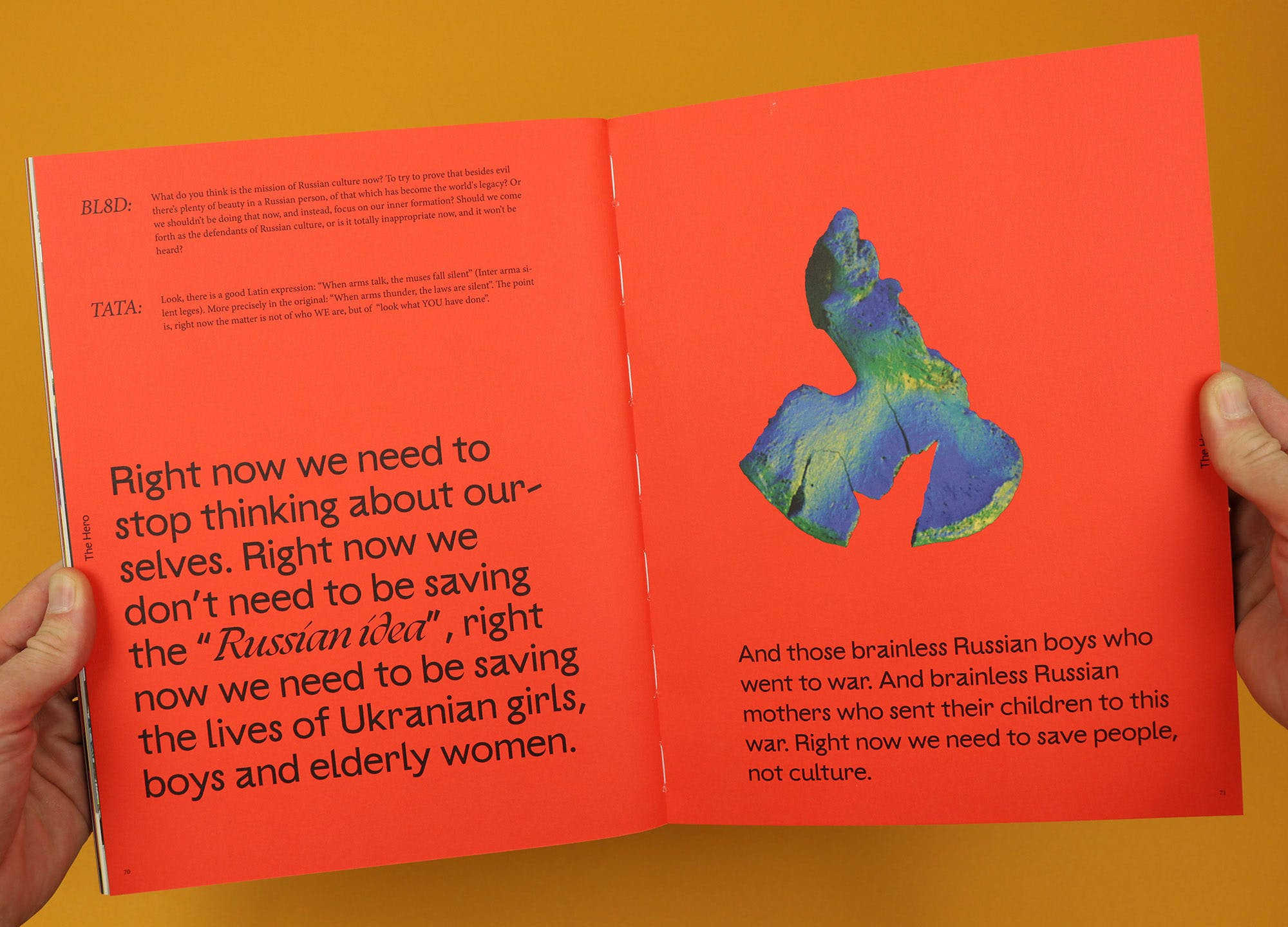 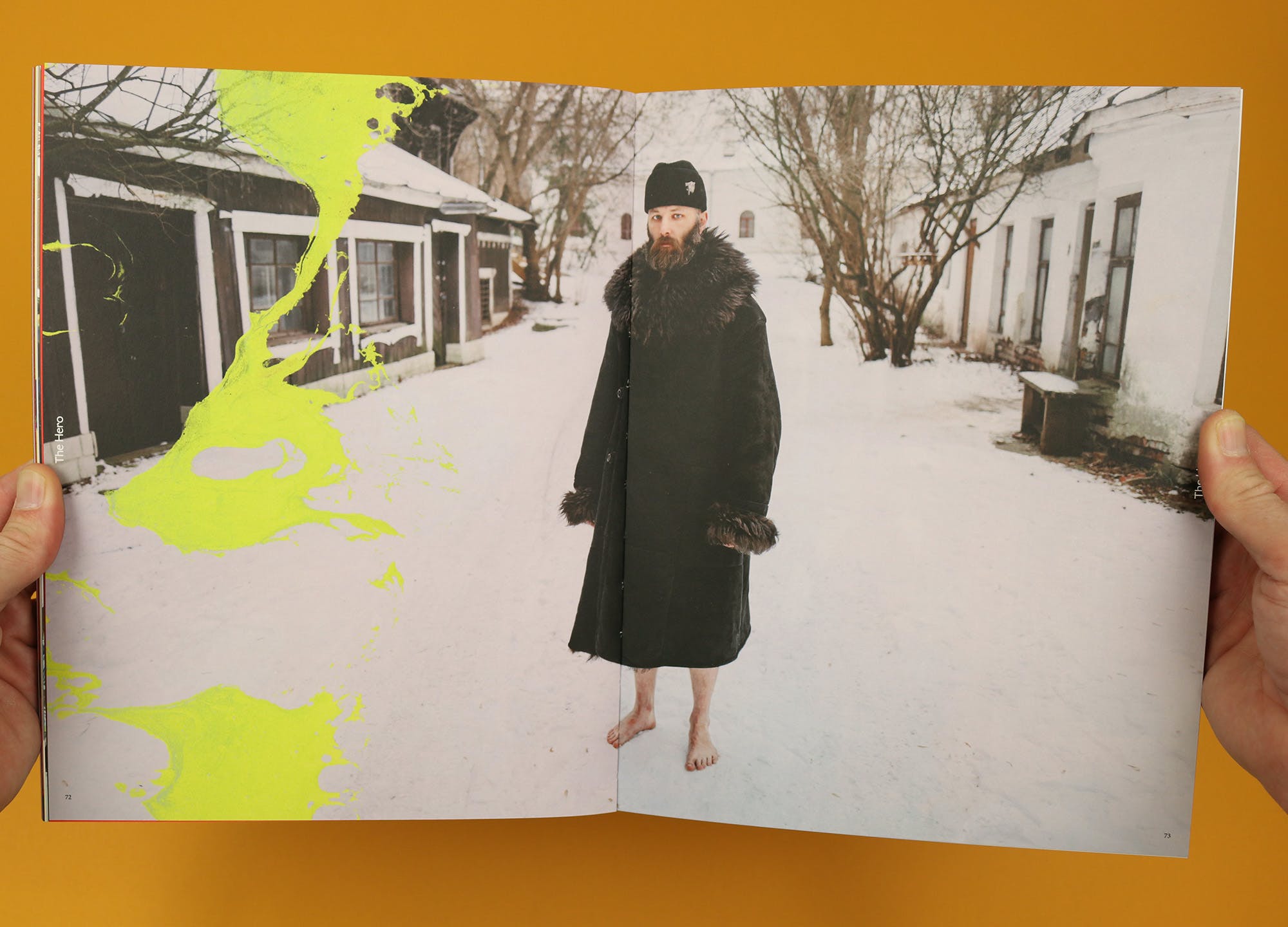 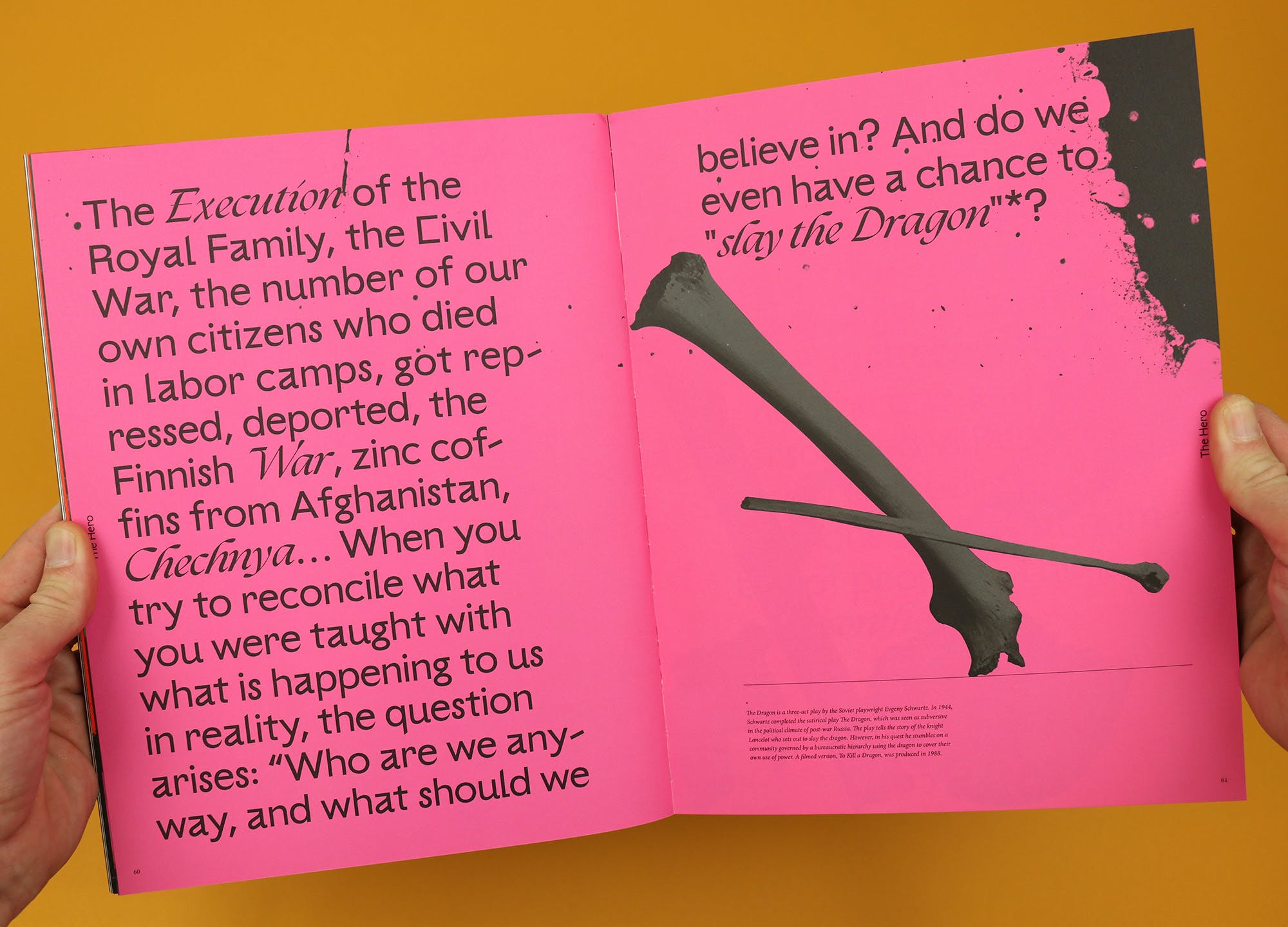 There are people who will think it’s inappropriate for any Russian perspective to be promoted at the moment, and probably even more who will feel offended by an attempt to aestheticise it in the way Bl8d does, with its abstract graphic design and its fashion and fine art imagery. But this is a beautifully humane publication and Tata in particular provides a fresh understanding of how at least some Russians are feeling in this moment.

There has been lots of coverage in the press of people leaving Russia and men being conscripted into the army, and western news outlets love to remind their viewers that Russian media is under strict state control. But Tata pushes beyond these facts to reflect on the “hippie gibberish” that she herself fell for in the past, which she says has sedated the Russian intelligentsia and allowed the “Russian military machine” to develop.

Of wider Russian society, she says, “Everyone has the internet, the majority has everything working even without VPN. But why don’t people see? Now, of all the times? Go online, use Telegram… It’s not about access to information. Like in times of the Third Reich Germans knew enough not to want to learn more. The same is now. People don’t want to find out more.”

Bl8d locates this unwillingness to know as something seeded deep in Russian culture, and it turns to fairytales to understand the motivations behid the self-deception. Seen through this lens Russia becomes a sleeping beauty, waiting to be woken from her sleep by some outside force. And there’s the suggestion that Russians seem to like authoritarian leaders: “A dragon dies – we choose a new one. We like dragons.” 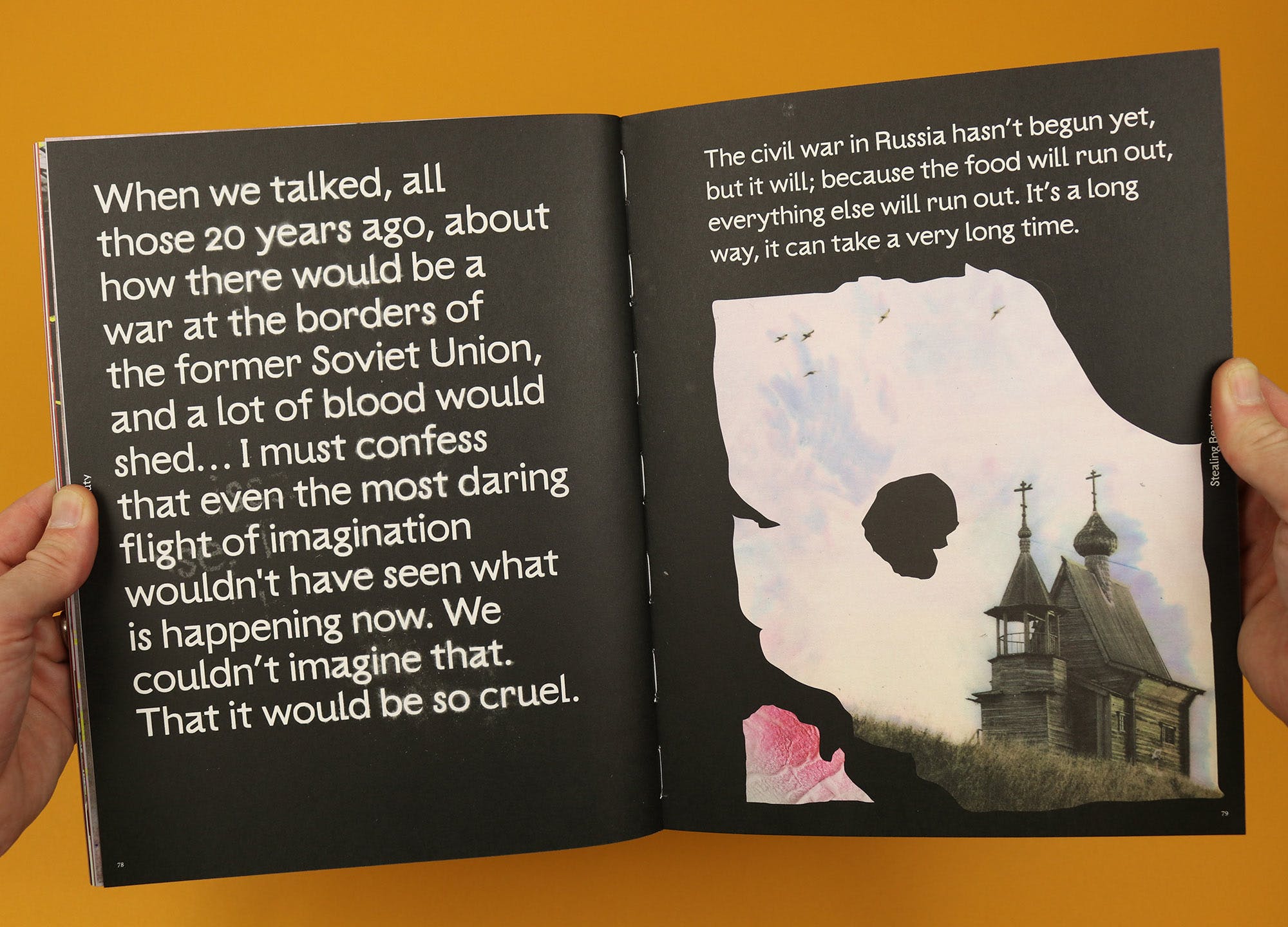 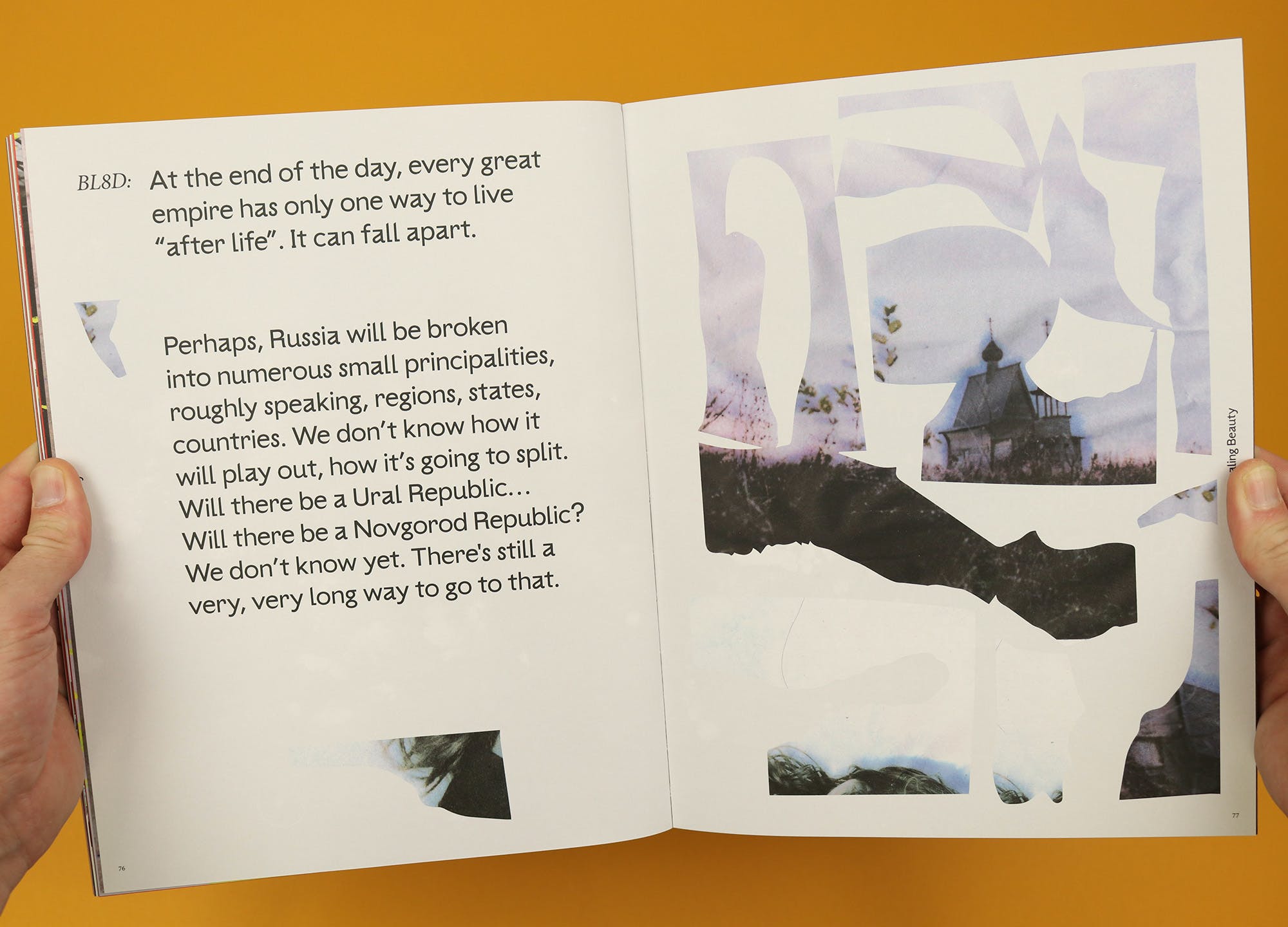 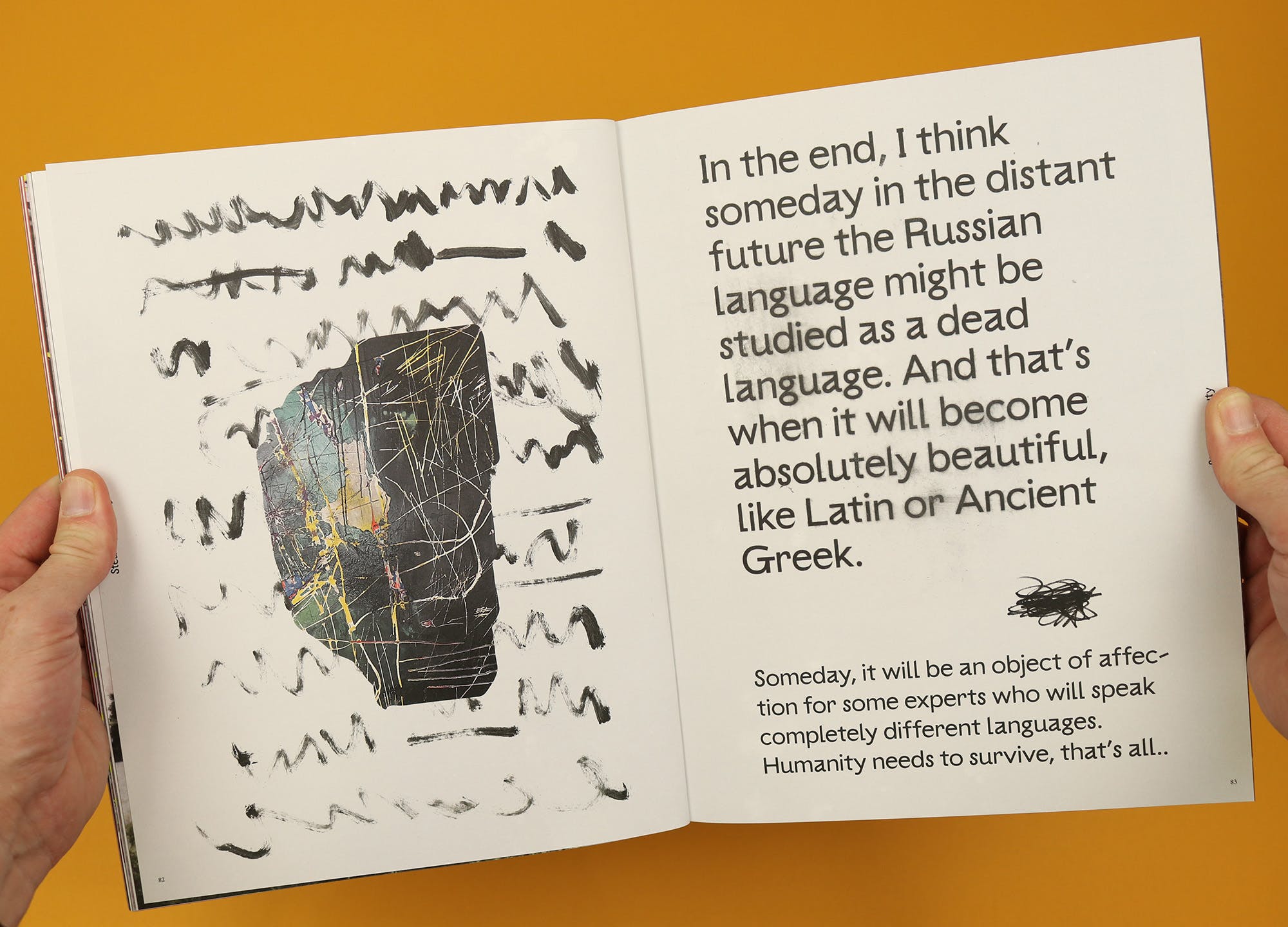 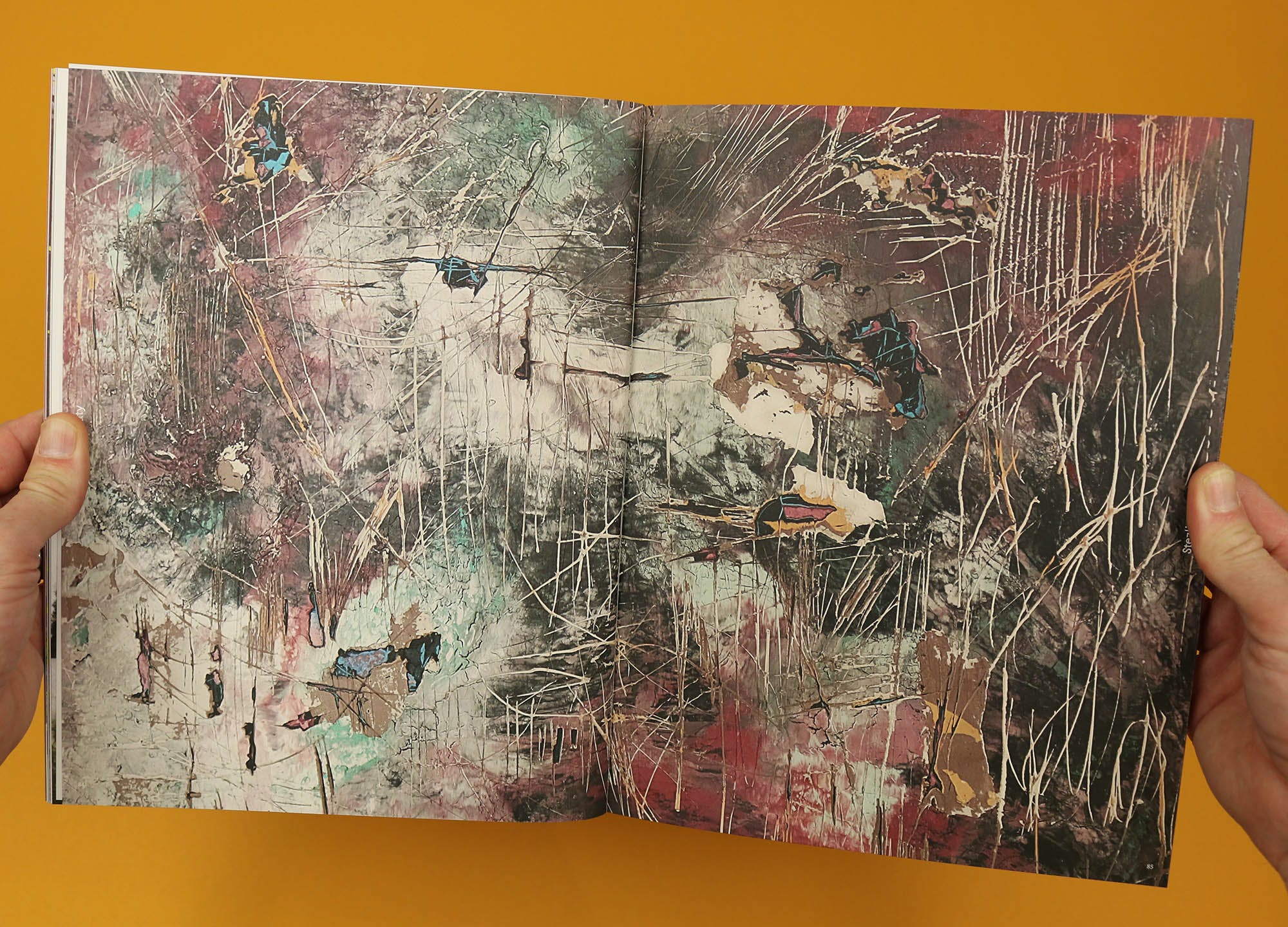 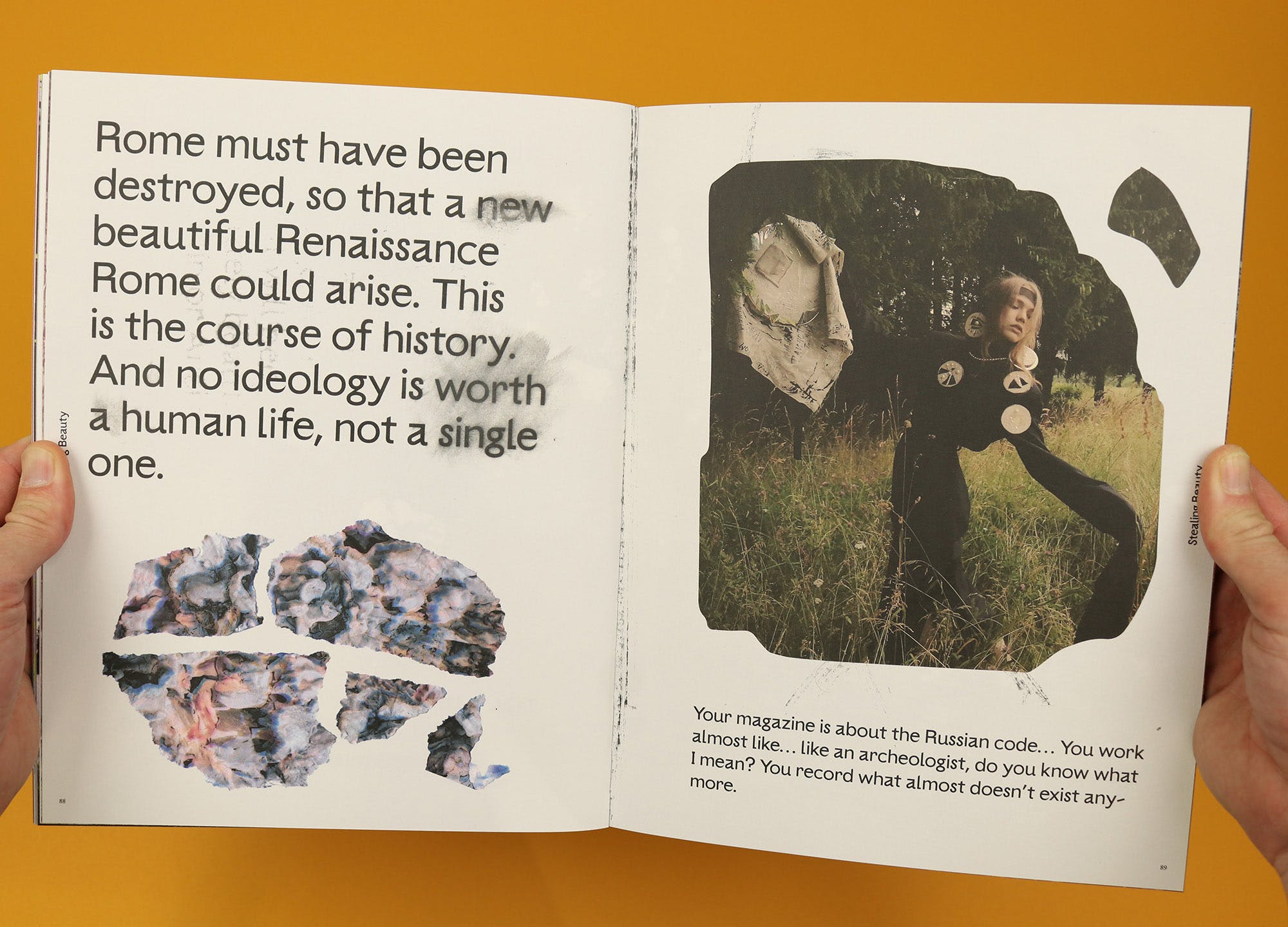 It’s an interesting attempt to understand the forces that run through Russian culture, but there’s also an acknowledgement that in the face of war, none of this matters. Weaving through fairytale and history, Bl8d asks, “What do you think is the mission of Russian culture now? To try to prove that besides evil there’s plenty of beauty in a Russian person… Should we come forth as defendants of Russian culture, or is it totally inappropriate now, and it won’t be heard?”

And as much as she clearly wants to see the end of the bloodshed, she predicts more to come, with a civil war that will spell the end of Russia as we understand it today. This beautiful and bleak magazine doesn’t offer much in the way of hope in the immediate future. Instead it uses self-reflection as a way to build bridges and offer the world an explanation for how we ended up where we are today. 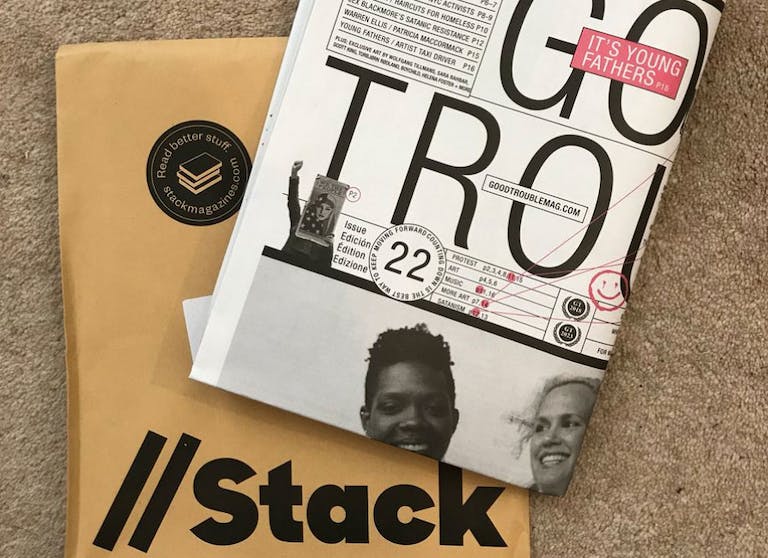 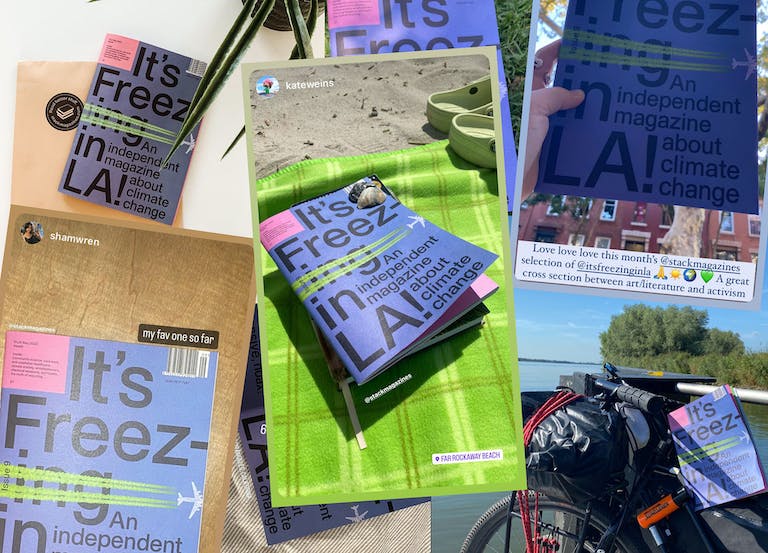