It’s very difficult to put Screen Shot magazine down. Short bits of ‘micro-content’ keep you hooked with sharp observations on current affairs, which lead to longer pieces reflecting on the way technology, visual culture and politics intersect. “We wanted a place where we could write about Instagram Stories and influencers and Amazon adverts in a way that is critical of the culture,” editor Shira Jeczmien tells me below.

Organised by date, it is an informative, engaging take on technology reporting, offering refreshing perspectives that draw from philosophy and critical theory in a playful, accessible language. It’s also a very visual magazine, with alluring still lifes and esoteric artwork that work to amplify the text. Find out more in our chat with Shira. 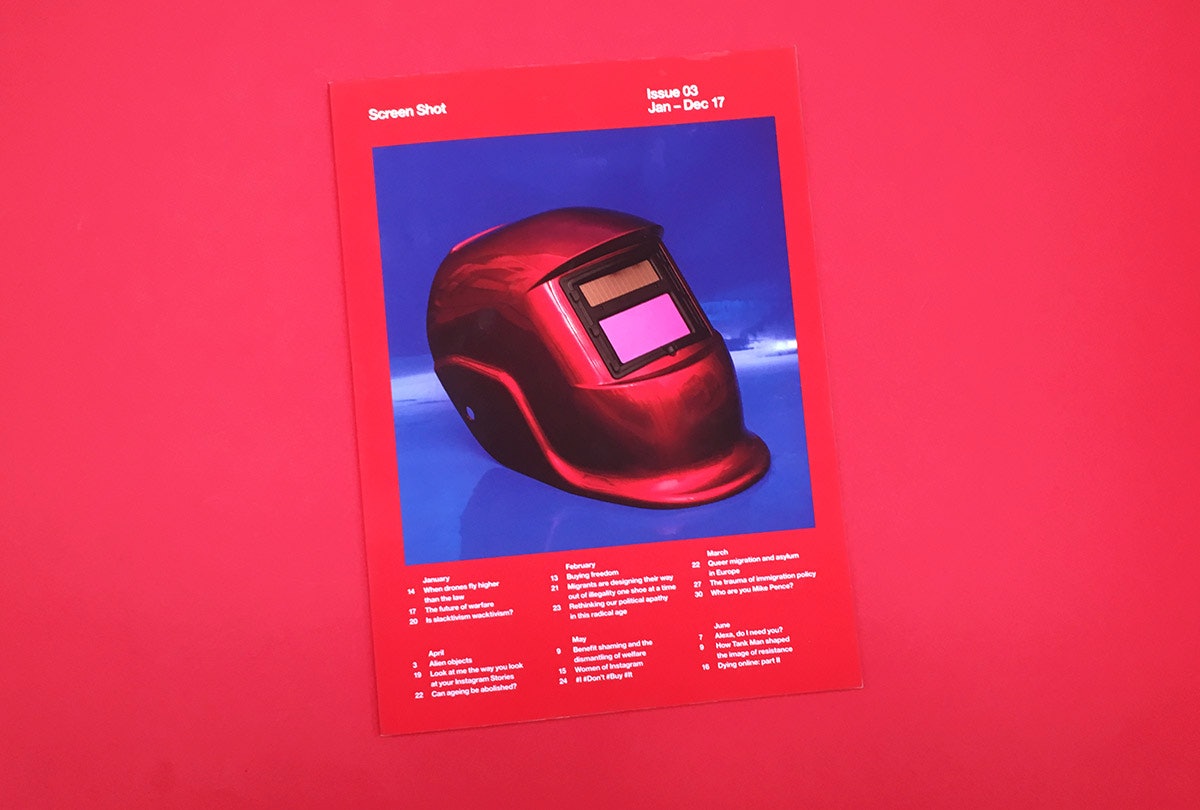 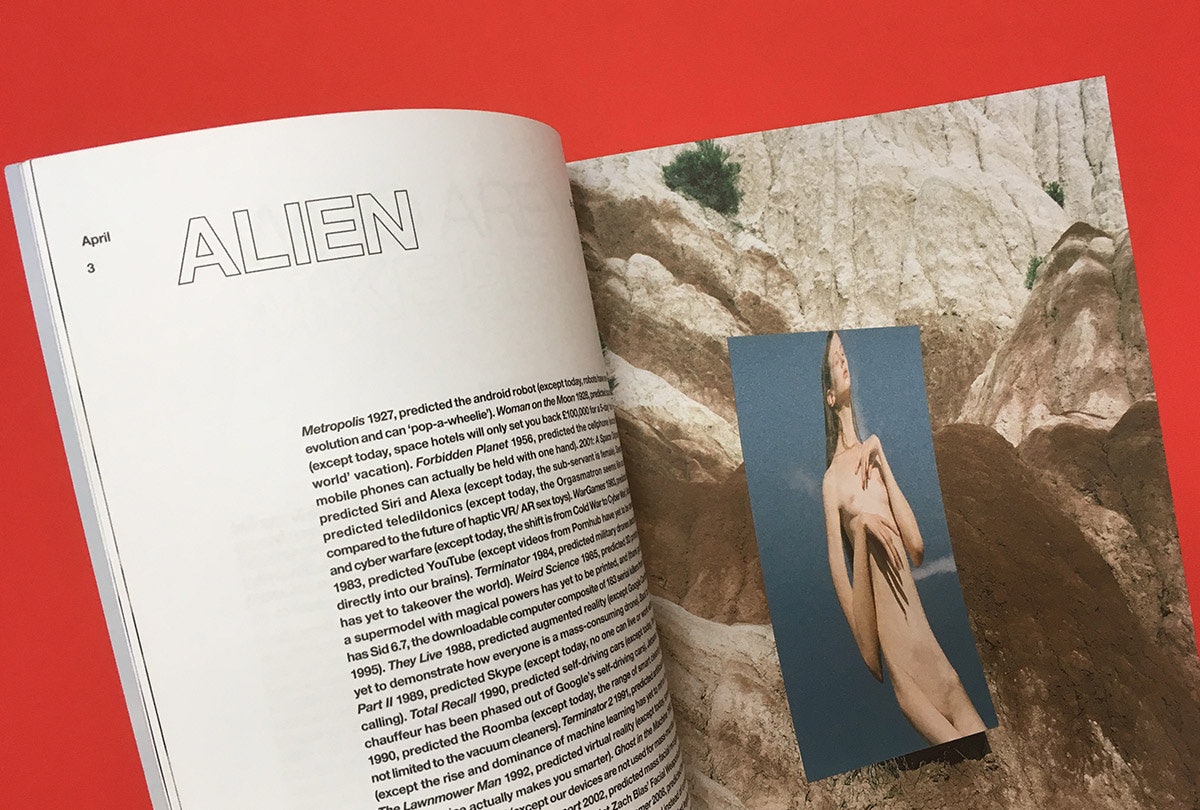 The magazine is just as much about technology as it is about the way people are living and organising themselves politically today. What was the gap in publishing Screen Shot wanted to fill?
It’s so great to hear your say that, in a way that’s exactly what we want our content to be – something between technology and human behaviour; a hybrid of the future and politics and social issues and how they all intersect and create really fascinating micro topics that are unique to today’s world. I mean, never in history has protest been questioned against hashtags, or identity against AI.

The gap we wanted to fill with our content is between current affairs and technological developments, but at the same time of what’s called visual cultures – the field that takes everything, from everywhere and meshes it together with theory and facts and hypothesis. The thing is that visual cultures is usually only studied in academia, but we wanted to take it out of that context and make it accessible and fun. We wanted a place where we could write about Instagram Stories and influencers and Amazon adverts in a way that is critical of the culture embedded inside these. Anything that happens is a natural progression of another happening, and we wanted to create a space where these intricate connections are not overlooked. 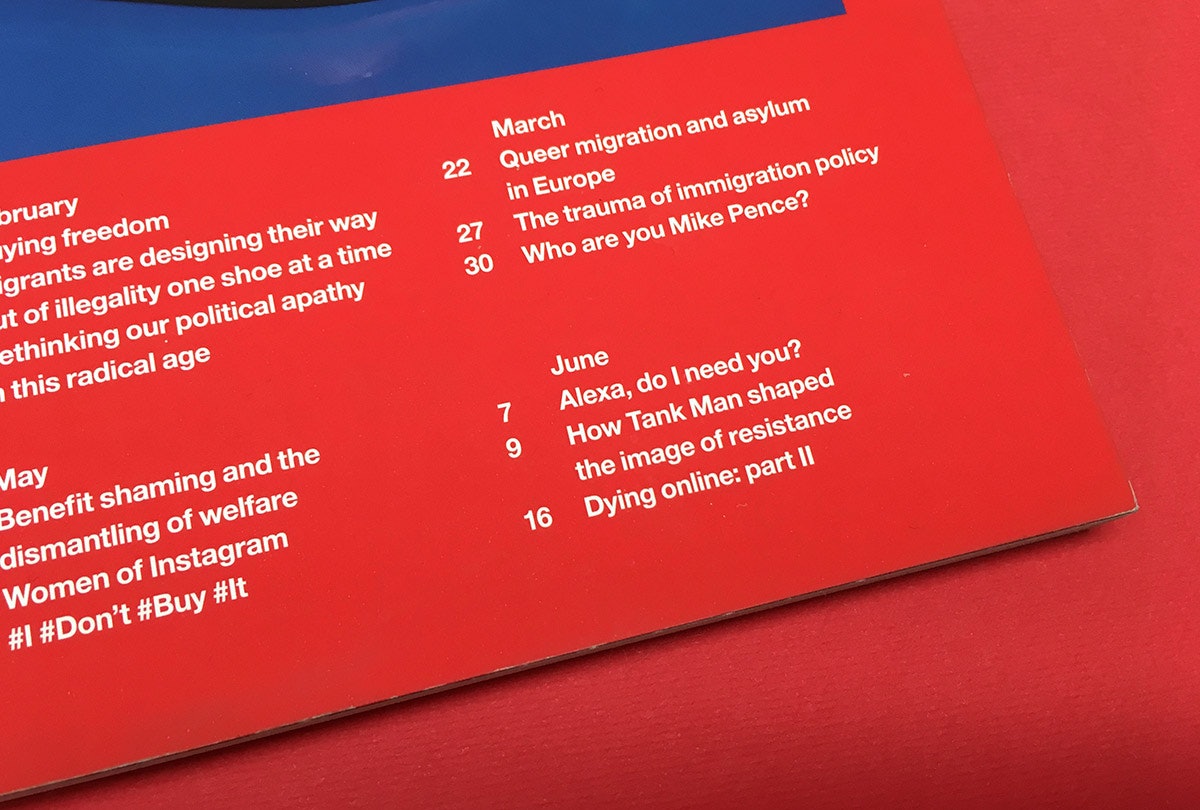 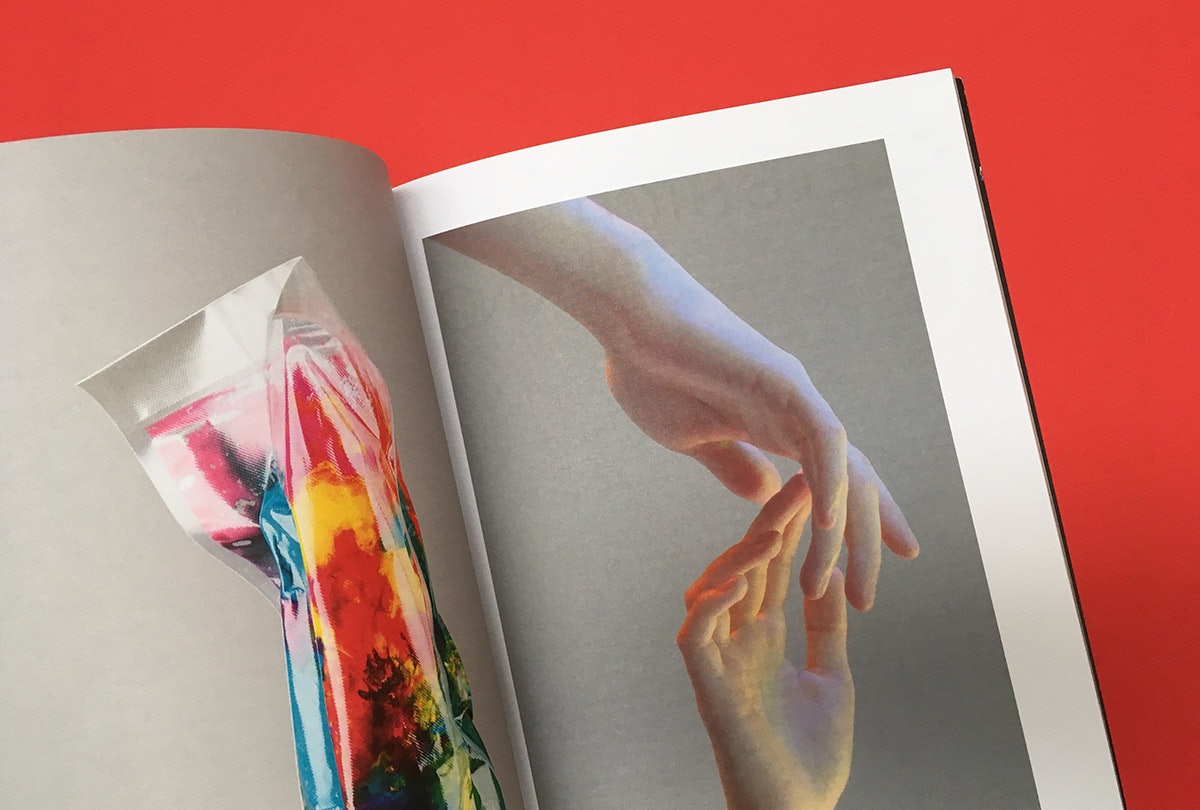 Tell us about the decision to format the magazine by date.
Because the printed issue is made up of content from our website (bar the ‘Sext’ article, which was commissioned for the printed issue only) we wanted to anchor the content in a date as to not lose the relevancy of the time in which it was written. As we comment on current affairs, it’s important that our readers get a sense of why January was all about protest or December about #MeToo. A printed magazine, especially a yearly one, can become somewhat timeless and we didn’t want to lose the importance of when these issues were discussed and why. So maybe – hopefully – in three years time, if this issue is picked up, the reader can connect Trump’s inauguration to the content of protest in January 2017. 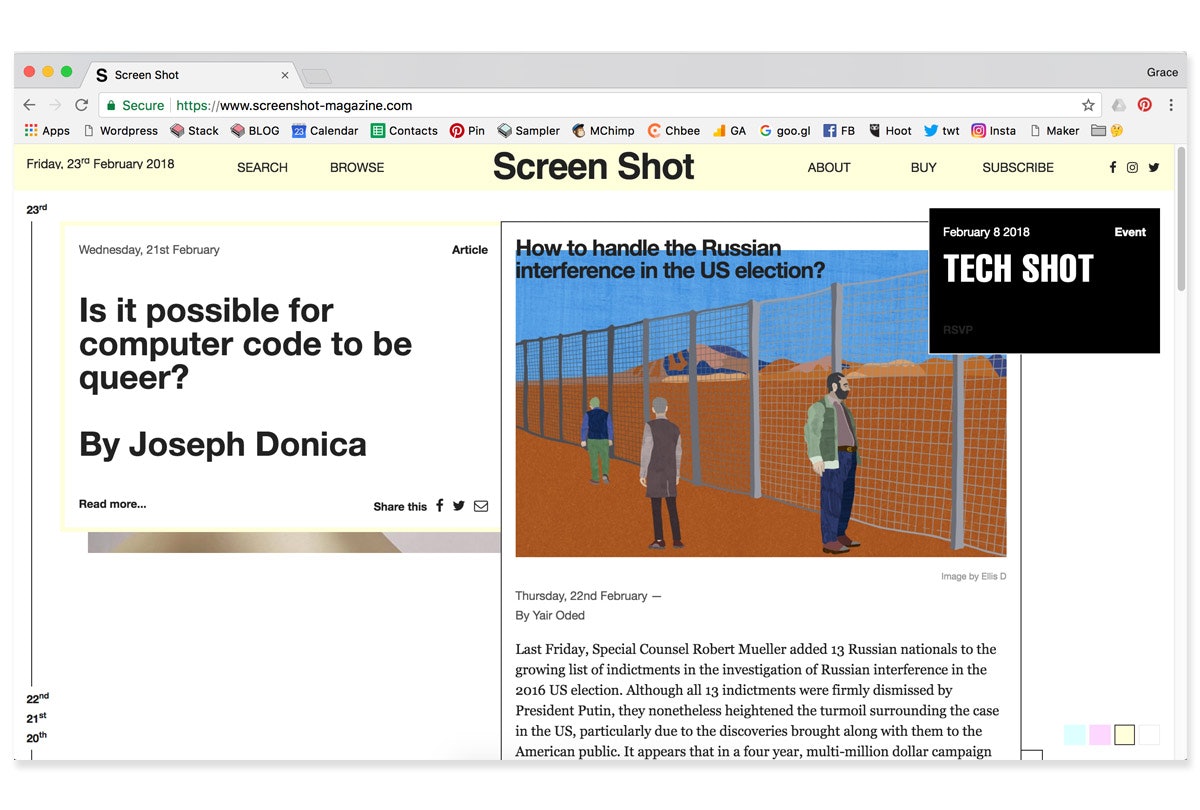 There were so many eye-opening articles, but I especially loved learning about Top Manta, the story of migrants designing shoes as a path out of illegality. What were some stories you were especially excited to share in this issue?
Top Manta is also one of my favourite stories! It’s the exact kind of story we like to run, something that shines a new light on an old issue and how inspiring it is to look at a group our society tends to look down on, but instead appreciate their bravery, ingenuity, and innovation – against all odds.

I suppose I’m excited to share all of the stories in this issue as they all somehow represent the editorial language we’ve been working hard to shape. It’s very difficult to stand out from the immense amount of interesting content out there, but what we try to do at Screen Shot is to find that unique angle to a story, whether it be the strange mortality behind technological developments, or the breakthrough moments of those who have been stigmatised as one thing for far too long. Our content is about liberation and human rights and the everyday – and how they all intersect and create really really interesting stories. 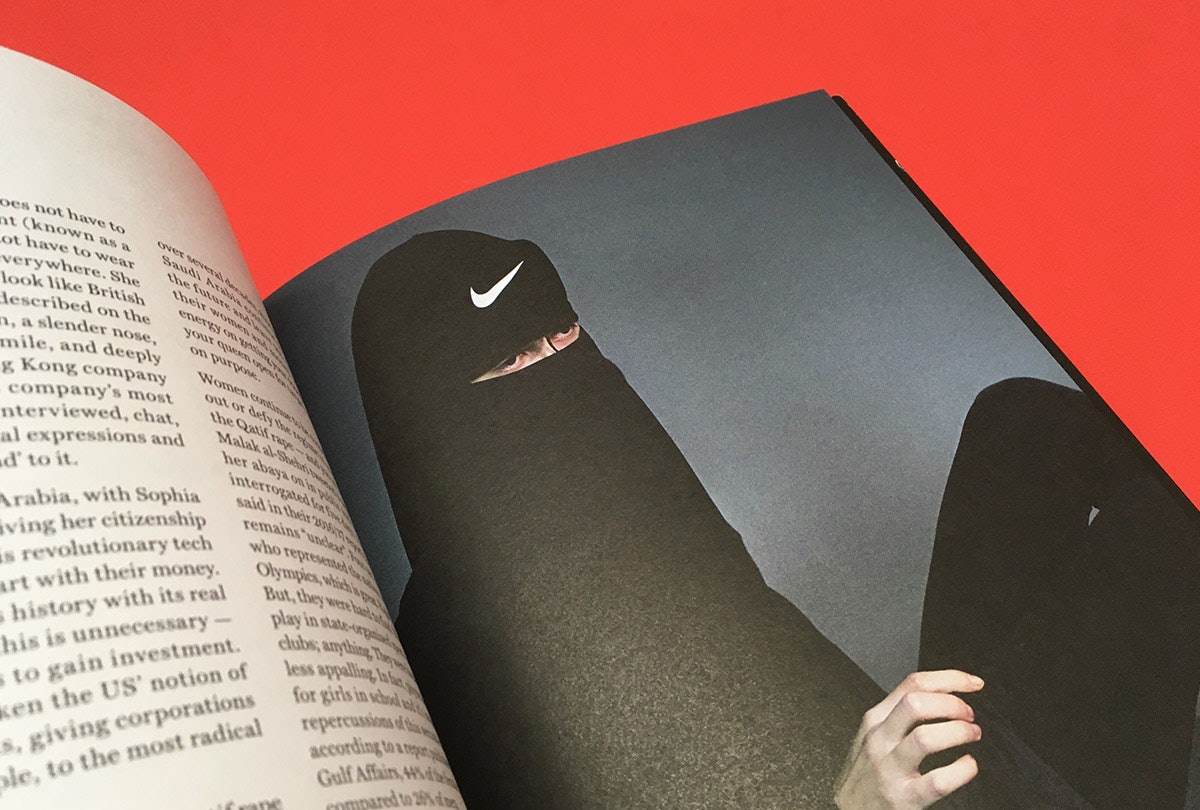 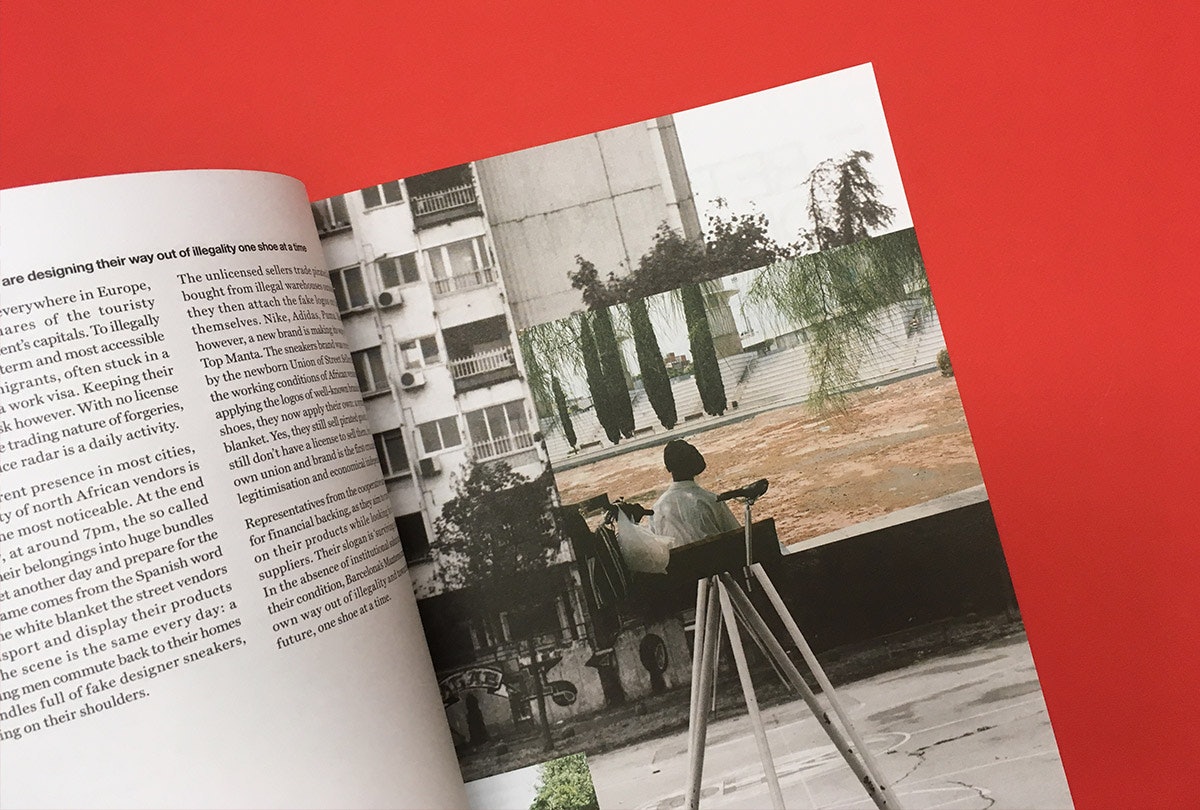 Lastly, now that you’re in issue three, do you have learnings you could share from issue one and two?
So many learnings! We basically grew and found our voice along the way. Looking back at the content of issue one, it’s incredible to see how different the tone of voice is. But if we lingered on creating the perfect product every time, we would never have the guts to make anything. I enjoy seeing the development of our work, even if it’s public and everyone can see how we’ve changed and grown, that’s something that makes me happy. I think learning along the way is the best way to learn – no one can prepare you for the rollercoaster that is running your own project, be it a magazine or anything else. 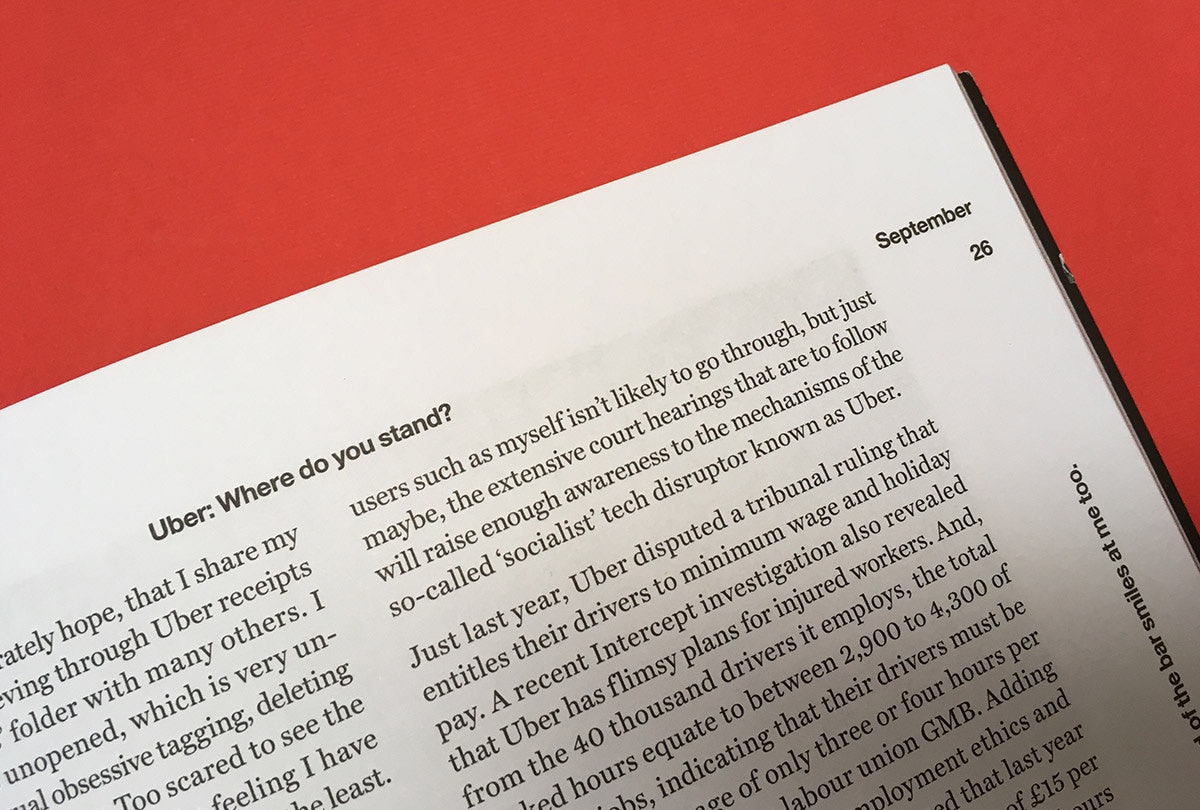 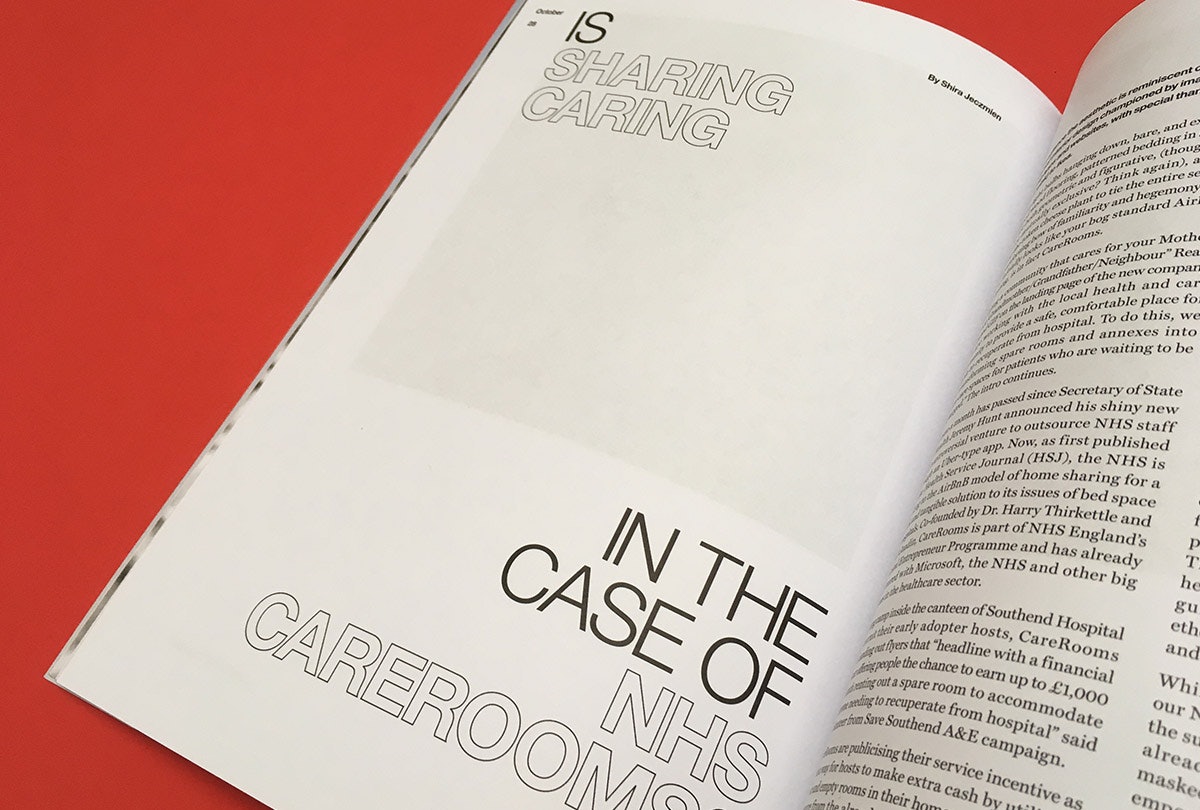 “A garment that squeezes the testicles makes a man think differently” 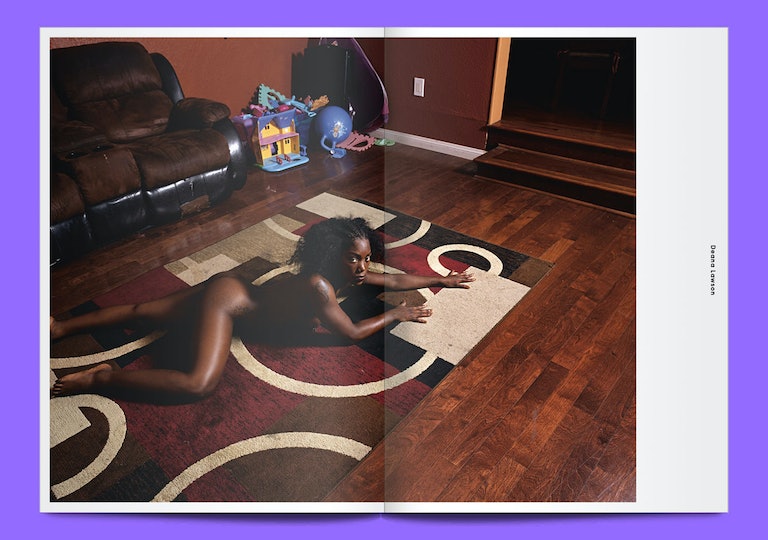 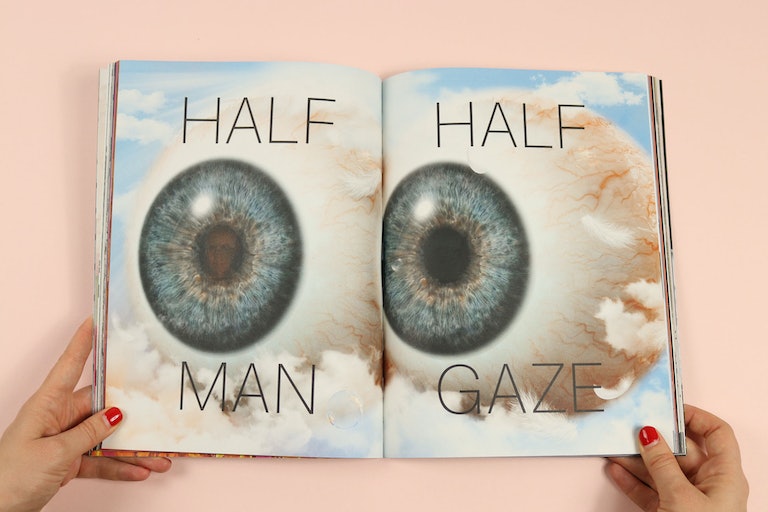 Made in the Balkans, This Is Badland #3 examines the cult of the self 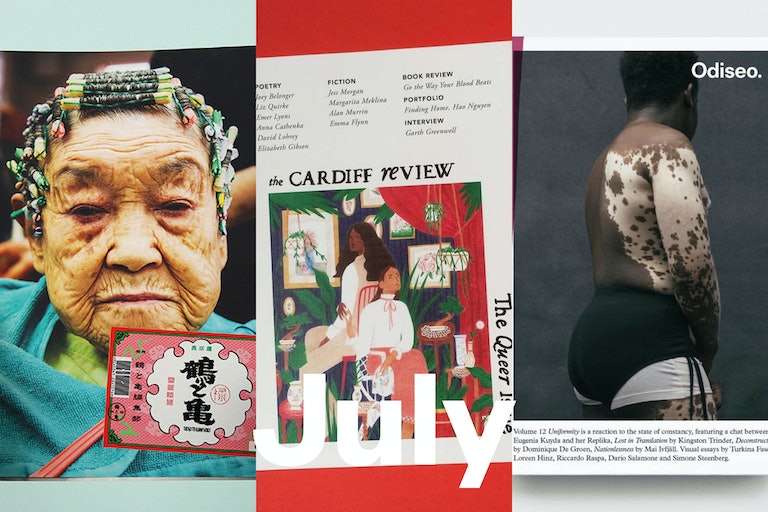 Vote for your favourite magazine cover from July and you could win a free Stack subscription! 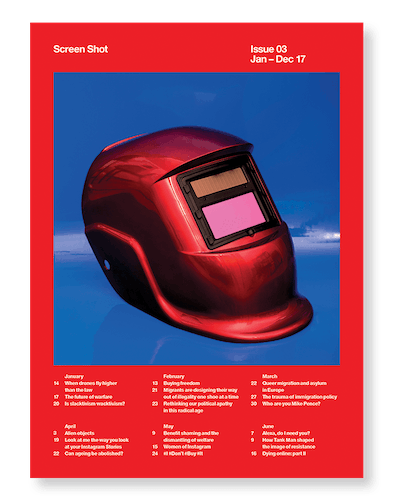