Behind the scenes: Nang magazine

Published out of Seoul, Nang is a new 10-issue magazine covering cinema in Asia. Beautifully designed and produced, each issue features a new guest editor and combines specialist commentary with high-quality imagery to open readers’ minds to Asian cinema culture.

Having just received the pilot issue, I caught up with Italian-born publisher and editor-in-chief Davide Cazzaro to learn more about his fledgling magazine. 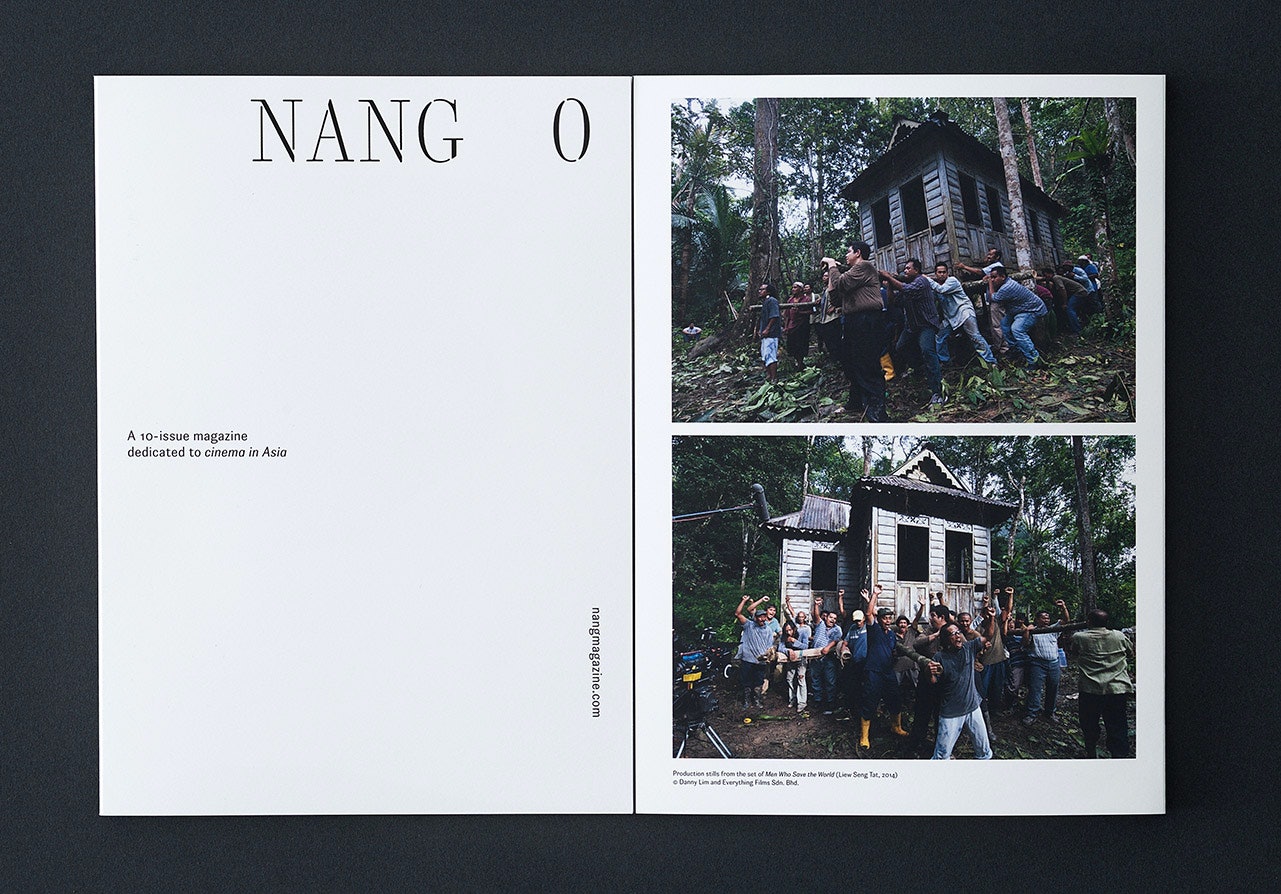 The pilot issue of Nang does a great job of mapping out the motivations and ideas behind the concept. What’s your background?
This is my first time publishing a magazine, but it’s something I’ve thought about for a long time. My background is from film criticism and cinema studies, as well as working with film festivals. I got more and more fascinated by independent magazine publishing, so I thought I’d give it a try. Especially because there isn’t a print magazine out there dedicated to Asian cinema with consistent focus and specialist commentary, and exceptional print quality.

One of the things I find most frustrating with mainstream film magazines is the poor quality of images. It’s ironic! The effort that directors and cinematographers put into creating an image for the screen doesn’t come through when it’s reproduced poorly on the printed page, so with Nang we want to go in a different direction. 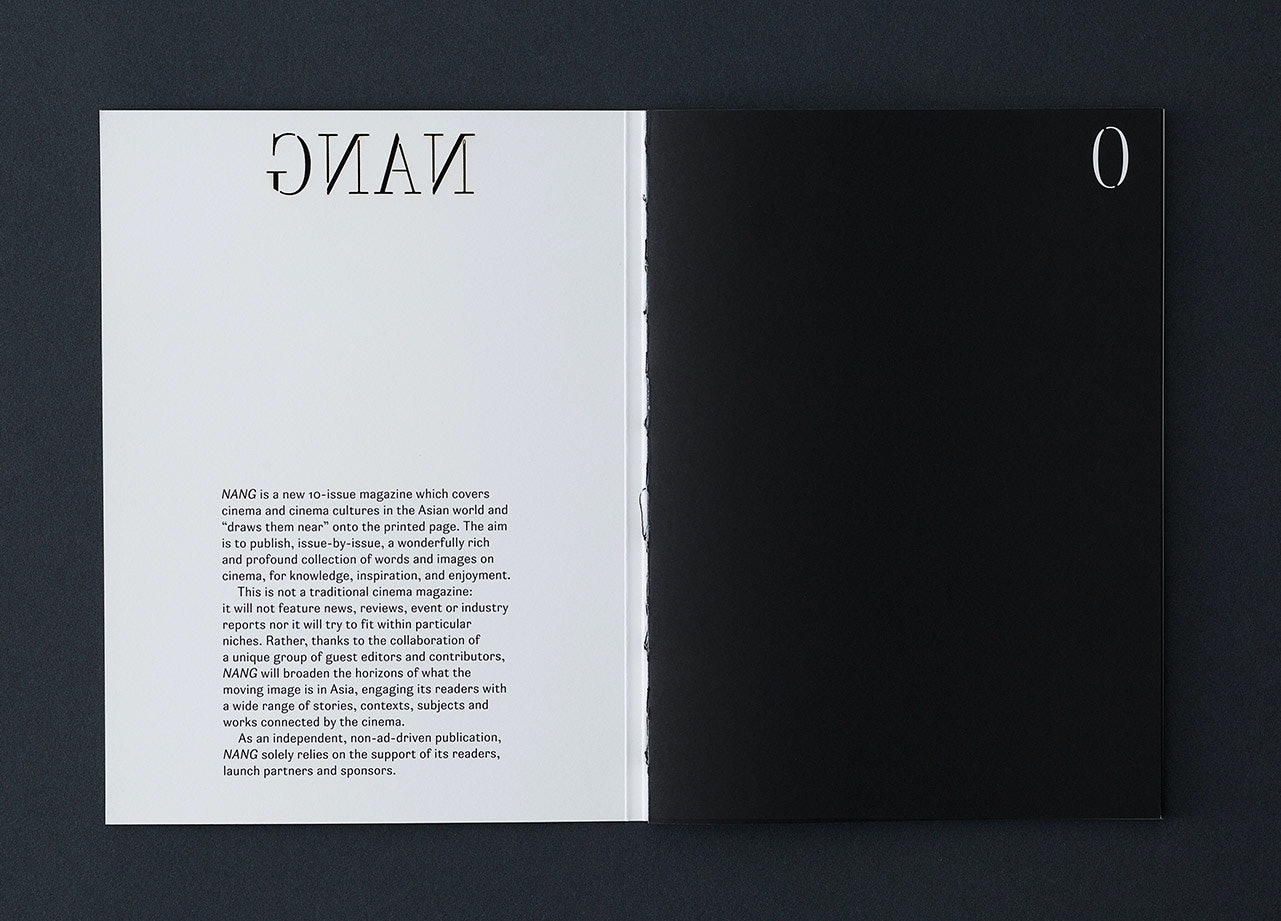 And that’s about choosing the right printer and paper to print on?
Personally, I always start projects from the materials and the form, and from there I’ll develop it further. I was fortunate to find two partners in Sweden that I respect a lot; one produces the paper, and the other is an amazing printer. We’re really enthusiastic about each other’s projects, so it’s an ideal partnership. 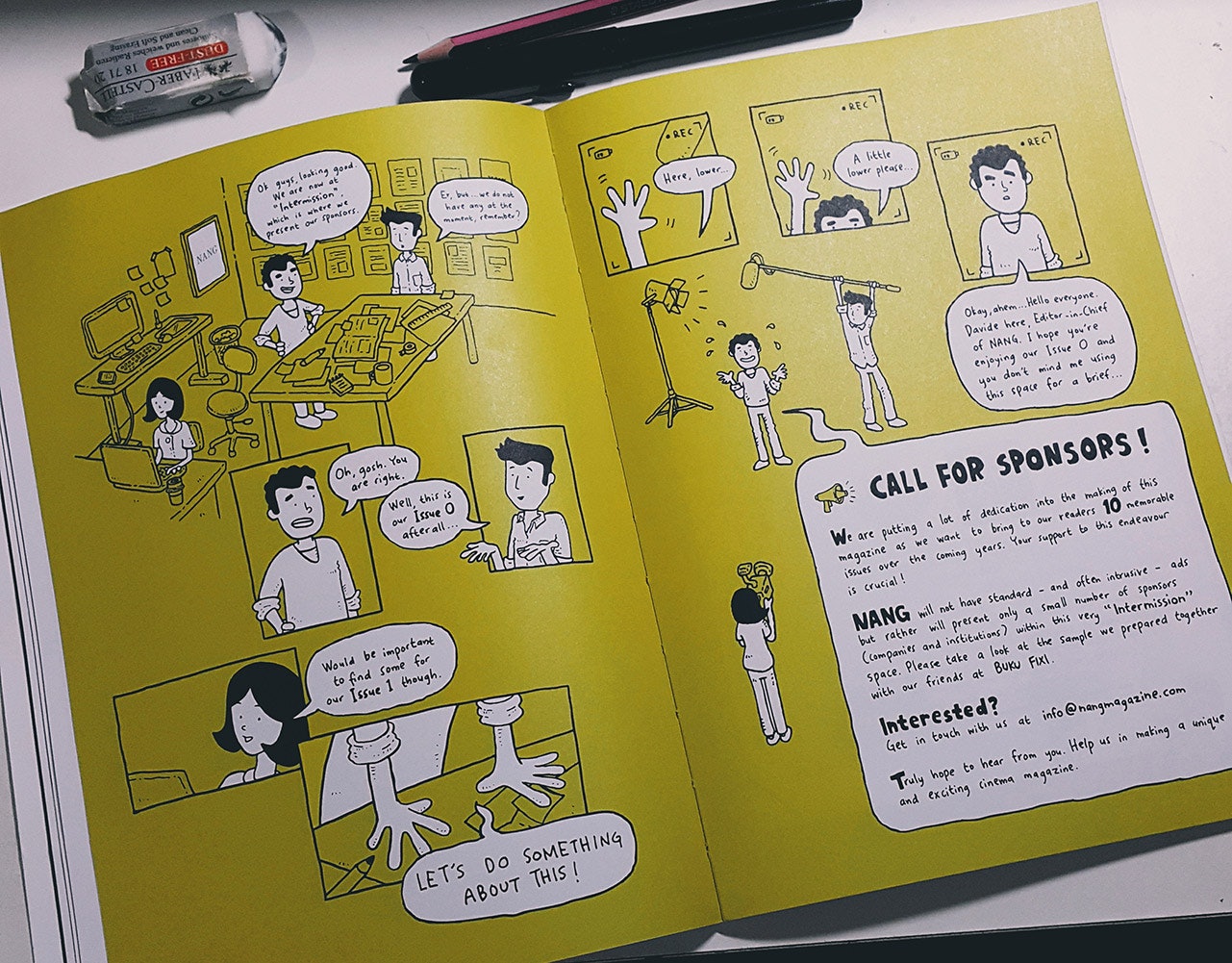 Apart from introducing the concept, this issue includes a call for sponsors that’s really original and refreshing. How did you come up with the cartoon approach?
I wouldn’t be fully joking if I said it was out of desperation. I wasn’t sure whether I’d approach sponsors for issue zero or not – I was trying informally, but of course, without anything to show, it was a challenge. So we decided to use the intermission as a call for sponsors and to play with the fact that there are no sponsors involved in this issue. The illustrator Mimi Mashud and I came up with the idea to create a cartoon, which is also a play on the legacy of animation in cinema and commercials. 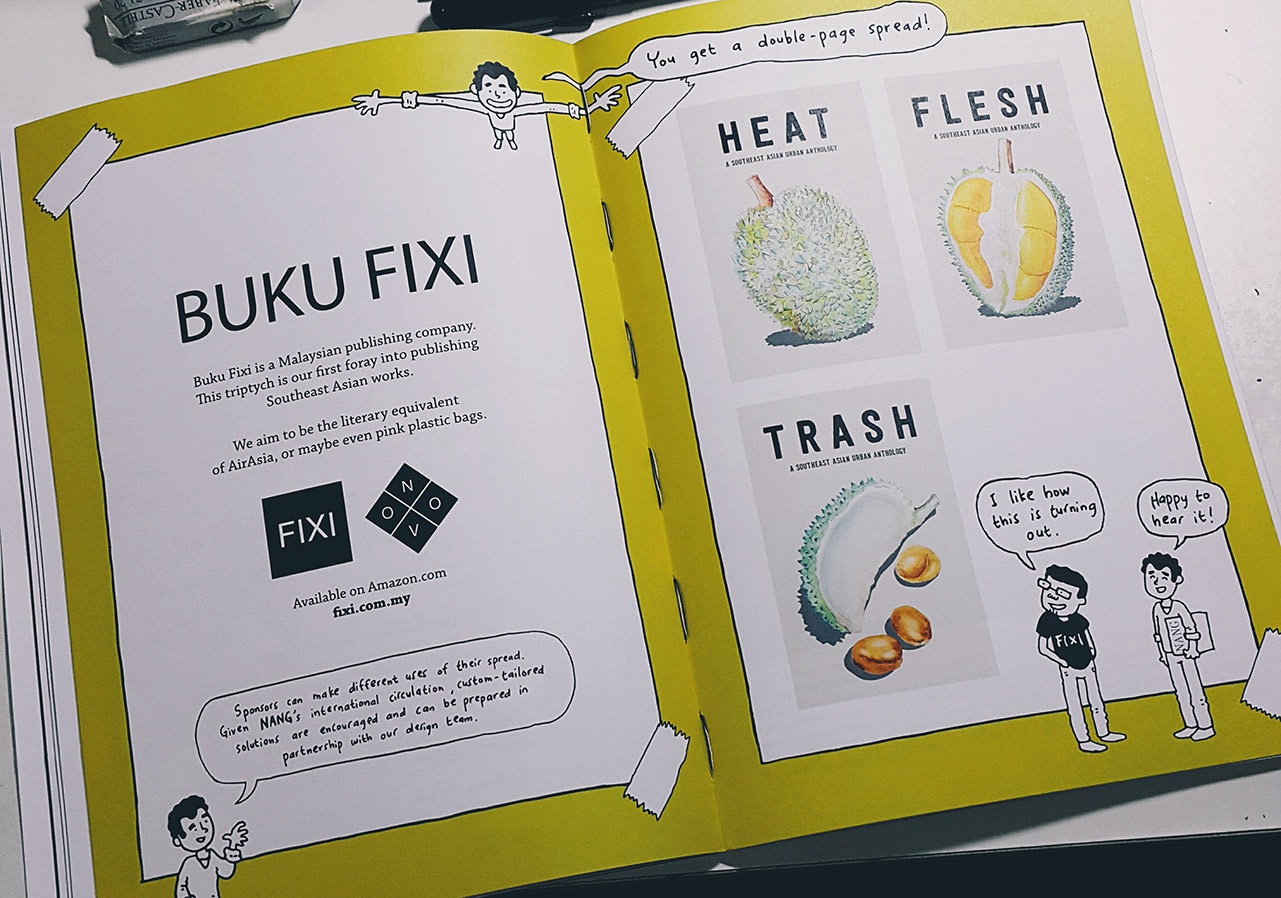 What has the response been like so far?
I’m currently in talks with a few sponsors. Of course with any new magazine that will always be a challenge, and this is a magazine that some would say is a bit difficult to position – it’s a cinema magazine, but at the same time it’s devoid of many of the typical elements that characterises the sector. 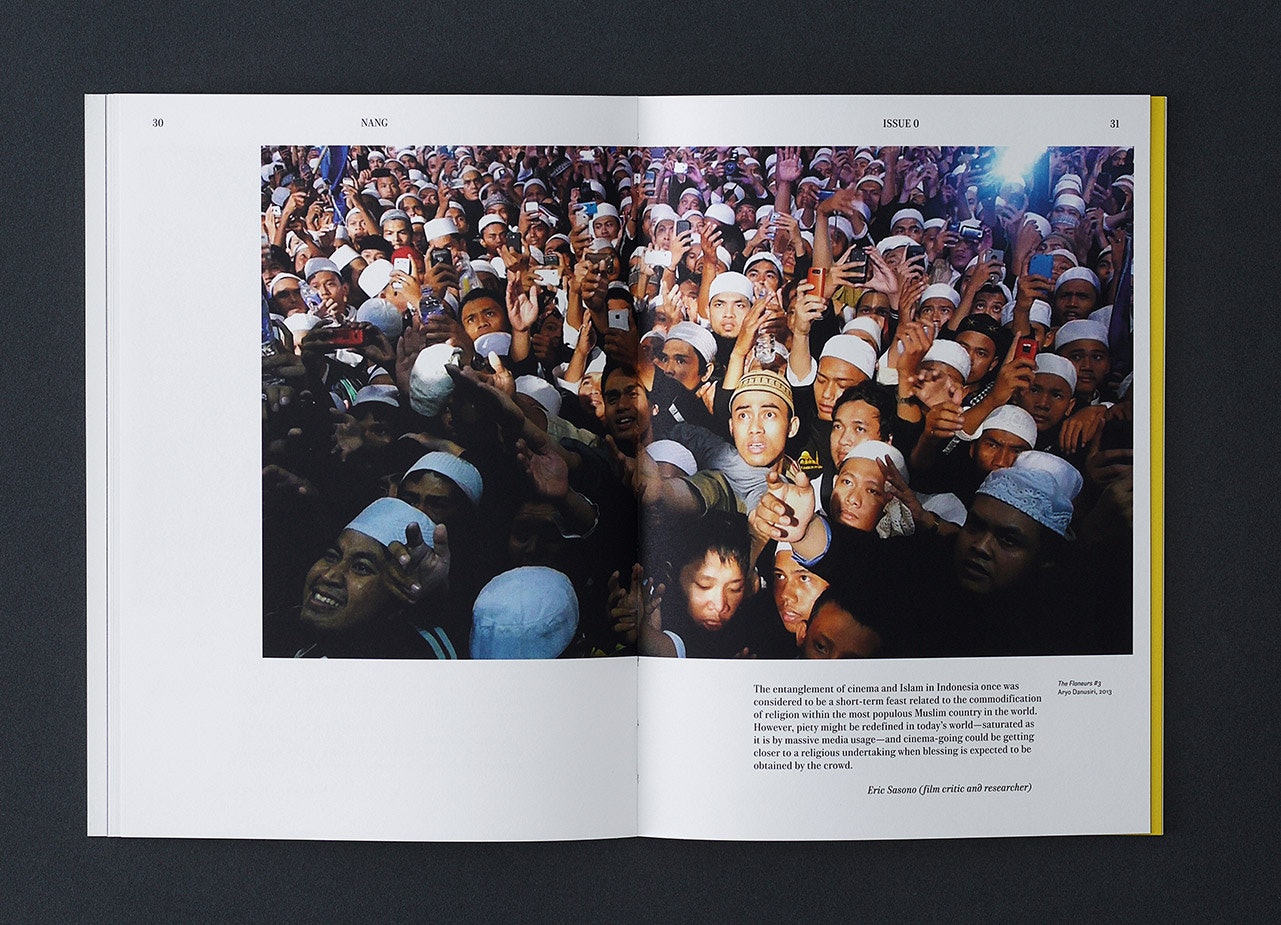 What is it about Asian cinema that makes you want to dedicate a whole magazine to it?
The sheer diversity! Asian cinema is really vital and varied, and it’s a pity that it gets so little exposure in the non-Asian world. Nang is all about opening up the perception of Asian cinema, and amplifying the efforts, voices, stories and contexts that are less well known both within and outside of Asia. 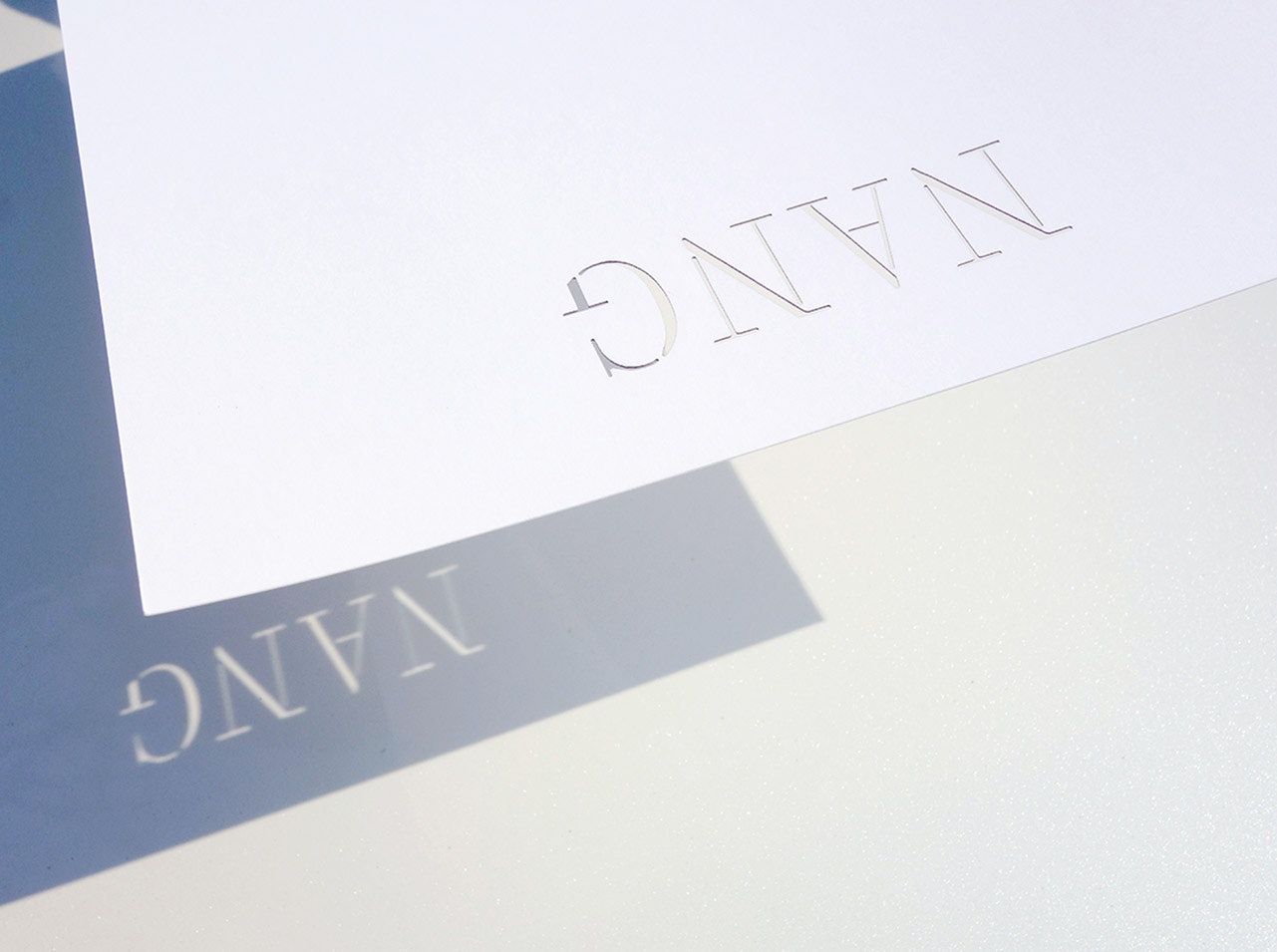 I love how the design throughout the magazine reflects cinema – like the die cut masthead referencing shadow theatre. What has the design process been like?
That was a master-thought by the designers, Shin Haeok and Shin Donghyeok. The term nang derives from a form of shadow play using carefully carved traditional puppets. So the masthead is a play on light and shadow, craftsmanship and the dynamics between what’s in front of the screen and what’s behind. The design will  will change in future issues, but the whiteness of the cover will probably remain. 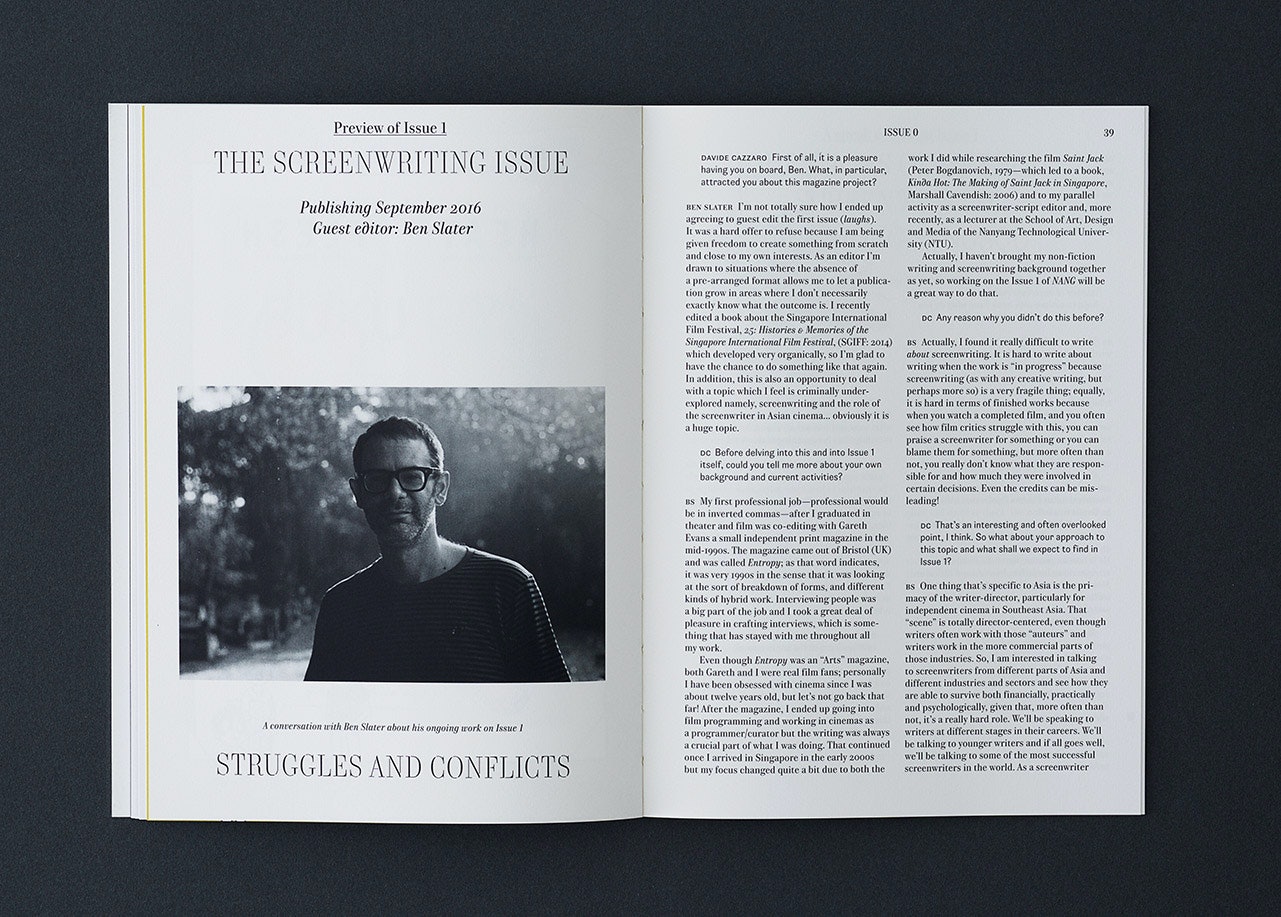 I’m excited to see how it plays out. Can you talk me through your plans for the upcoming issues?
In the back of this issue we announce the first three issues and their guest editors. The first issue is about screen writing and will be mostly interview-based; issue two is about passion and over-doing things, and will be completely different from the first; and the third issue will be a sort of literary issue with a collection of short stories. I hope readers will be fascinated by the profound changes, and will not know what to expect from issue to issue.

Photographs of Nang by Park Sungsoo 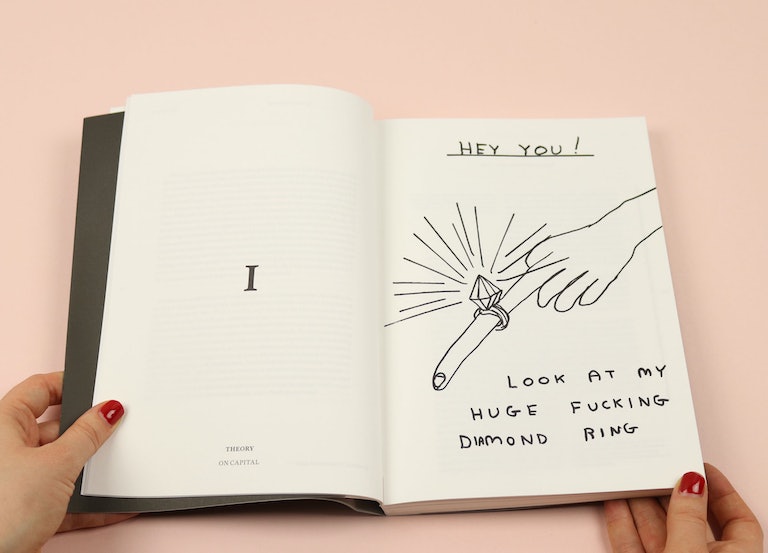 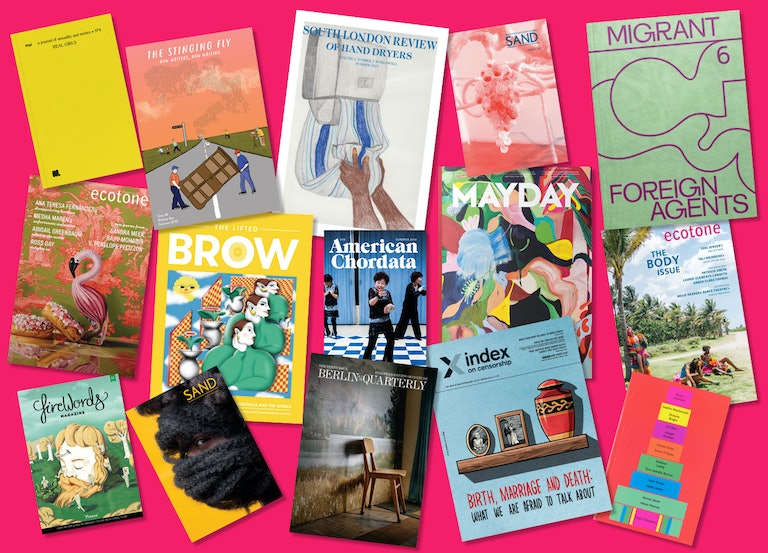 The best stories of the year