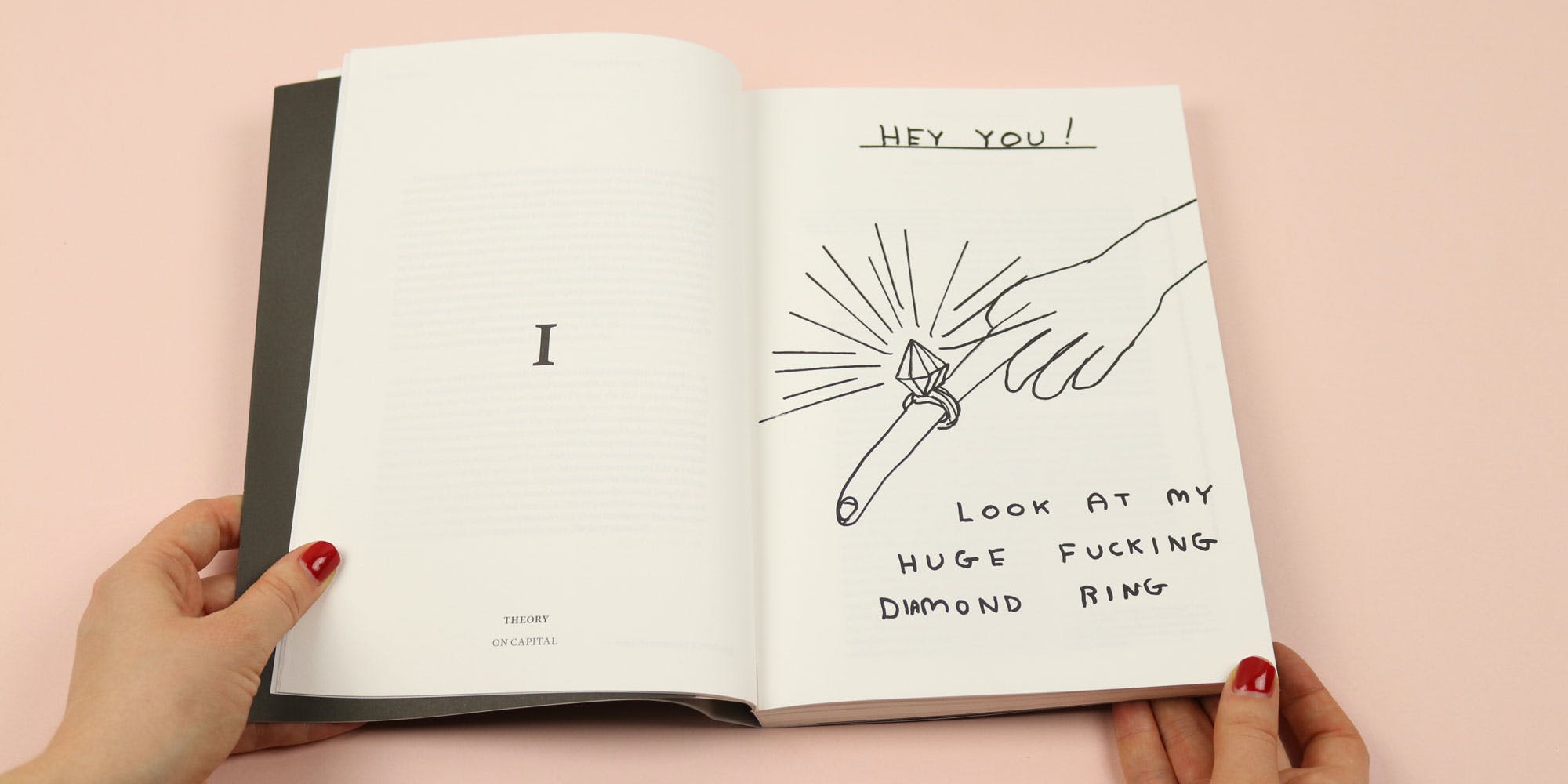 Vestoj is not a fashion magazine. It’s an “annual journal of sartorial matters”. Thick and academic, there’s an entire section of the magazine devoted to theory, most of the contributors are leading academics, and essays are prefaced by quotes from French intellectuals like Bataille (“The sexual act in time is what the tiger is in space”). Over the decade that Vestoj has been publishing, however, there’s been a subtle shift away from theory and towards a more personal approach to clothes. Editor Anja Aronowsky Cronberg, a senior researcher at the London College of Fashion, explains that shift with characteristic honesty: “When I started Vestoj, I couldn’t help but want to impress people all the time. Theory became my way of justifying why I was so drawn to the beauty and the glitz of the fashion world. Now I’m more confident.”

That’s not to say that this issue, themed ‘On Capital’, is any less challenging. Vestoj essays have a particular gift for taking something ostensibly light — the perfection of Joan Crawford’s mouth, say — to make a deeper argument; in the case of the Crawford piece, that’s about beauty as currency (“If you want to see the girl next door, [Crawford] quipped over and over, go next door”).

But there’s a level of exposure to this issue that feels new. Anja begins, movingly, by tracing her life in clothes, ending with what she was wearing the first time she felt her baby kick. This issue is also funny. One of my favourite spreads is a David Shrigley line drawing of a hand wearing an engagement ring, captioned: “LOOK AT MY HUGE FUCKING DIAMOND RING”.

Anja spoke to me on the phone from her kitchen in Paris, about the Kardashians, taste, and the importance of getting emotional. 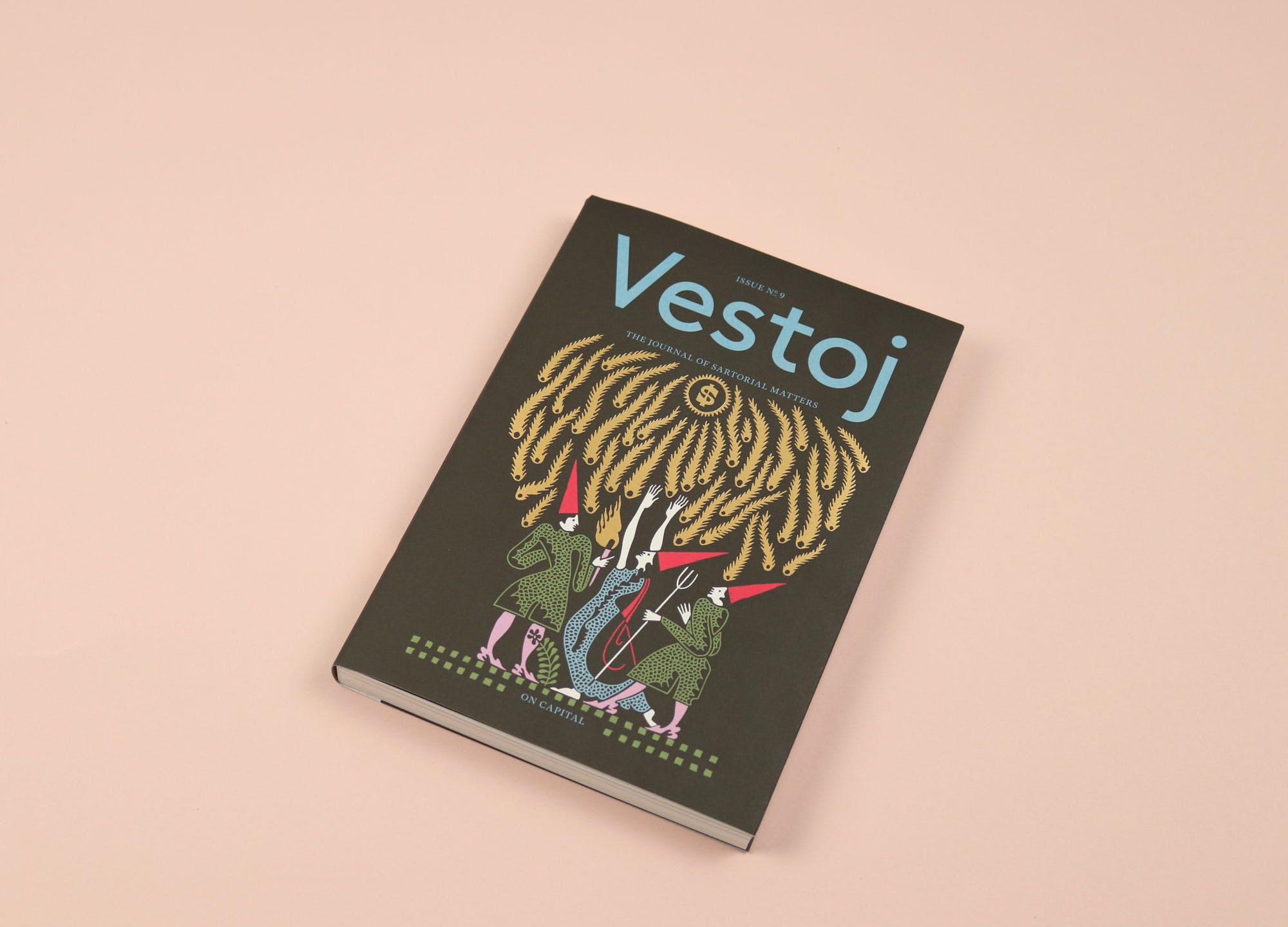 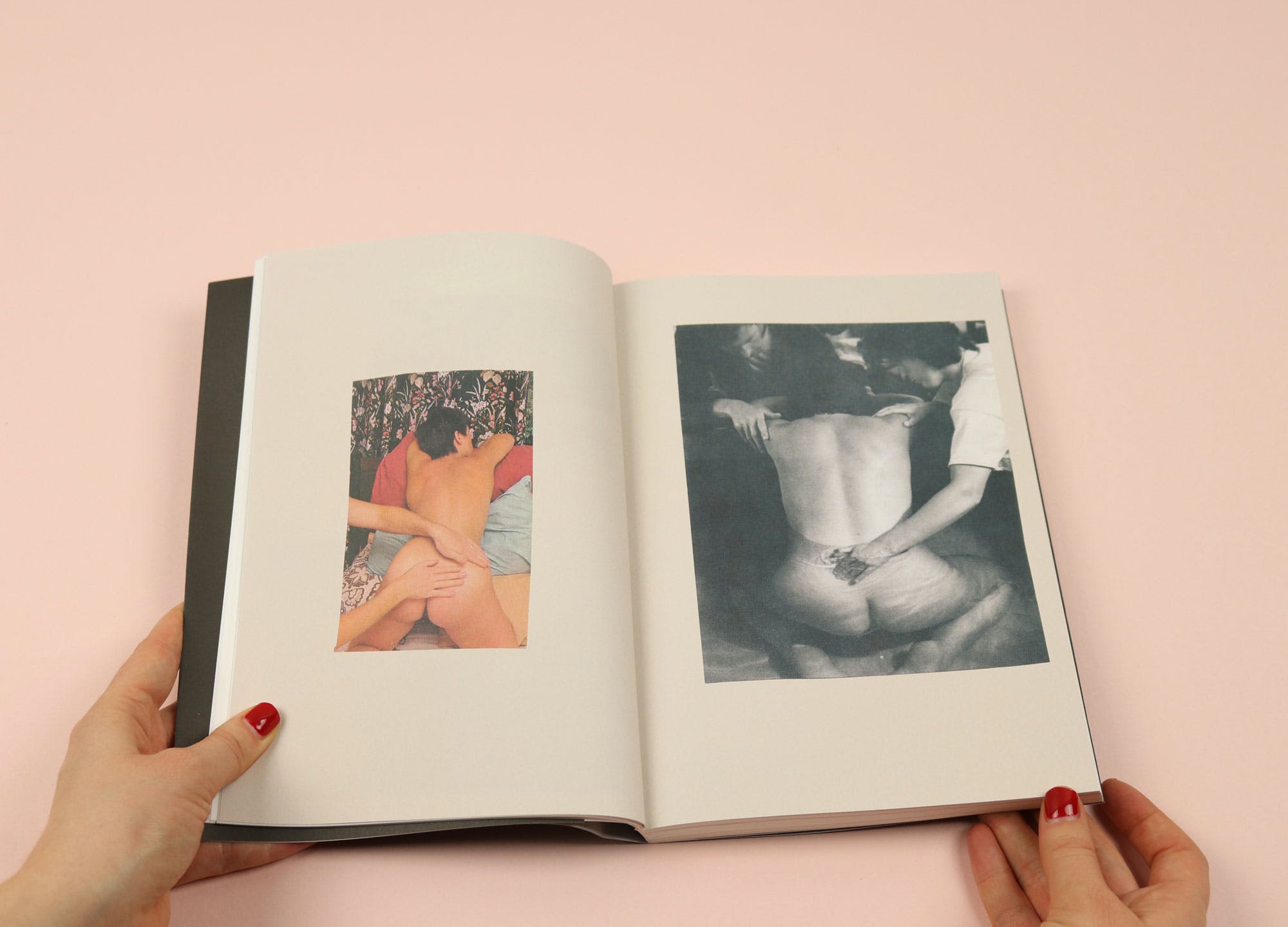 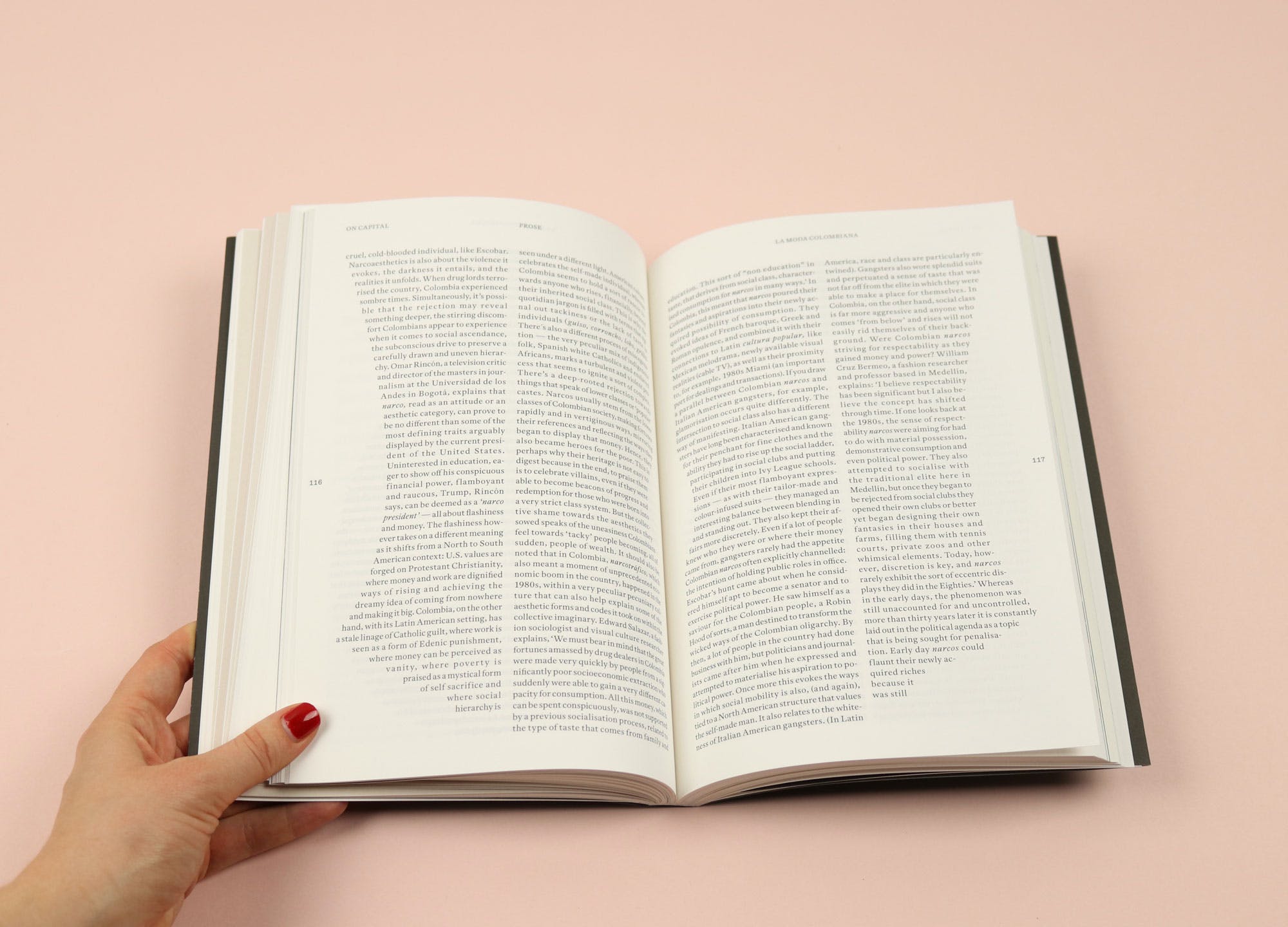 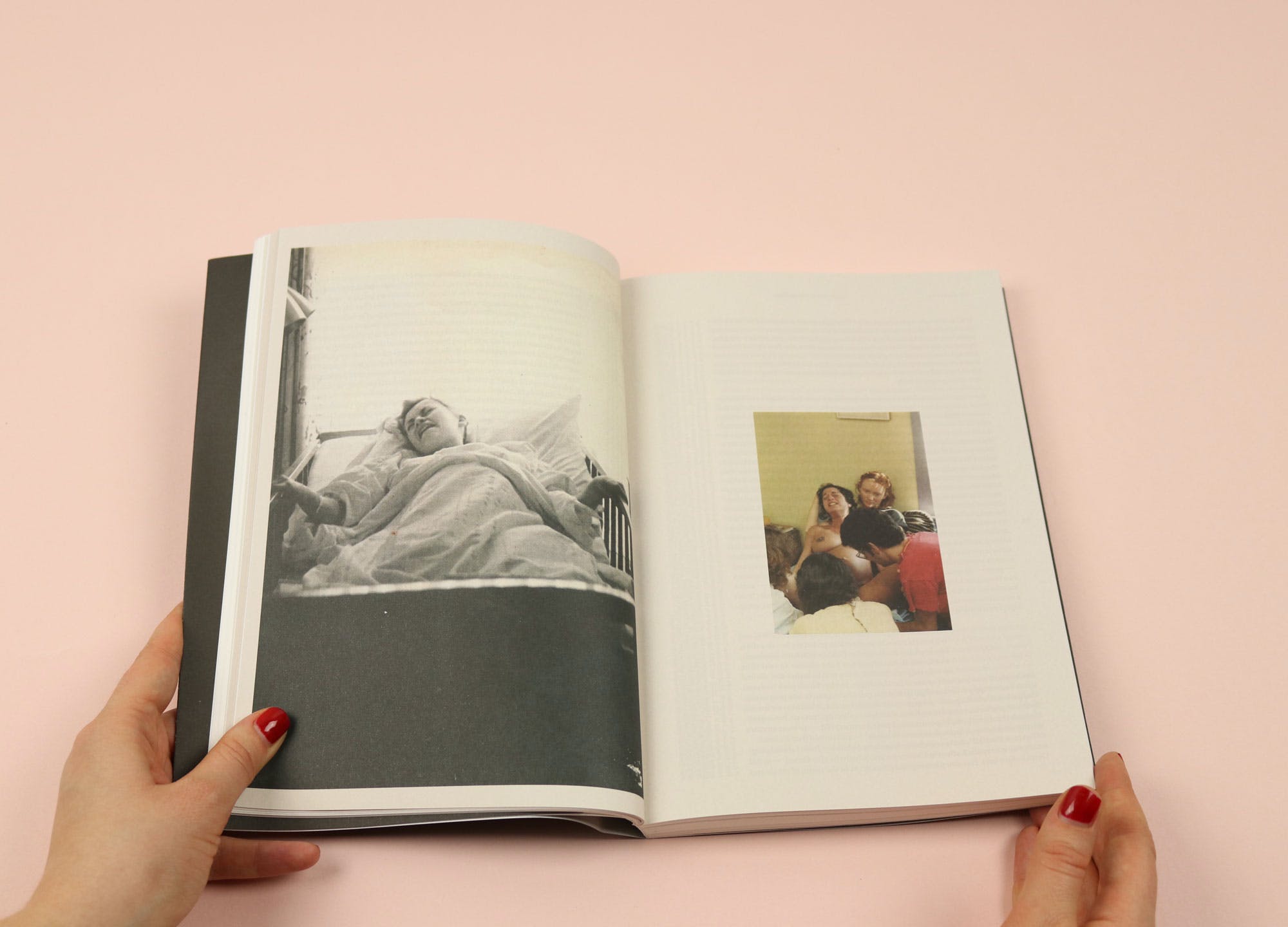 Capital is a fascinating subject to theme an issue around. Which article most surprised you in its approach to the theme?

The balance I try to strike with Vestoj — it’s not always easy, and I worry sometimes that I don’t succeed — is between seriousness and playfulness. You can theorise all you like, but sometimes it’s just important to remember in the simplest way why clothes are important and what they can signify. Christina Moon’s piece, ‘The Maintenance and Preservation of Life’ resonated with me a lot this time because it’s emotional. Christina is Korean American, a first generation immigrant, and in this piece she looks at labour in the context of her own family, specifically the labour of mothers and daughters. She’s writing about the experience of moving house, and there’s a passage I find so beautiful where she talks about packing up her children’s clothing and deciding what to keep and what to throw away. Emotional value is a form of capital that I didn’t think much about when I started making the issue because I was focusing on ‘grander’ forms of capital: financial, social, cultural. Christina reminded me, in this very beautiful, straight-forward way, of the many small ways that capital affects what we consider worth keeping, and what’s worth throwing away.

The magazine starts off on a very personal note, charting your life through the clothes you were wearing, from a Prince concert at 12, to pregnancy at 40. Was that an important choice for you, to begin this issue personally?

I’ve noticed that I’m pulled more and more towards the small things in life — and small lives — and away from abstract theories. I’m sitting right now at my kitchen table in Paris, which is also my desk, looking out the window seeing all these people trying to protect themselves from the rain. Some people are trying to pull their hoods up and struggle against getting wet, and others have just given up and are getting soaked. Clothes are that: what we put on everyday, how we face ourselves and others, and what protects us from the rain and the wind while also allowing us to feel like ourselves — whoever that might be.

Has anything changed in your life to make you more interested in the personal?

A lot of it has to do with feeling more confident in my work and my voice. When I started Vestoj 10 years ago, I couldn’t help but want to impress people all the time. I felt embarrassed on some level that I was so drawn to the fashion world, and I didn’t always find it easy to reconcile the side of myself that was enamoured with beautiful things with the side of myself that wanted to think Big Thoughts about Big Topics. Diving into theory was a way of justifying myself: I realised that talking about philosophy can be a little intimidating and being a little intimidating in the fashion world can give you the upper hand sometimes. And when I was around people who didn’t care for fashion — who I also somehow wanted to impress — theory was a way of saying “fashion is valuable.” These days I feel less of a need to battle. I’m doing this work very much for myself, because I love it and because I learn from it, and whether or not it touches or affects others often feels too abstract to focus very much on.

When I started Vestoj 10 years ago, I couldn’t help but want to impress people all the time.

There is still a dedicated ‘Theory’ section to the magazine, but the pieces are exceptional for focusing on something apparently unexceptional, like the tendency among women of a certain social status to wear leggings.

Athleisure is interesting because if you look at fashion history there’s a clear trajectory: clothes get more and more comfortable. Partly that’s
to do with the fact that we’ve internalised elements like the corset; Valerie Steele has written eloquently about the ways that women have simply replaced the boned corset with diet, exercise, and plastic surgery. So while women and men’s clothing is increasingly interchangeable — jeans, trainers, baggy tops and hoodies — you could argue that wearing those kinds of clothes, for a certain type of glamorous woman is the equivalent to Mark Zuckerberg wearing a hoodie to a board meeting. He’s instantly recognisable; he doesn’t need to adopt a conventional ‘power suit.’ We’re so used to seeing the Kardashians’ asses, breasts and waists so you can speculate that to cover them up is the ultimate power move, a way of saying: I know that you know how hot I look under this tracksuit; I don’t need to prove it to you.

We're so used to seeing the Kardashians' asses, breasts and waists so you can speculate that to cover them up is the ultimate power move.

Another piece I loved centred around pocketless jeans, with the Colombian writer Vanessa Rosales writing about the shame around a certain style of dress — long hair, figure hugging denim and cropped tops — is based in its association with the drug trade. ‘Narco’, can refer to “a car, a woman, a building, a policy, and an attitude”: the word “channels a country’s conflicts and identity struggles”. Can you tell me a bit about the process of commissioning that piece?

I remember reading Malcolm Gladwell’s New Yorker article The Crooked Ladder a long time ago and it made a big impression on me. Vanessa and I talked a lot about it, and about the ways in which the Italian American Mafia were able to climb the social ladder in the early 20th century, whereas contemporary African American criminals have found it more difficult. Vanessa proposed that something similar is at play in certain Latin American countries with nouveau riche narcotraficantes.

Is that to do with clothes? The article mentions the way Italian American gangsters would wear tailor-made suits, which even at their most colourful were nowhere near as flashy as the dress favoured by Colombian gangsters in the eighties.

Well fashion has changed, as it always does. But what we think of as “flashy” or “classy” also goes back to the notion of taste. The sociologist Pierre Bourdieu, who is important to any exploration of capital, writes in his book Distinction about taste being a construct. We mistakenly think that having good taste is something innate. Taste is such a powerful way of keeping classes separate and preventing working classes in particular from being elevated. ‘Nouveau riche’ has that embedded in it: the idea that you might have money and the power that comes from it, but you’ll never be like us.

You can see it in the way Asian designers are treated at Western fashion weeks for example: Japanese designers are accepted because in the West we think of them as standing for a lot of elevated ideals, but Chinese designers have a really hard time being taken seriously in Paris, and taste is one of the weapons that is wielded against them. In the fashion world China is seen as a threat — which comes from the wider political anxiety connected to their clout and hugely important manufacturing industry — so we use our notion of good taste to say you’re not good enough: too gaudy and derivative. I’m fascinated by the way taste can of course bring us together in common admiration of something attractive and desirable but how it is so often also used to divide us: a sort of “you can’t sit with us” type scenario. Inequality in our society is so often disguised and therefore legitimised and tolerated. That’s what attracted me to researching and making this issue. How do systems influence our sense of self? 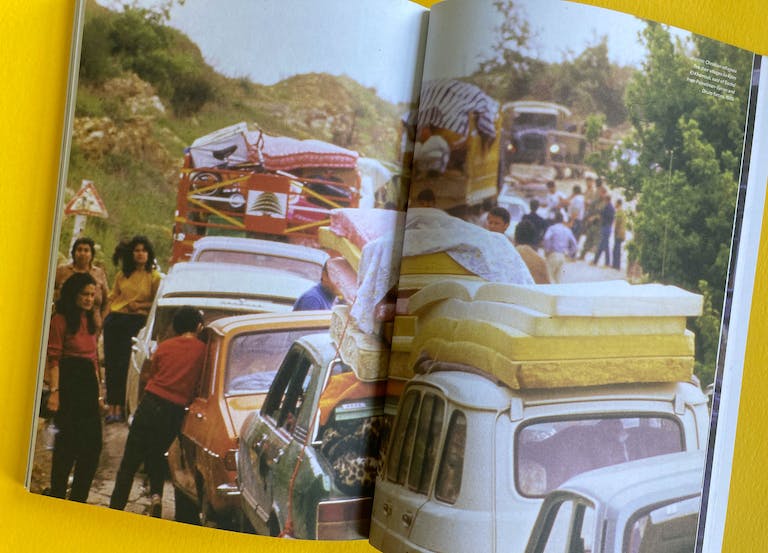 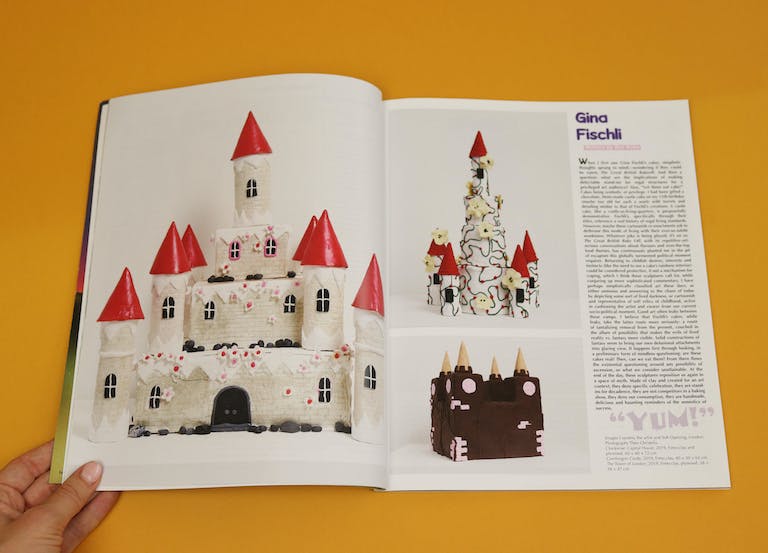