Shortlisted for Best original fiction in the Stack Awards, Firewords Quarterly is a non-profit literary magazine that elegantly mixes work by emerging writers with bold and beautiful art.

Following the launch of their fifth issue, we asked editor-in-chief Dan Burgess and associate editor Jen Scott to talk us through the process of making it all happen. 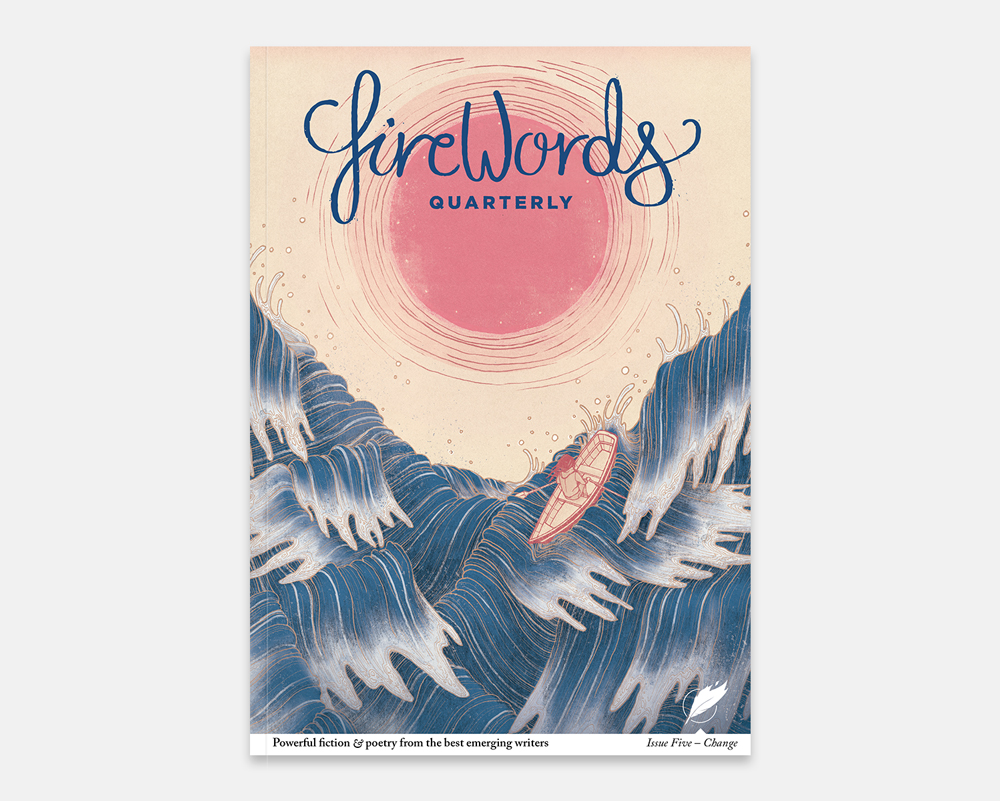 Drank
Dan: A variety of tasty craft beers. We’ve been based in Toronto for this year, so I’ve been trying out lots of great independent local breweries here such as Bellwoods, Junction and Indie Ale House. But to be honest, mostly I’ve been drinking far too much coffee.

Jen: More cups of tea than were good for me! 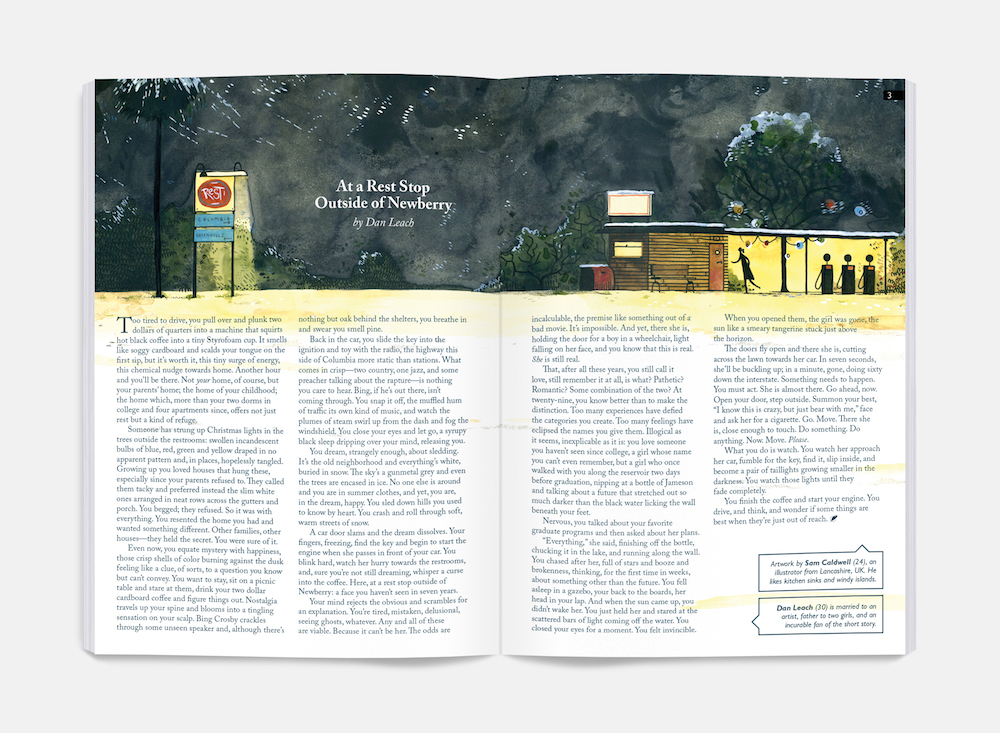 Listened to
Dan: New local music. A friend we met over here introduced us to her band and we loved seeing them play live – it gave us a well earned break! They’re called Patti Cake and describe themselves as ‘a 60’s girl group meets a 90’s grrl group’, which is pretty cool.

Read
Jen: Almost 500 submissions collectively with our small group of readers. Apart from that I like to bury my head in Poirot for some escapism. A classic can always be found when immersing yourself with the wee Belgian.

Sacrificed
Jen: Time was taken away from my own writing schedule, which was tough as I had been overloaded with ideas on the run up to issue five, but as soon as I got into the submission quota from our contributors I was blown away by the creativity of everyone and I did think, ‘Sacrifice? What sacrifice?’ 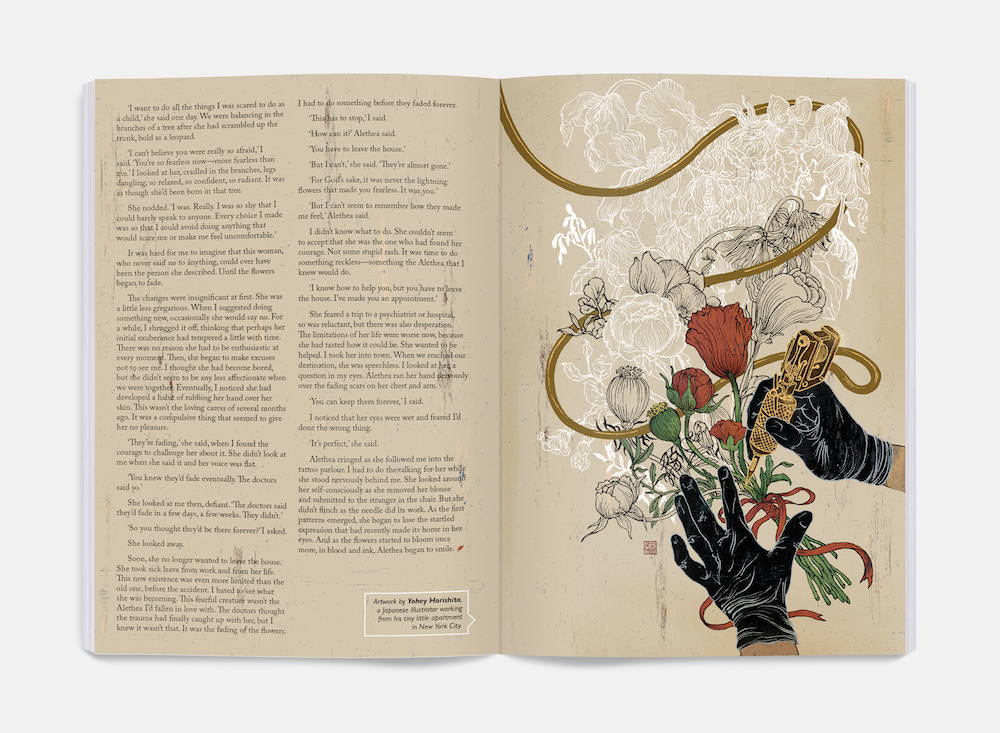 Made sure that
Dan: A certain tradition was (reluctantly) kept going: At least one all-nighter has been needed for every issue of Firewords so far. I’m not sure why the final few days before sending the magazine to print are always so frantic?

Jen: I put more time aside for each task I undertook in the publishing process to ensure that I had longer to prepare things after my accident [Jen was run over by a truck just a few weeks after arriving in the country – read her account for the full story]. Working on Firewords helped me get back to normality after everything that happened so issue five will always be important to me. 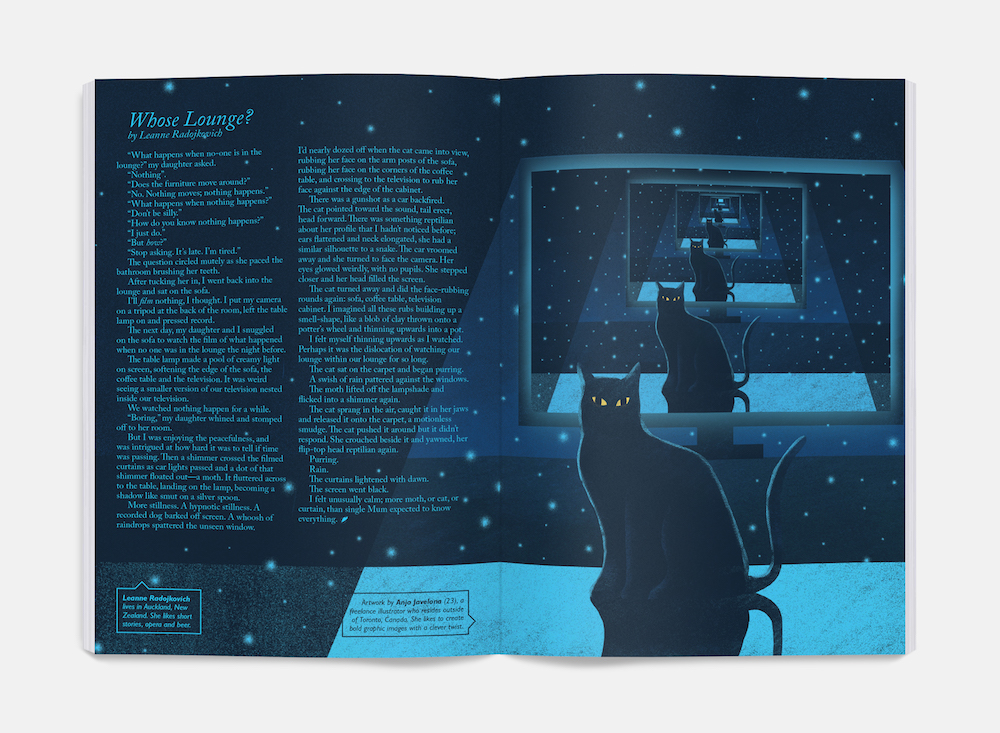 Learned
Dan: How selkies, lichtenberg figures and the droste effect can all feature in one magazine (pages 4, 13 and 38!)

Were surprised by
Dan: The amount of caffeine my body can handle. I often work on the go so local coffee shops tend to be my office. This is great for people-watching and tasty snacks, but very bad for my caffeine level.

Jen: The number of entries for our flash fiction prompt was surprising and delightful. I couldn’t believe that so many people had taken the time to write something specifically for the challenge. It shows a real drive and desire to be part of Firewords. It’s lovely, surprising, and one of the most beneficial parts of the whole process for me.

Were excited about
Dan: The amount of amazing artwork that is featured. This issue has seen us work with the most artists so far and seeing how they visualise each story is always one of the most exciting parts of the process for me.

Jen: The time a pot of coffee replaced my tea obsession was extremely exciting, as were the hours of productivity (and further cups of coffee) that followed. When you work as part of a team, there cannot be a better feeling than finally seeing everything come together a couple of days before the deadline. In fact, I’m an extremely excitable person so I could write an essay in answer to this question! 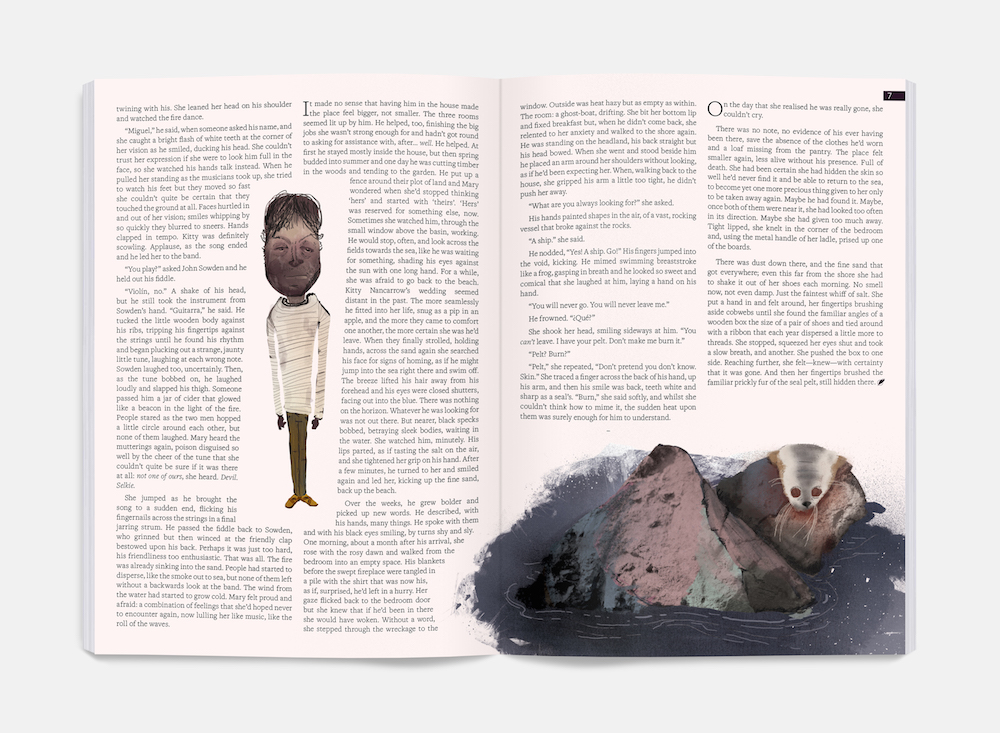 Wish that we had
Dan: More time to enjoy the reading process. Unfortunately, the process of getting through all the submissions often feels against the clock. Subsequently we are giving ourselves more time to read for the next issue to ensure each piece of writing gets the time it deserves to be judged (and enjoyed) fairly.

Jen: A hundred extra pages so we could publish everything of excellent quality that comes in. 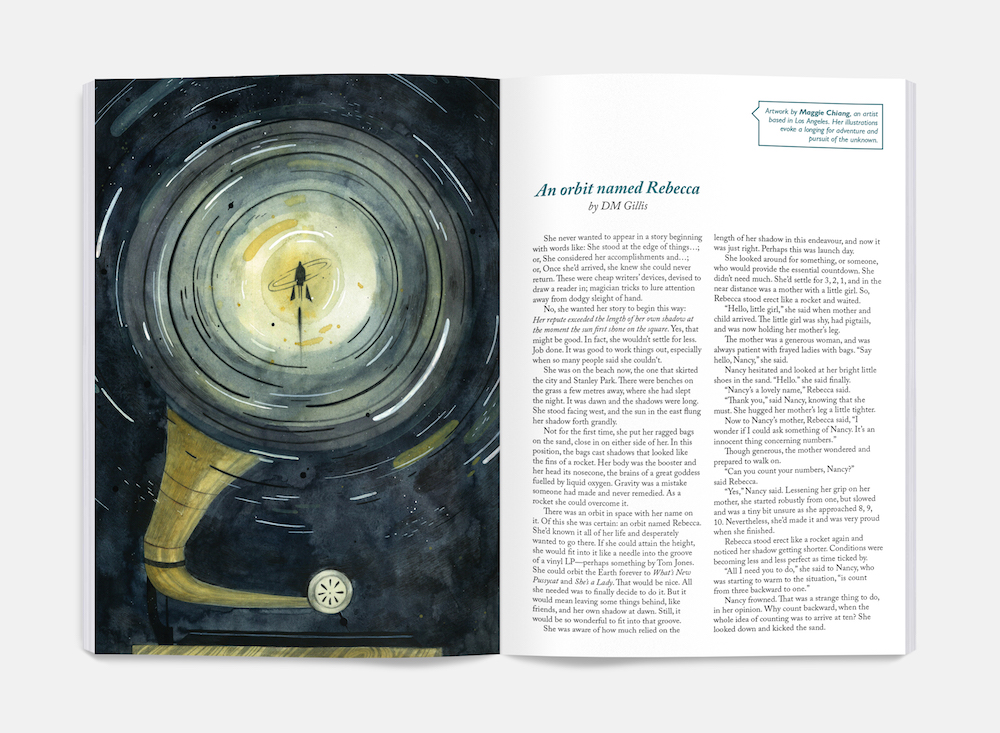 And finally, everyone should buy a copy because
Dan: I’ve seen the hard work and talent our illustrators have put into bringing each piece of writing to life. Also, our writers are lovely and their stories deserve to be read. We like to publish stories that stay with the reader long after they have read the last word so, if that sounds appealing, Firewords should probably be on your bedside table. Get a copy here!

Join the club! Subscribe to Stack and you’ll get a different beautiful, intelligent magazine straight to your door every month 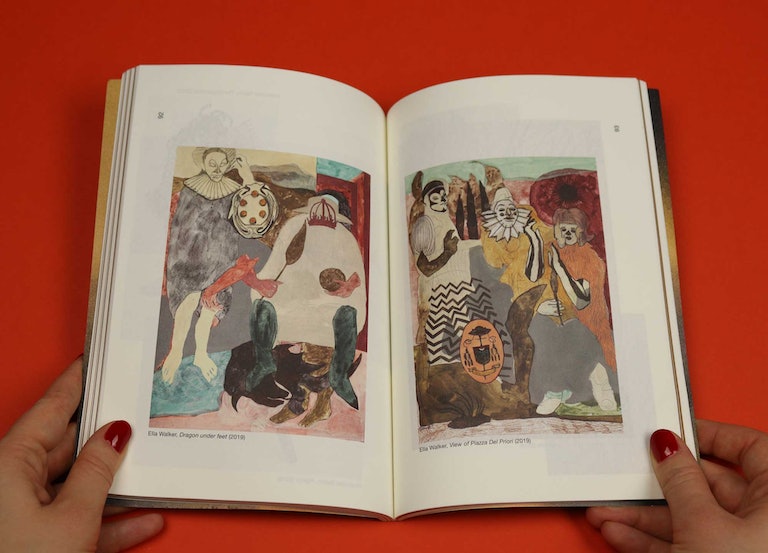 Do I dare to eat a peach?

Initiation and taboo in Sand Journal 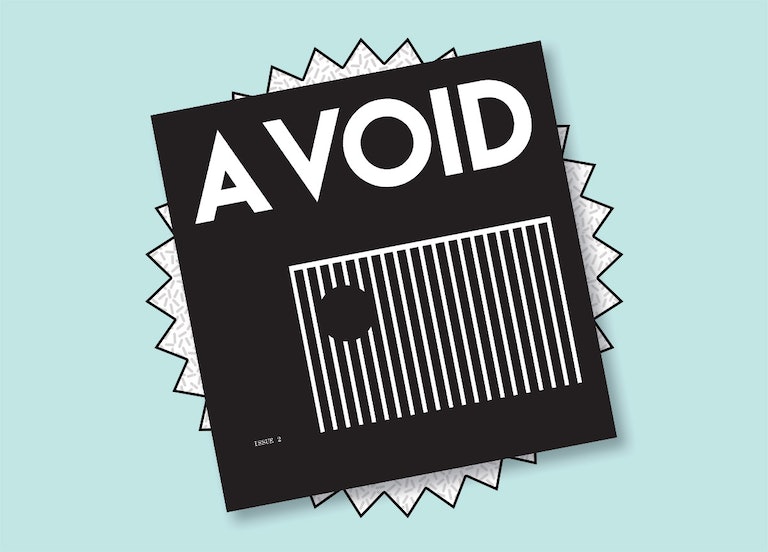