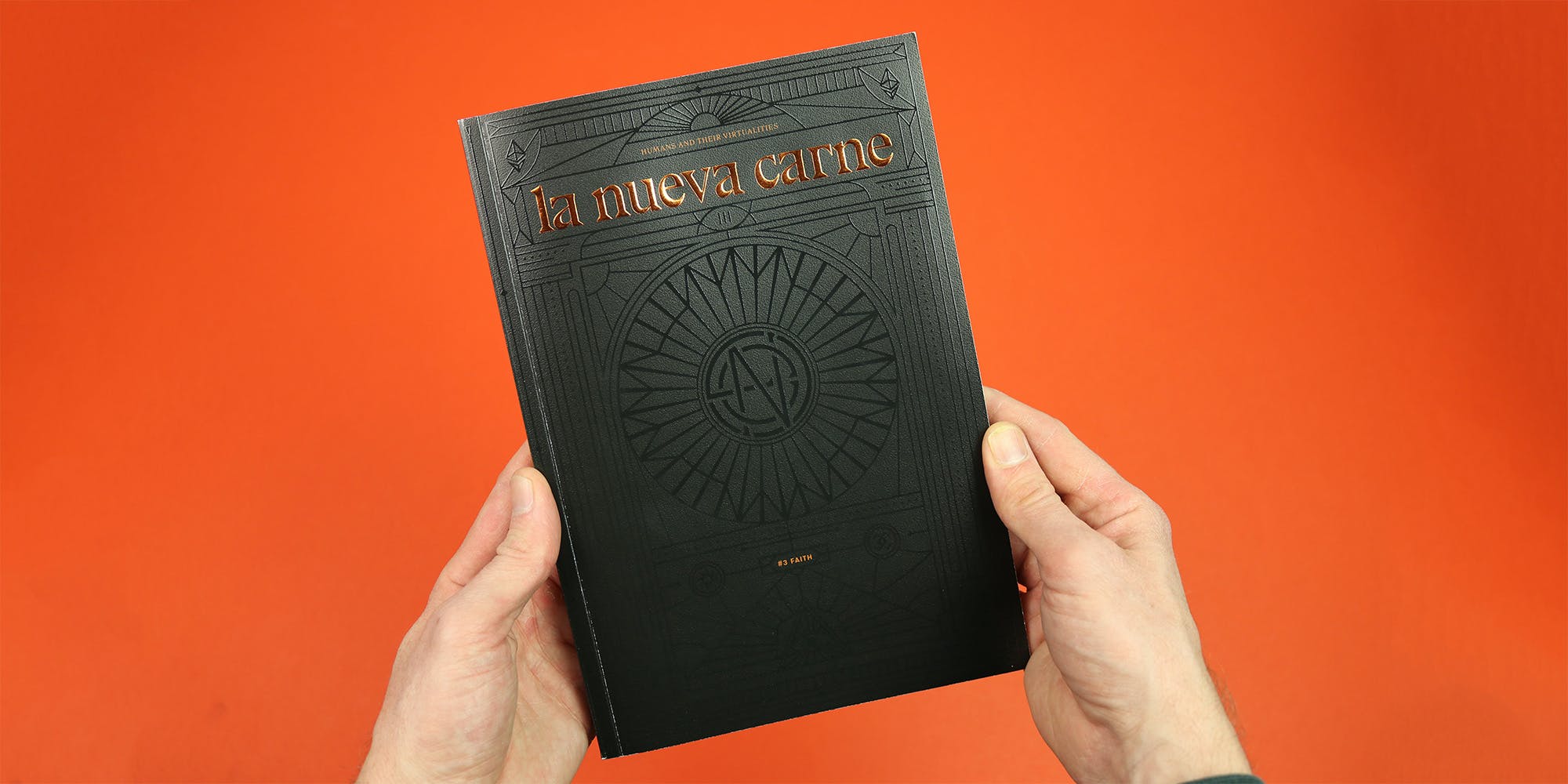 Our December 2021 delivery to Stack subscribers was issue three of Barcelona-based magazine La Nueva Carne. A future-facing magazine that explores the increasingly complex meeting place of technology and the human body, ‘The New Flesh’ asks what it means to live in our ultra-digital age, and this latest issue is dedicated to exploring the theme of ‘Faith’. 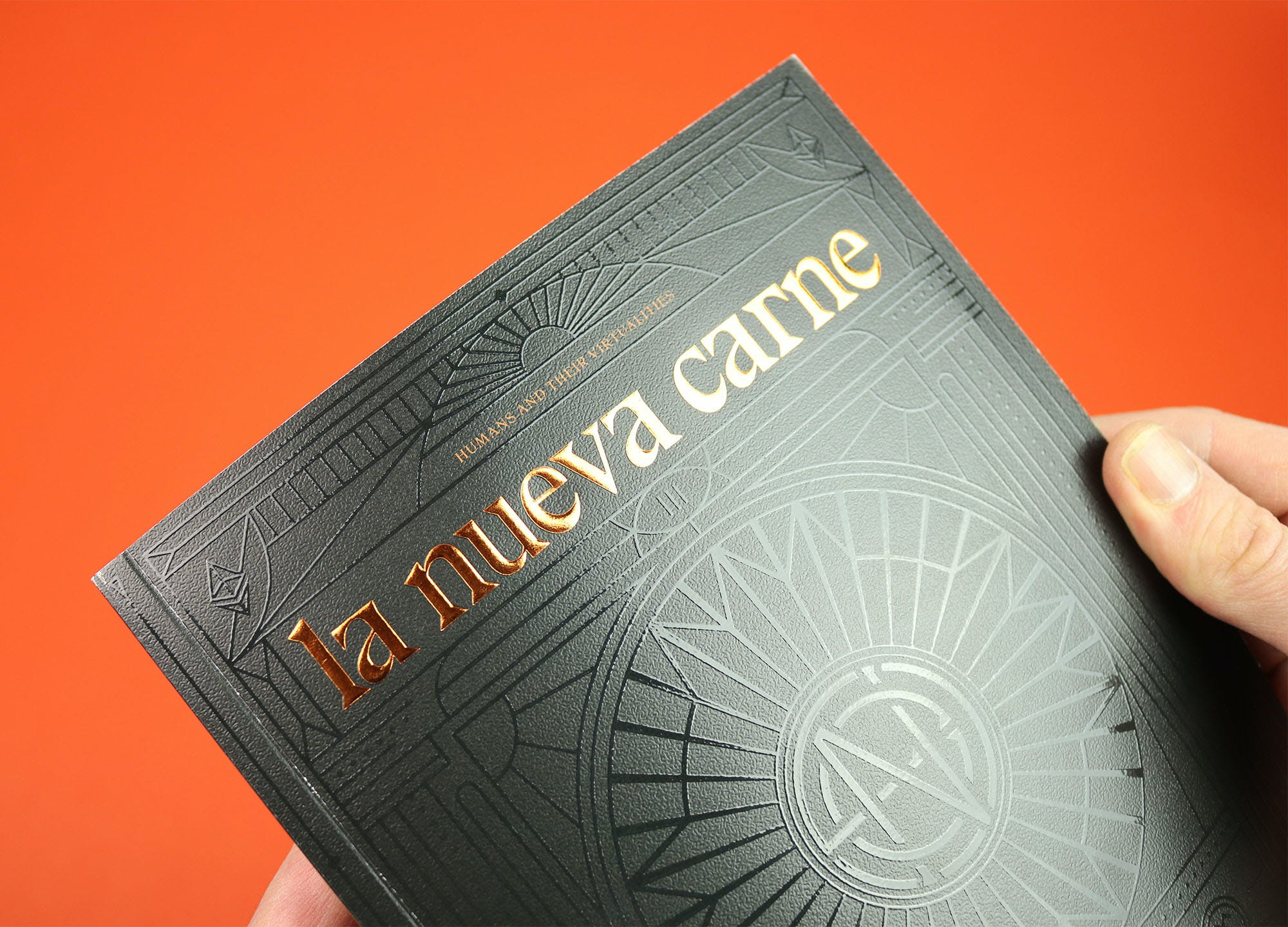 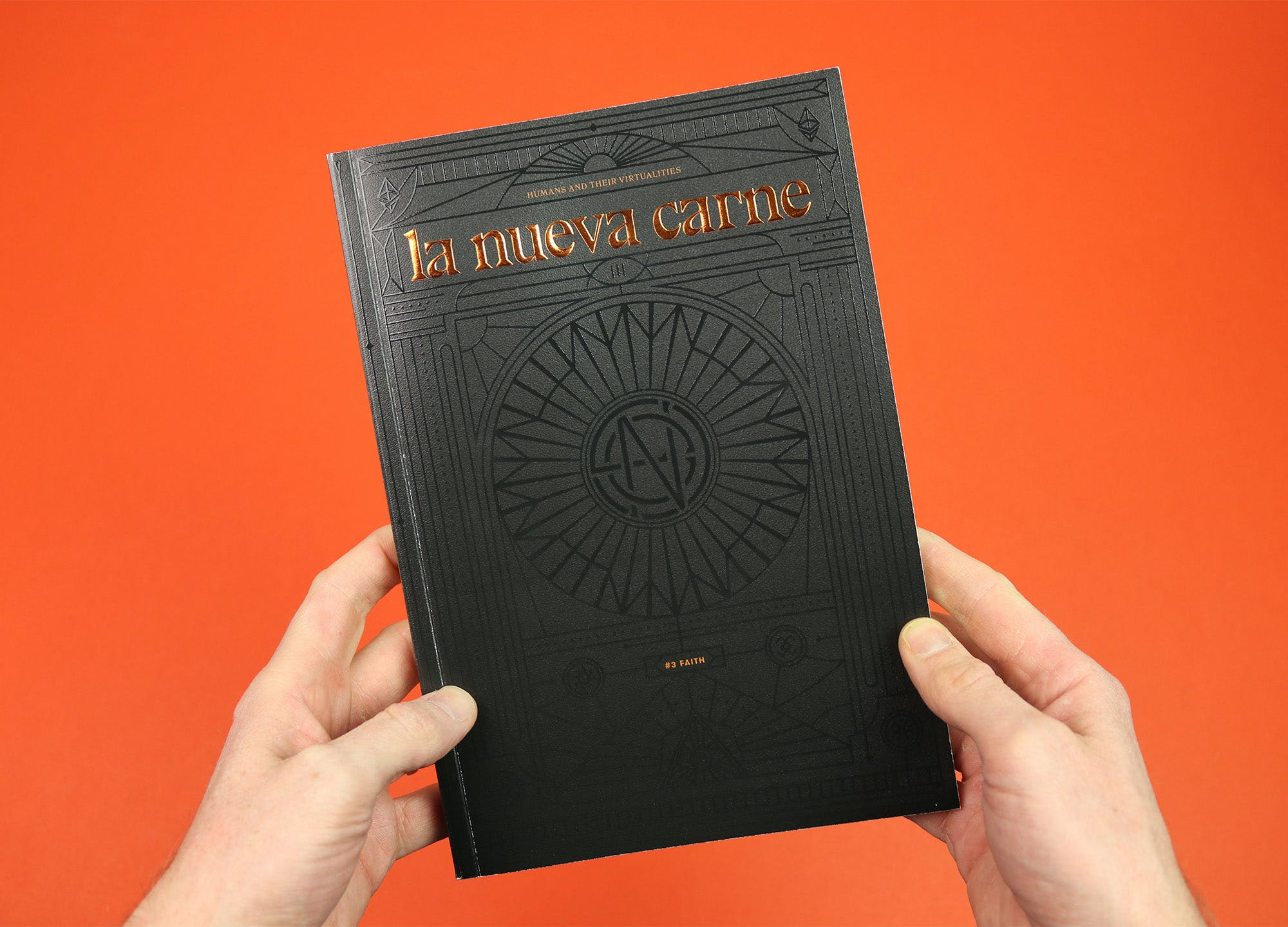 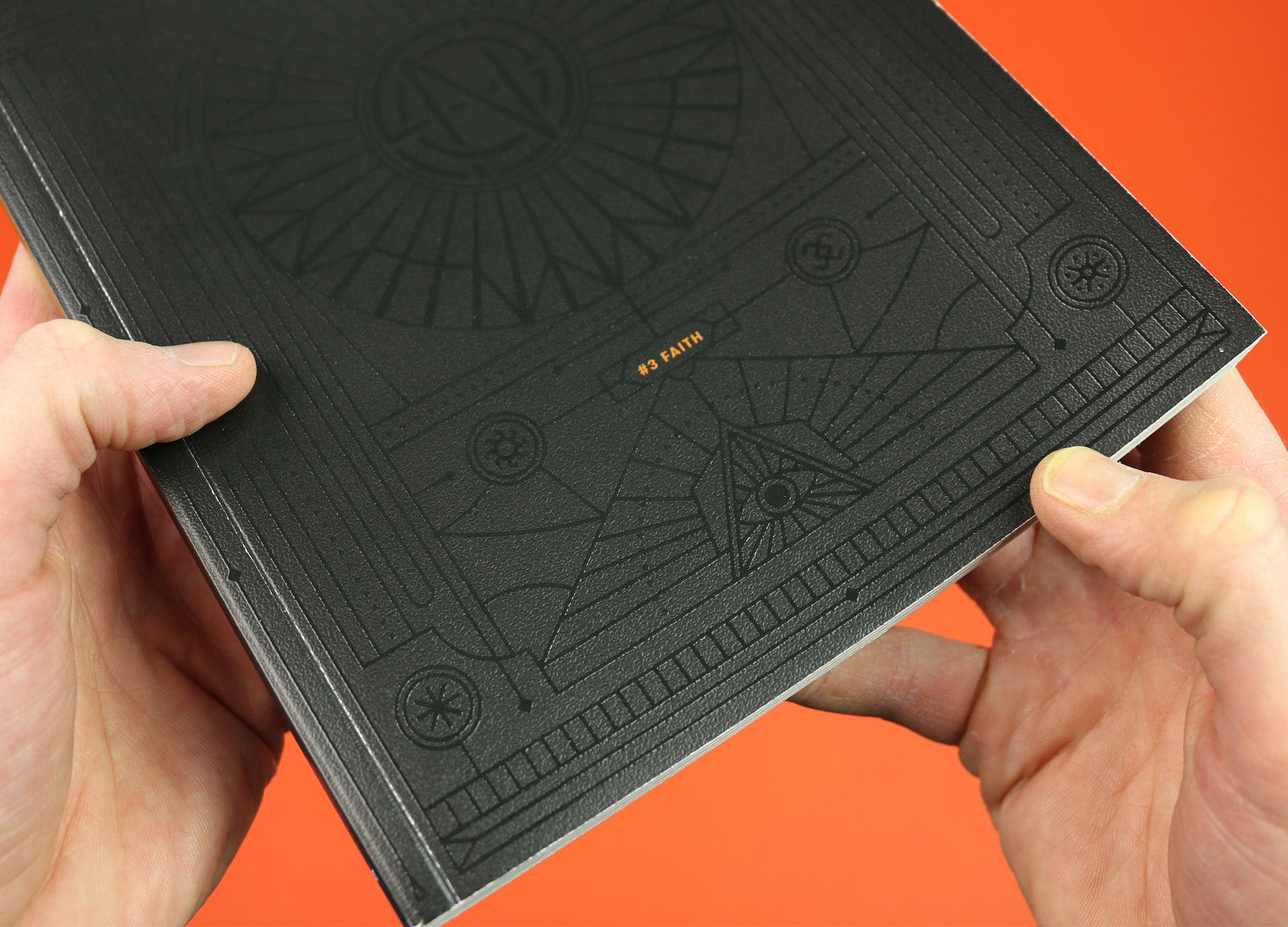 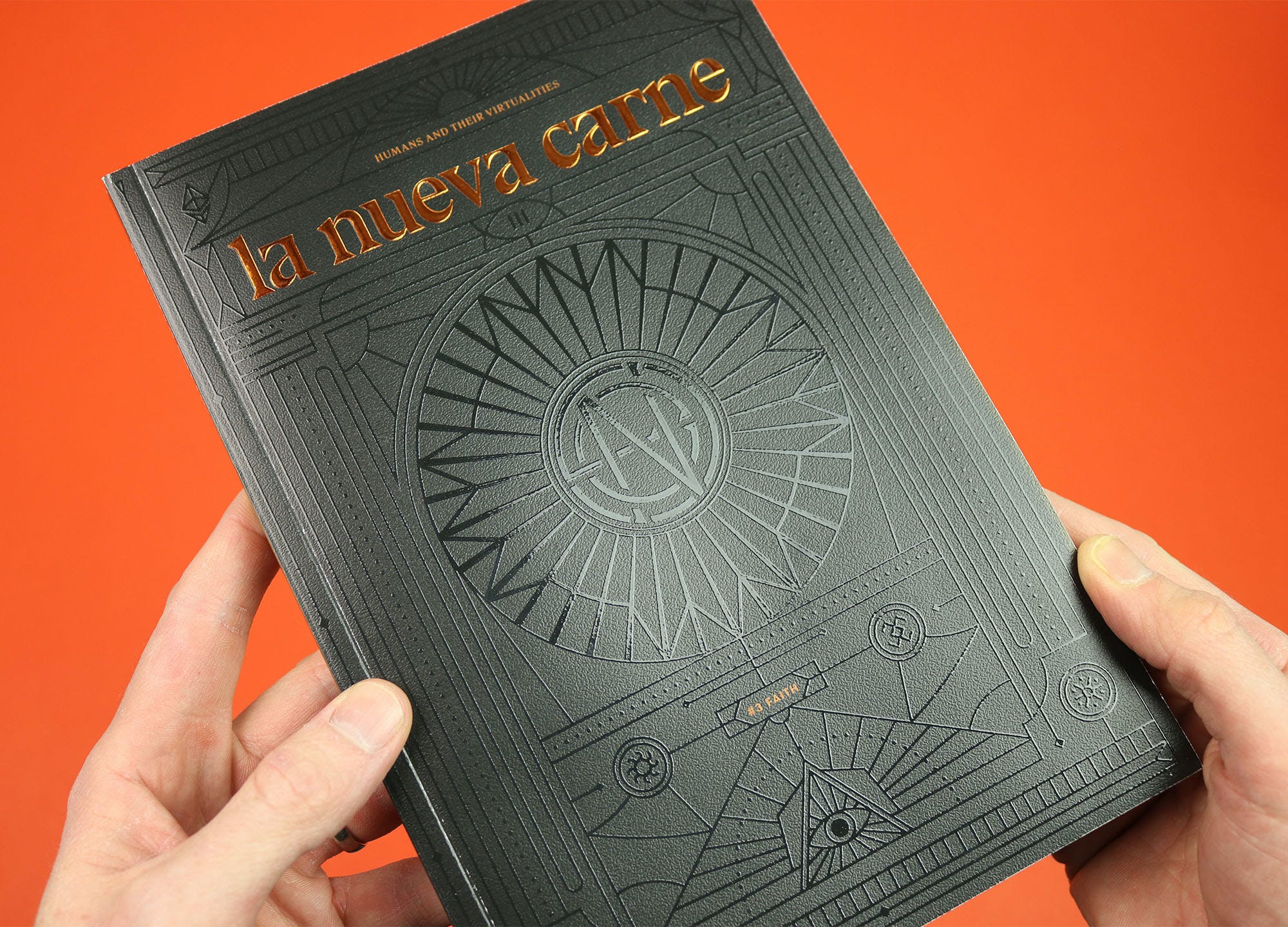 I totally love the cover, with its heavy gloss varnish on black and the embossed foil masthead, complete with symbols suggesting the occult. 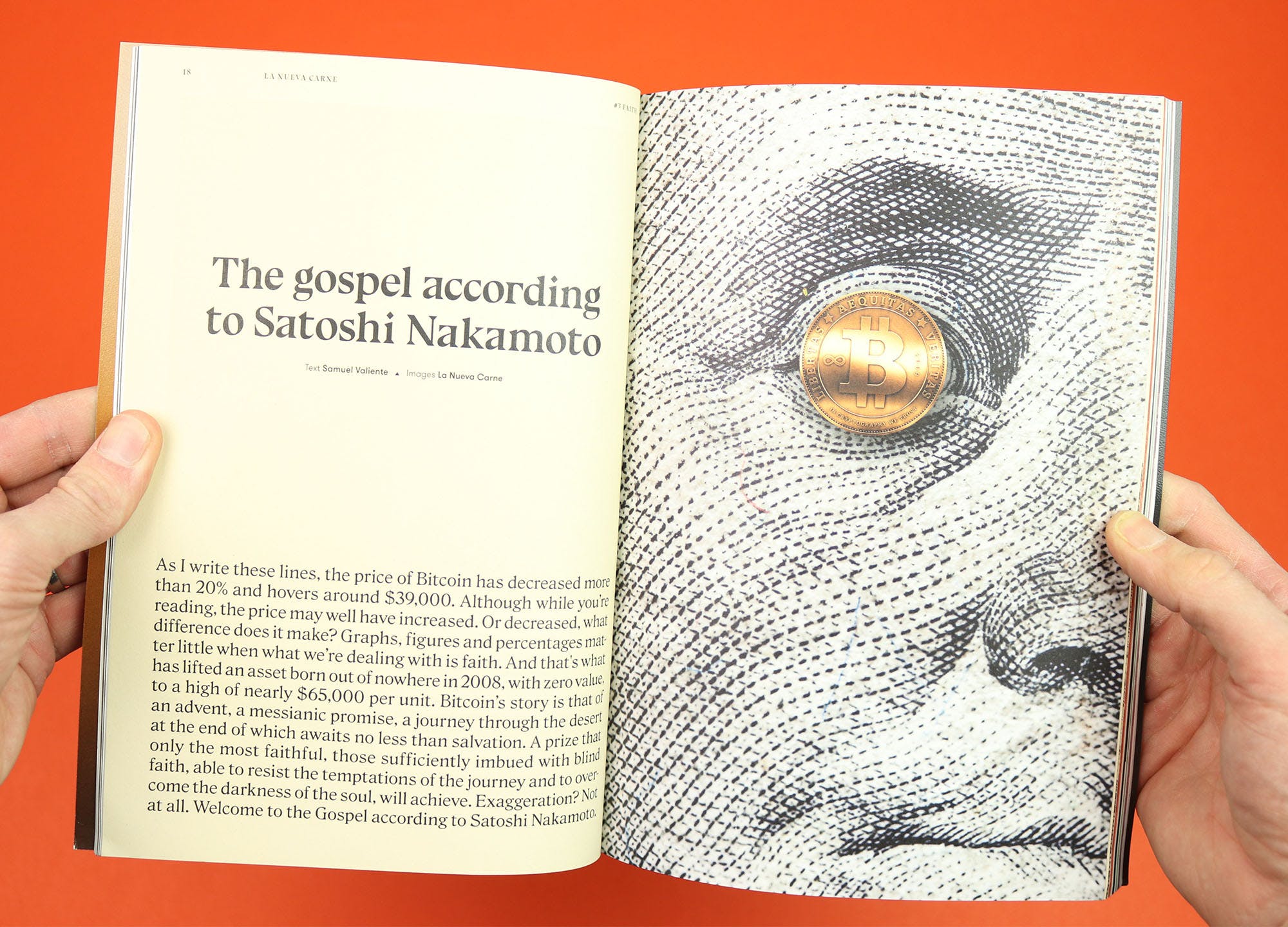 Reading the magazine, it turns out that the cutting edge of technological innovation is a place that breeds many different types of faith; for example there’s the faith that investors place in cryptocurrencies. 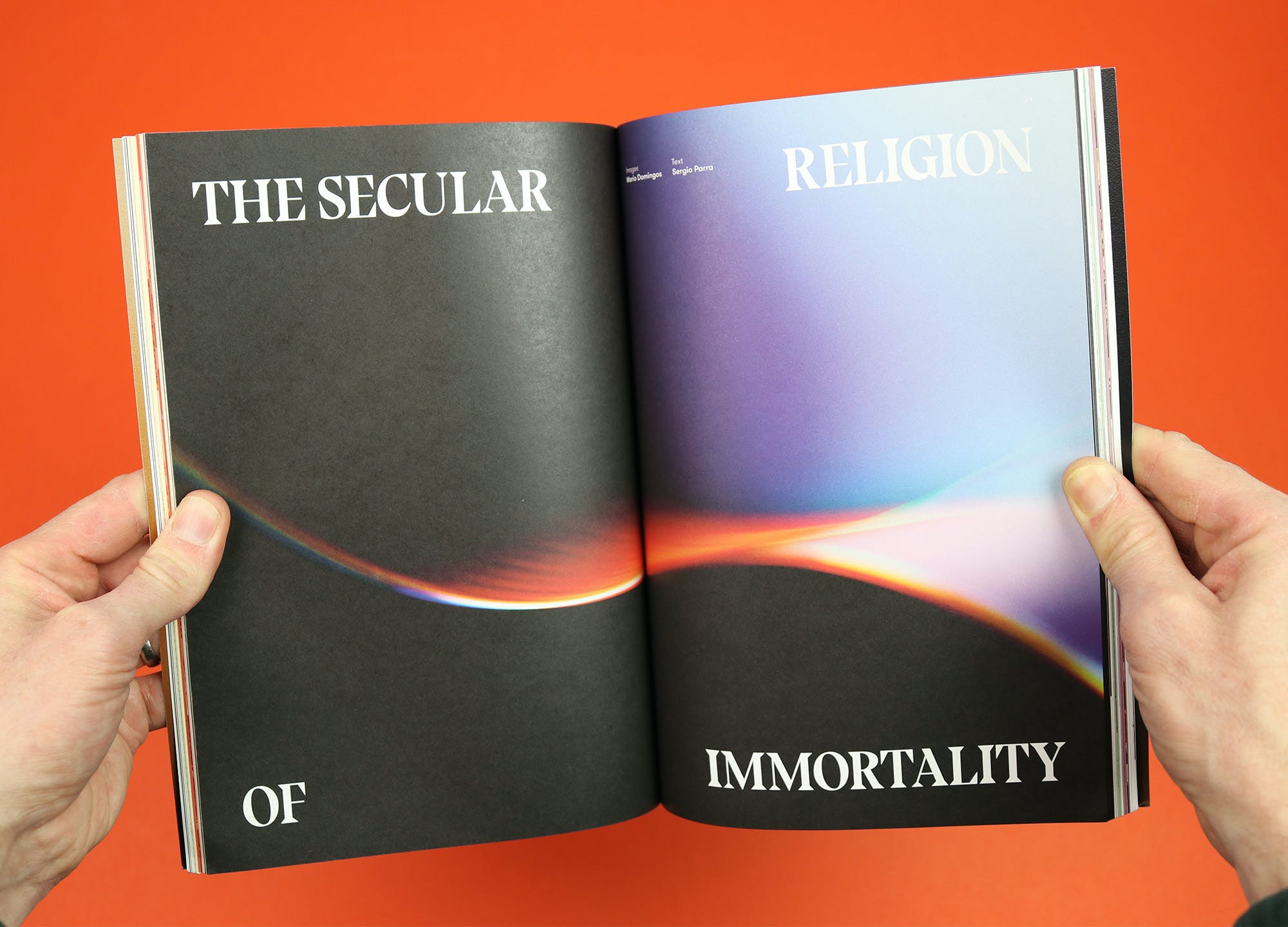 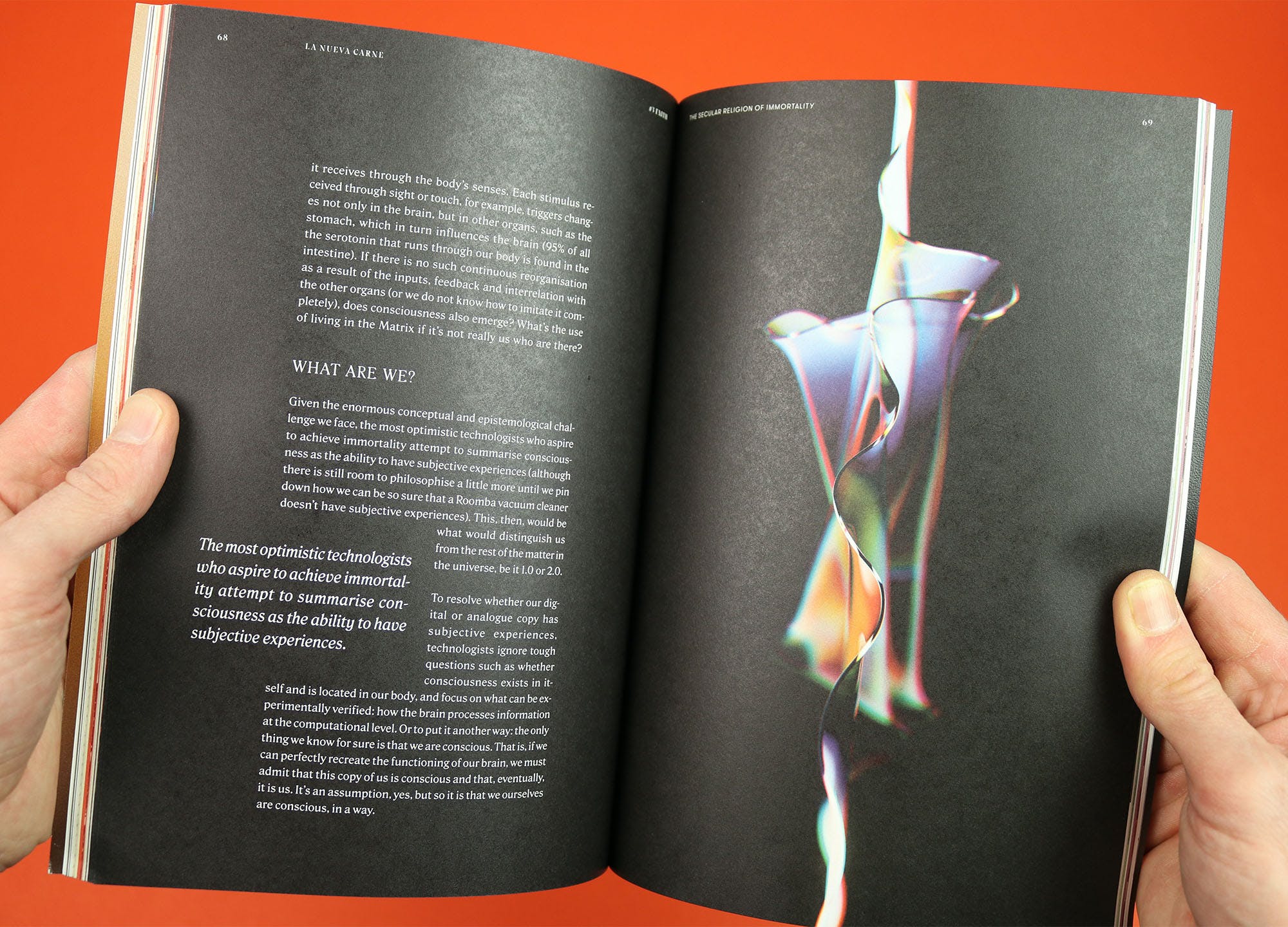 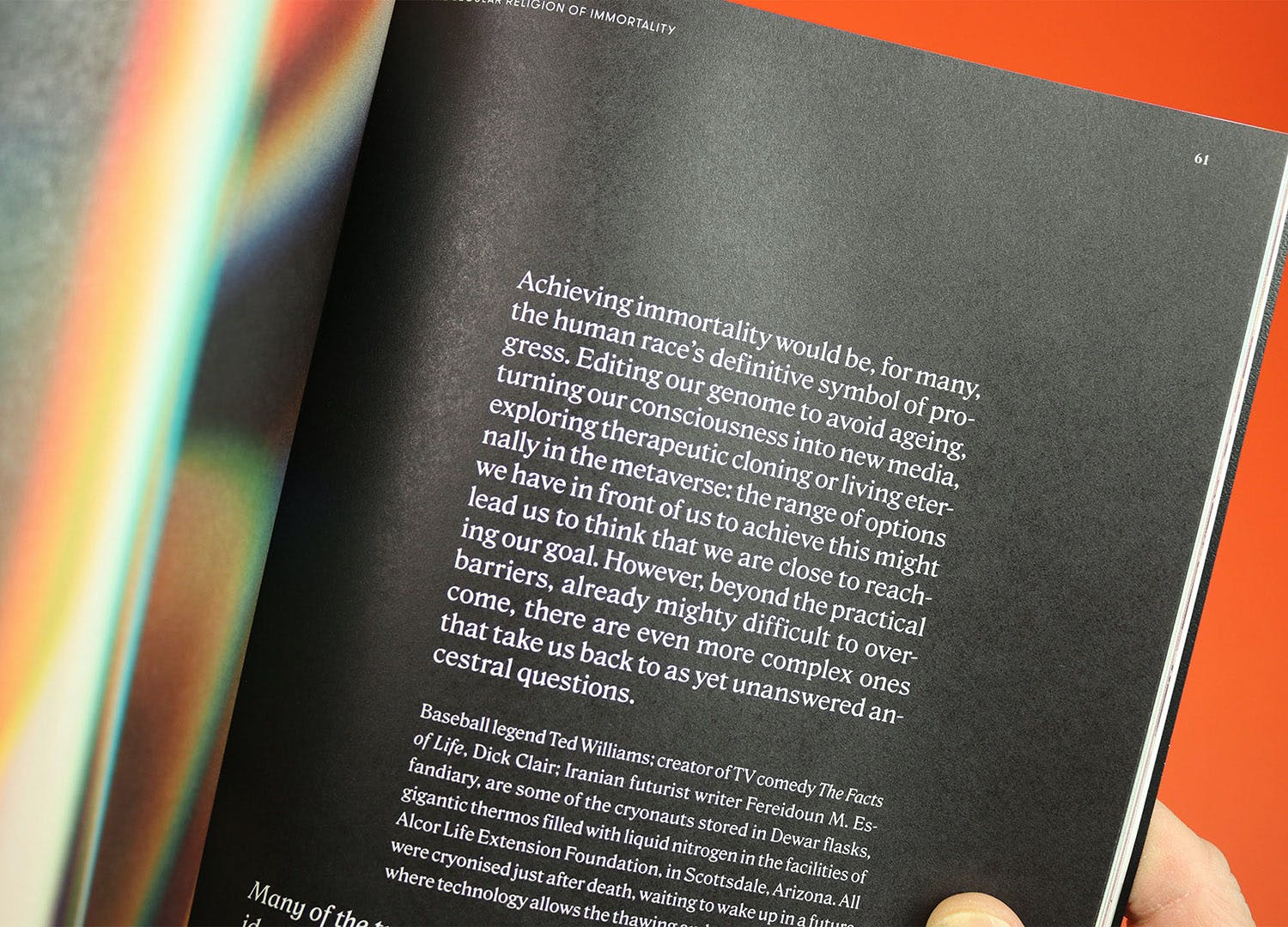 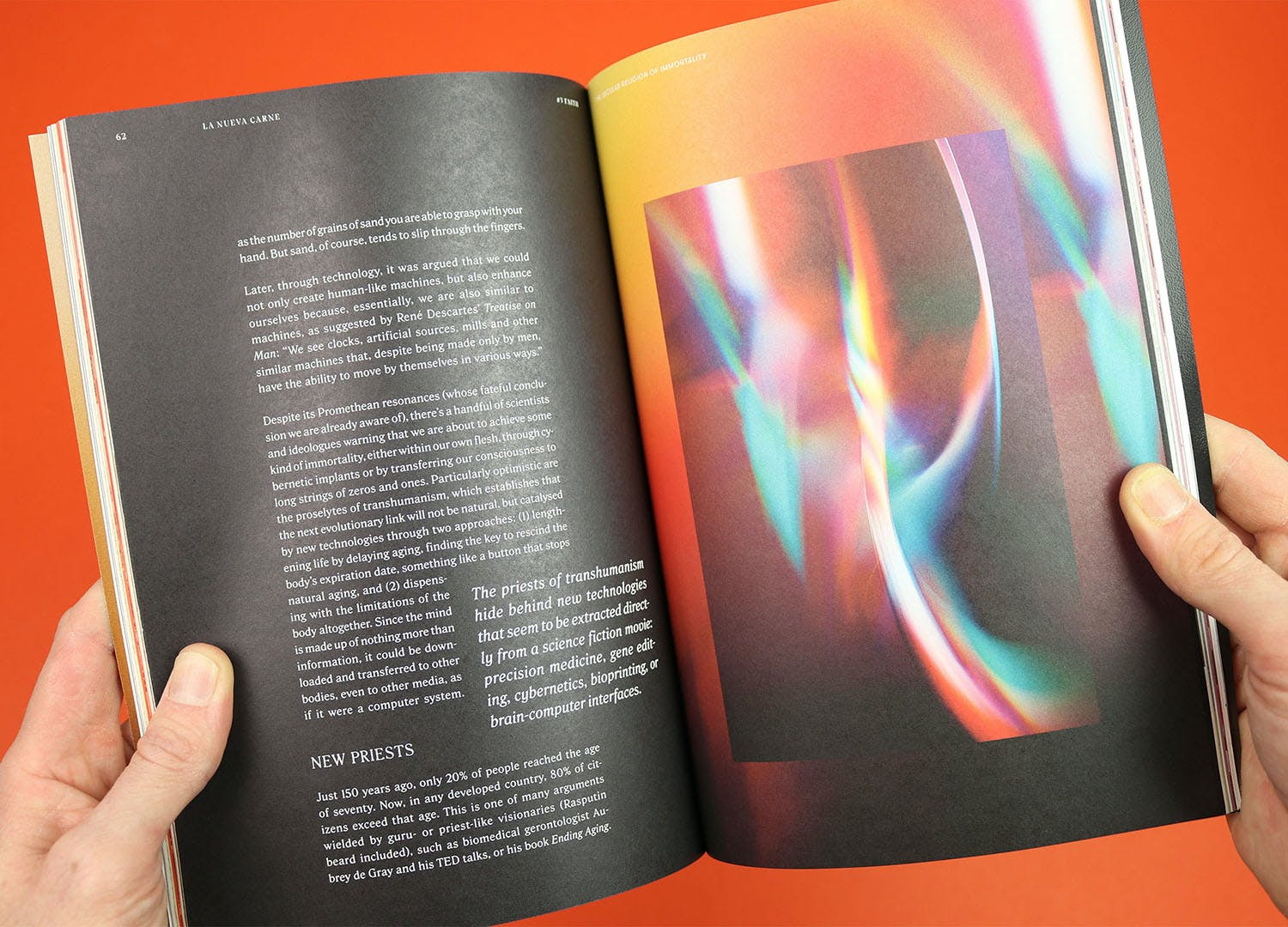 There’s the faith that one day we will uncover the secret of eternal life. 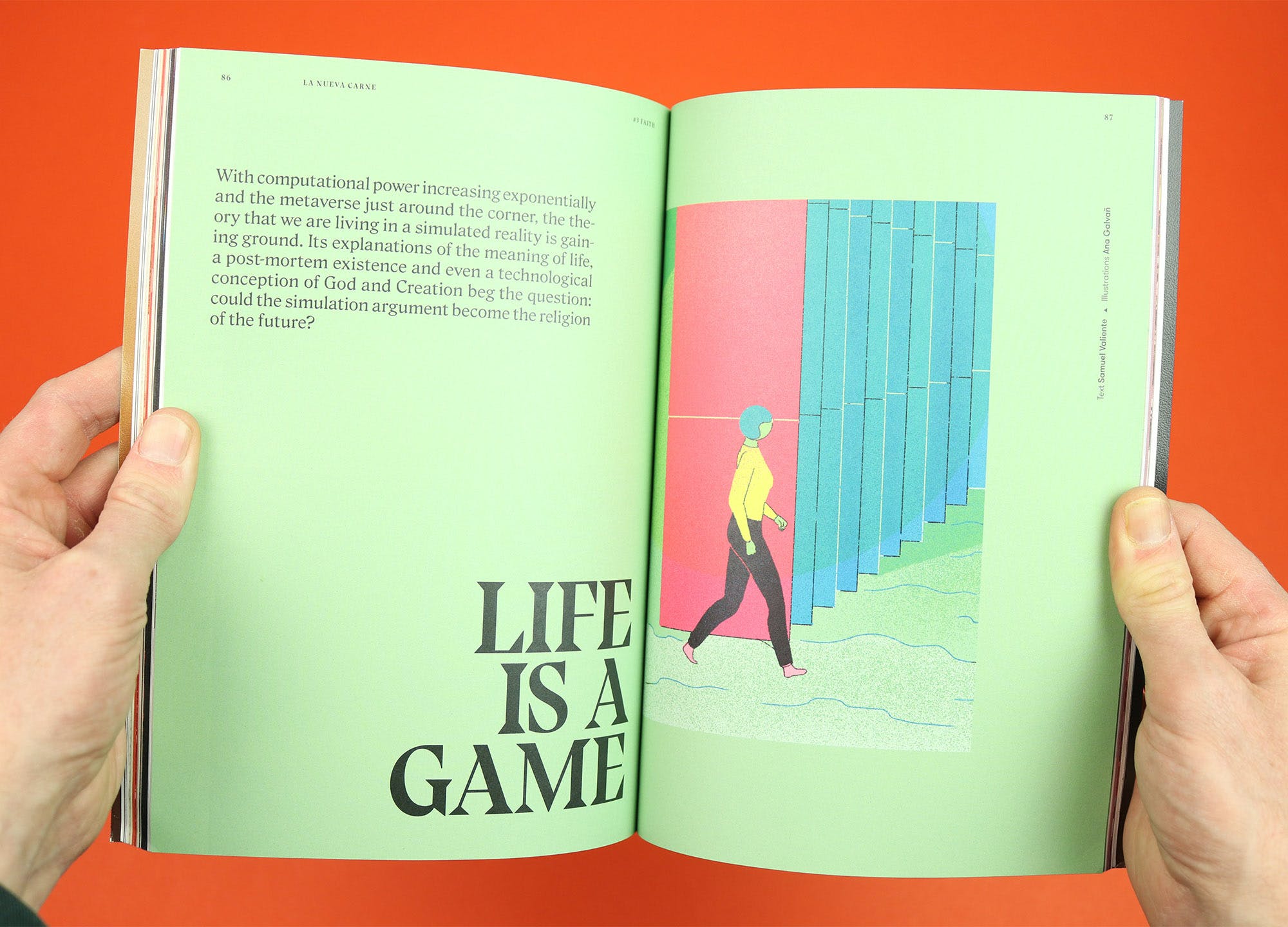 And there’s the assertion that one day, the world’s most popular religion could be the belief that we’re all living in a computer simulation.

Some of the writers seem particularly open to their subjects, and the piece on computer simulated existence has fun with the idea that, “the probability that we are living in the only non-simulated reality is negligible.” 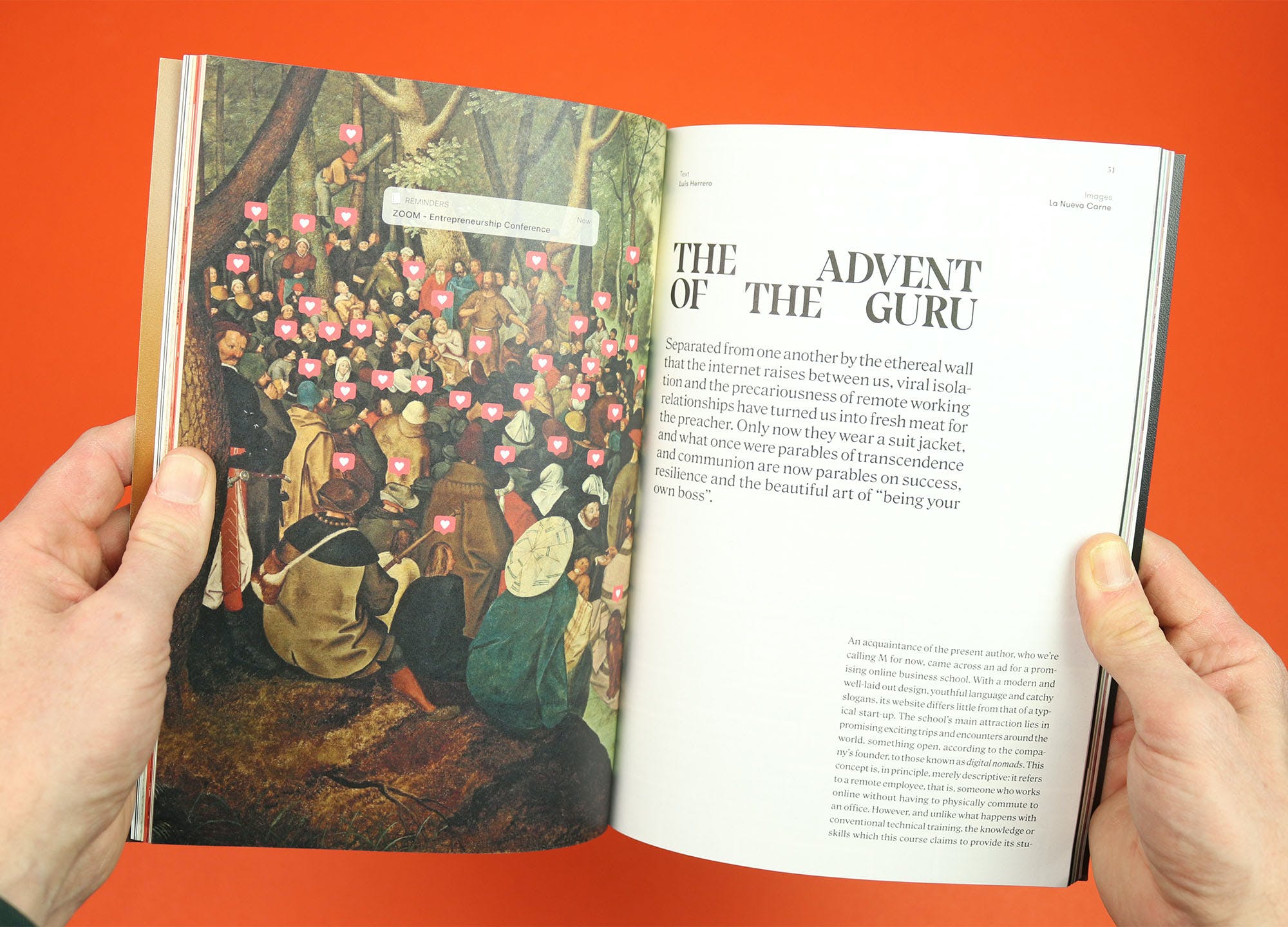 Others are more sceptical, and one of my favourite articles in the magazine is Luis Herrero’s scathing demolition of online gurus and pseudo-therapists, which he identifies as flourishing online when various lockdowns kept us physically separated from each other over the last couple of years. 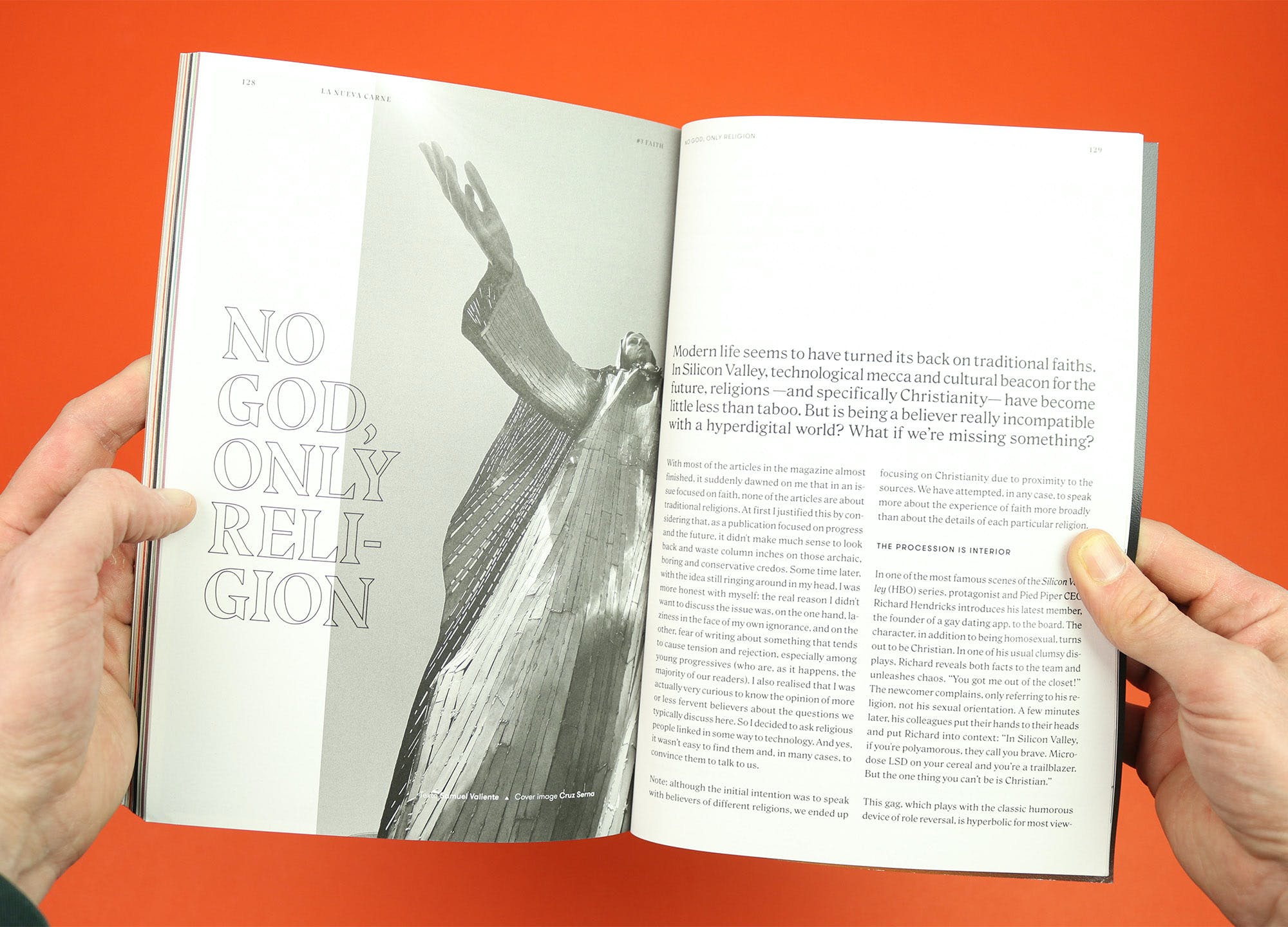 Even in its most sceptical moments, though, La Nueva Carne retains its openness, introducing readers to these new ideas and the people who are driving them forward. So it’s notable that in the final story the tone changes when focus switches to the subject of mainstream religion.

Editor Samuel Valiente uses this piece to explain why he had initially planned to leave the major religions out of the magazine, why he changed his mind, and how he found it unusually difficult to put this final article together. After more than 100 pages of fringe ideas and bold assertions, it seems that these days in Silicon Valley, the greatest faith-based taboo is traditional Christianity. 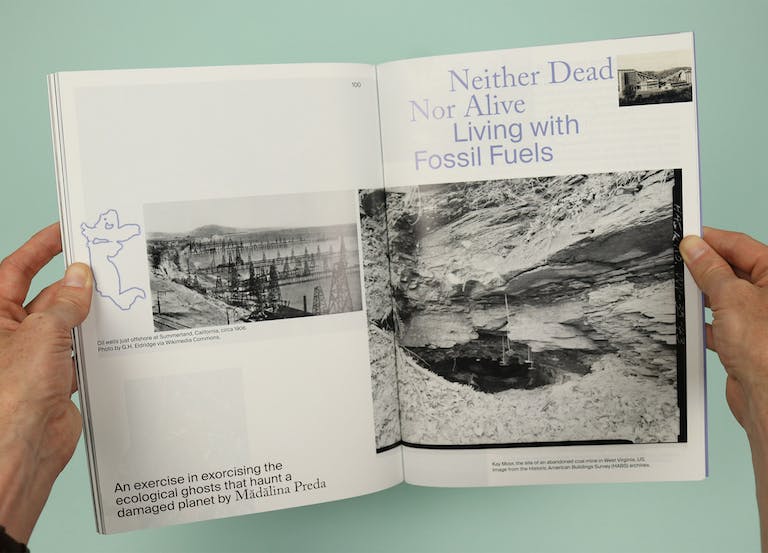 Take a philosophical amble through The Future of Ghosts