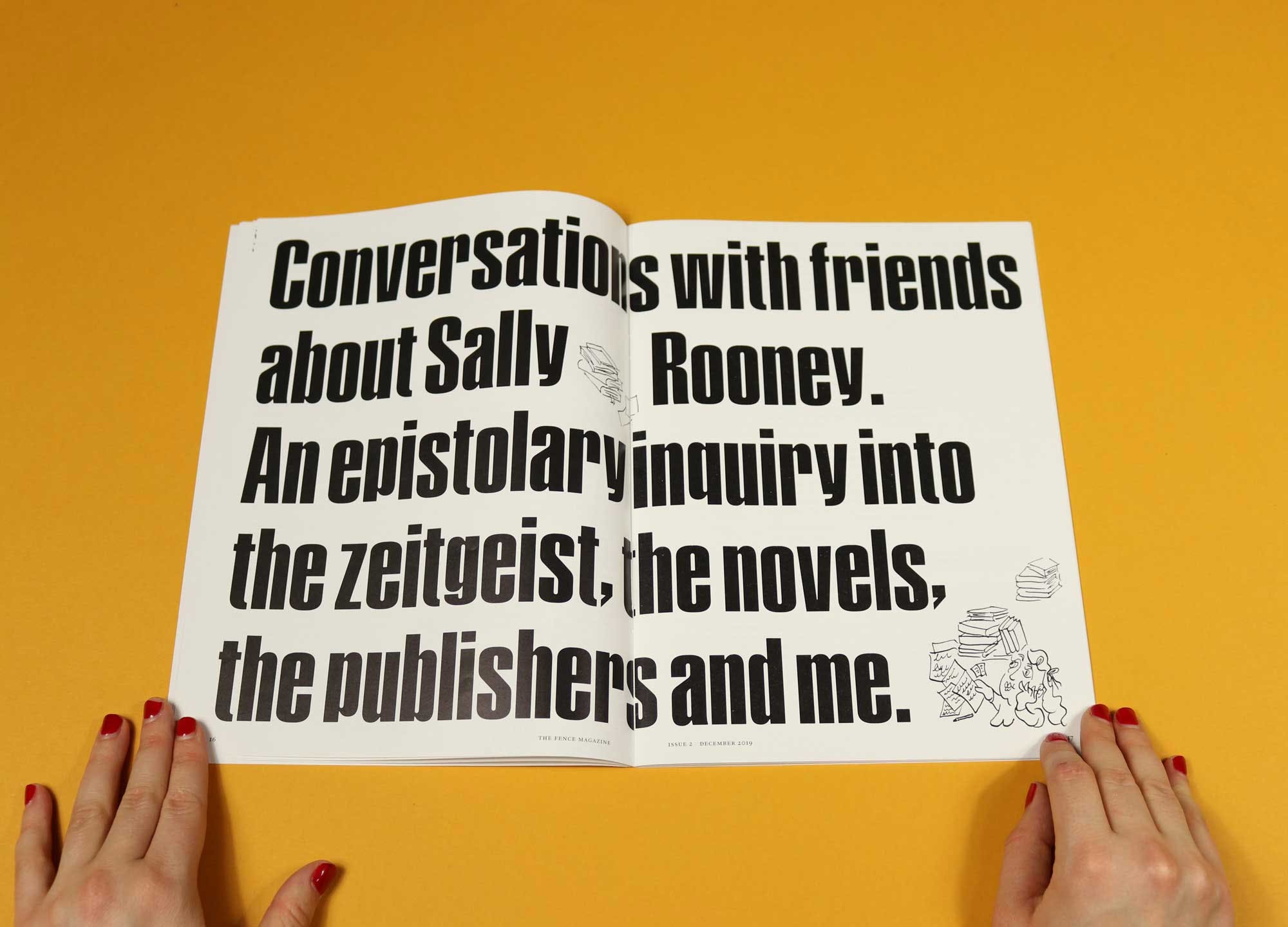 The Fence is a satirical magazine about London that includes, among other things, an account of a Chuka Umunna-organised silent disco and a regular diary entry from a priest. Every contributor writes under a pseudonym but the Reverend JJ — who struggles, in this column, with flashbacks to an ill-advised karaoke sesh from the noughties — is a priest in real life. (Chuka Umunna didn’t ever organise a silent disco, though).

The highpoint is an epistolary essay about why Sally Rooney is overrated (Conversations with Friends about Sally Rooney). Written by an unnamed “failed novelist” who introduces herself as “a deeply jealous person”, the essay is almost entirely made up of emails from other people writing to her to say yes, she is right, Rooney is bad. Part of why this works so well is that the emails are all beautifully written. Satire gets boring quite quickly when there is nothing at stake. You get the feeling, reading this, that our failed novelist really does hate Sally Rooney and she is trying, with some sincerity, to tell you why. Whether or not you agree with her, it’s thought-provoking.

This is The Fence’s first proper issue, but they launched a year ago. The current editor, pseudonym Heidi Milne, took over from Freddie Marsh, because, as she writes in her editor’s letter, “I think most of London have had their fill of overgrown schoolboys feeling that they should occupy positions of power.”

We asked her what she’s changed. 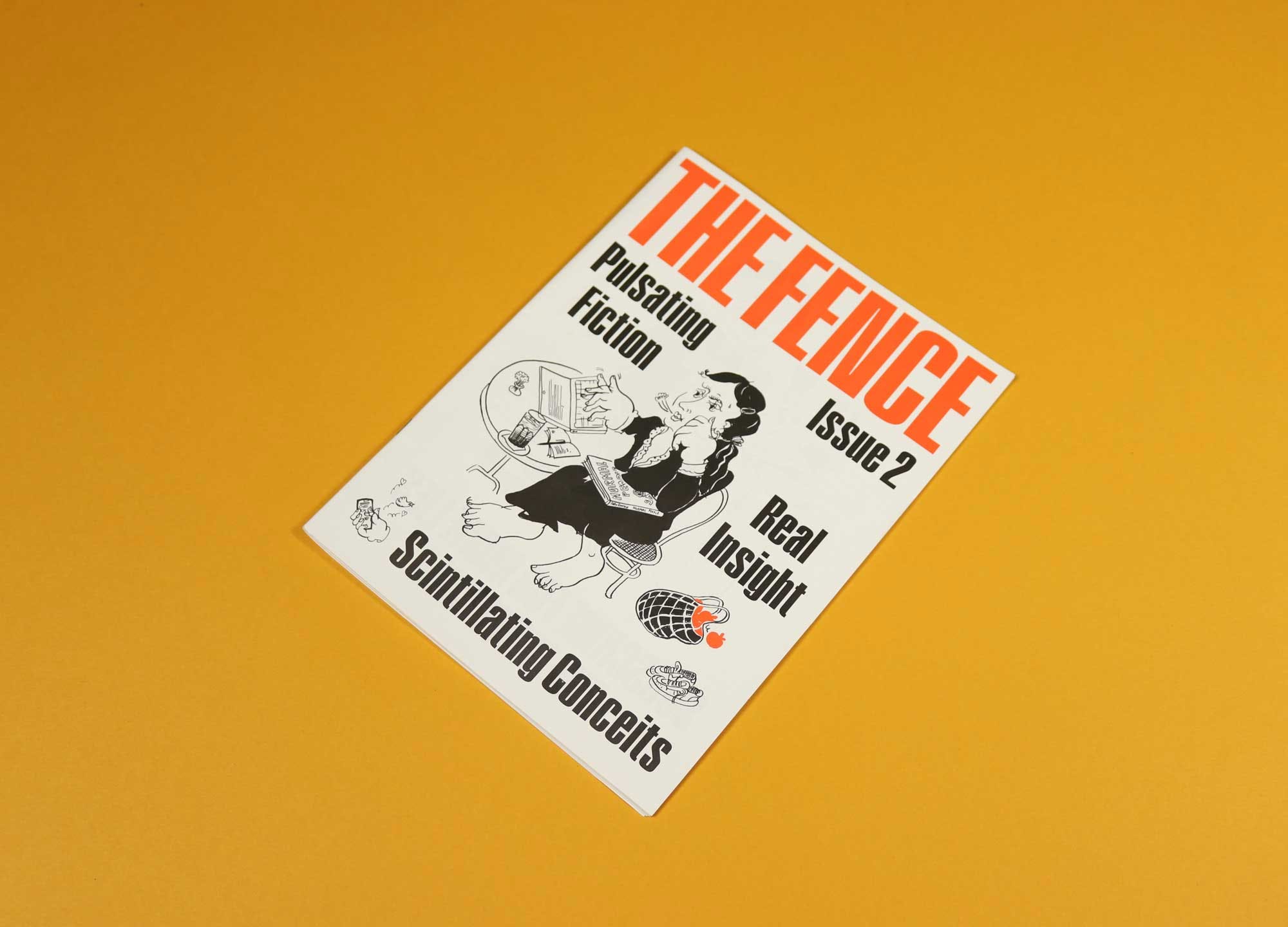 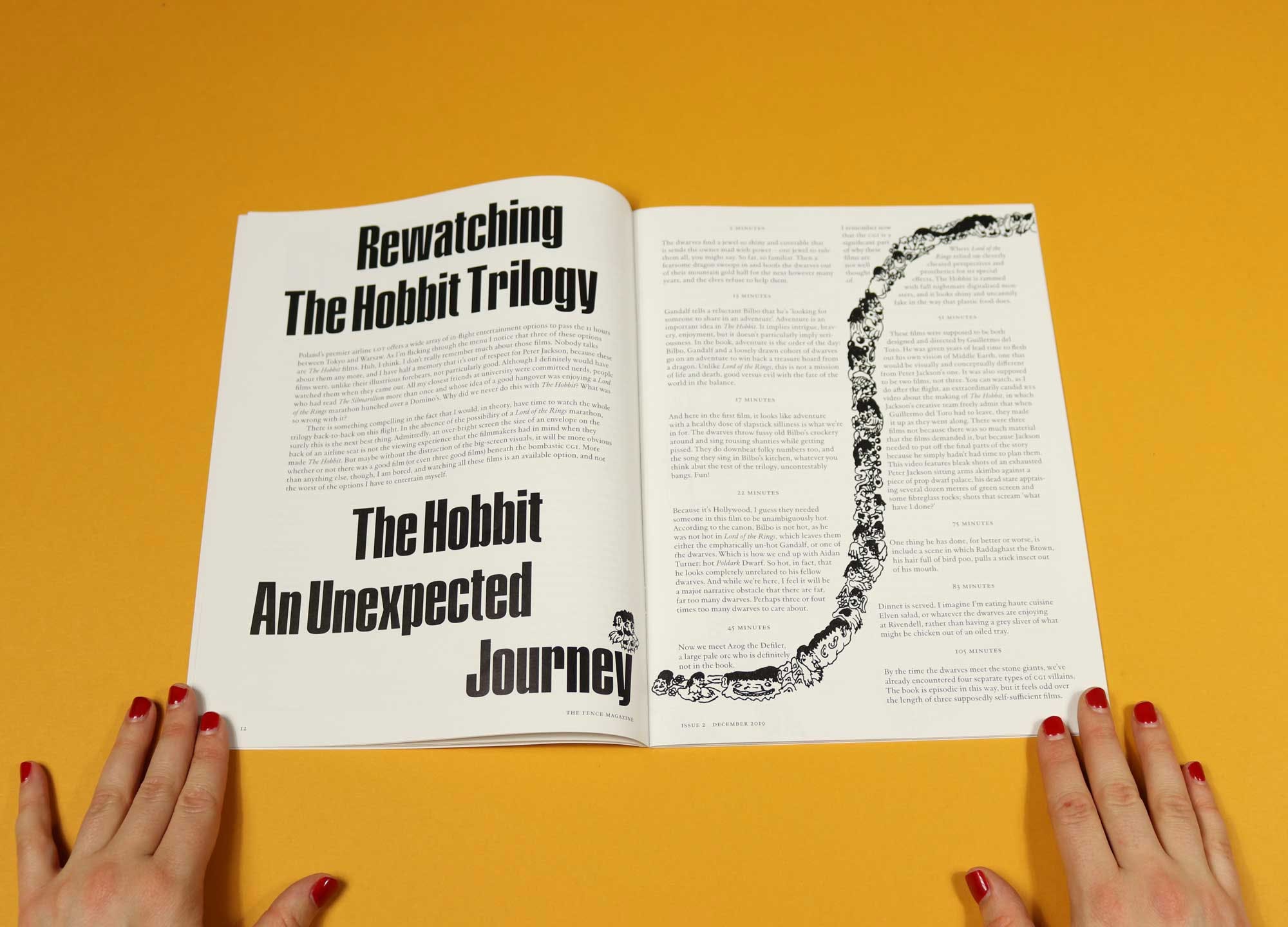 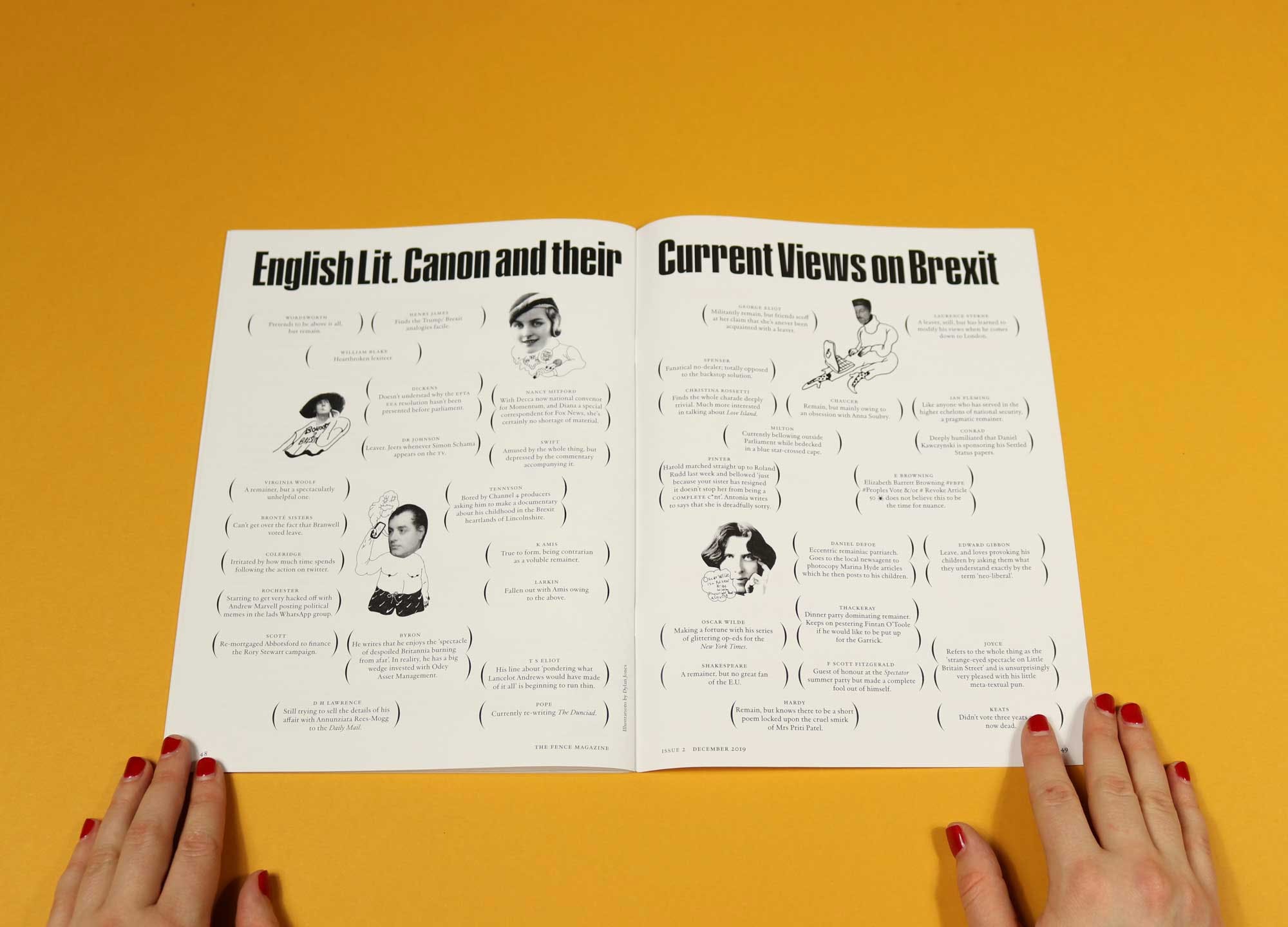 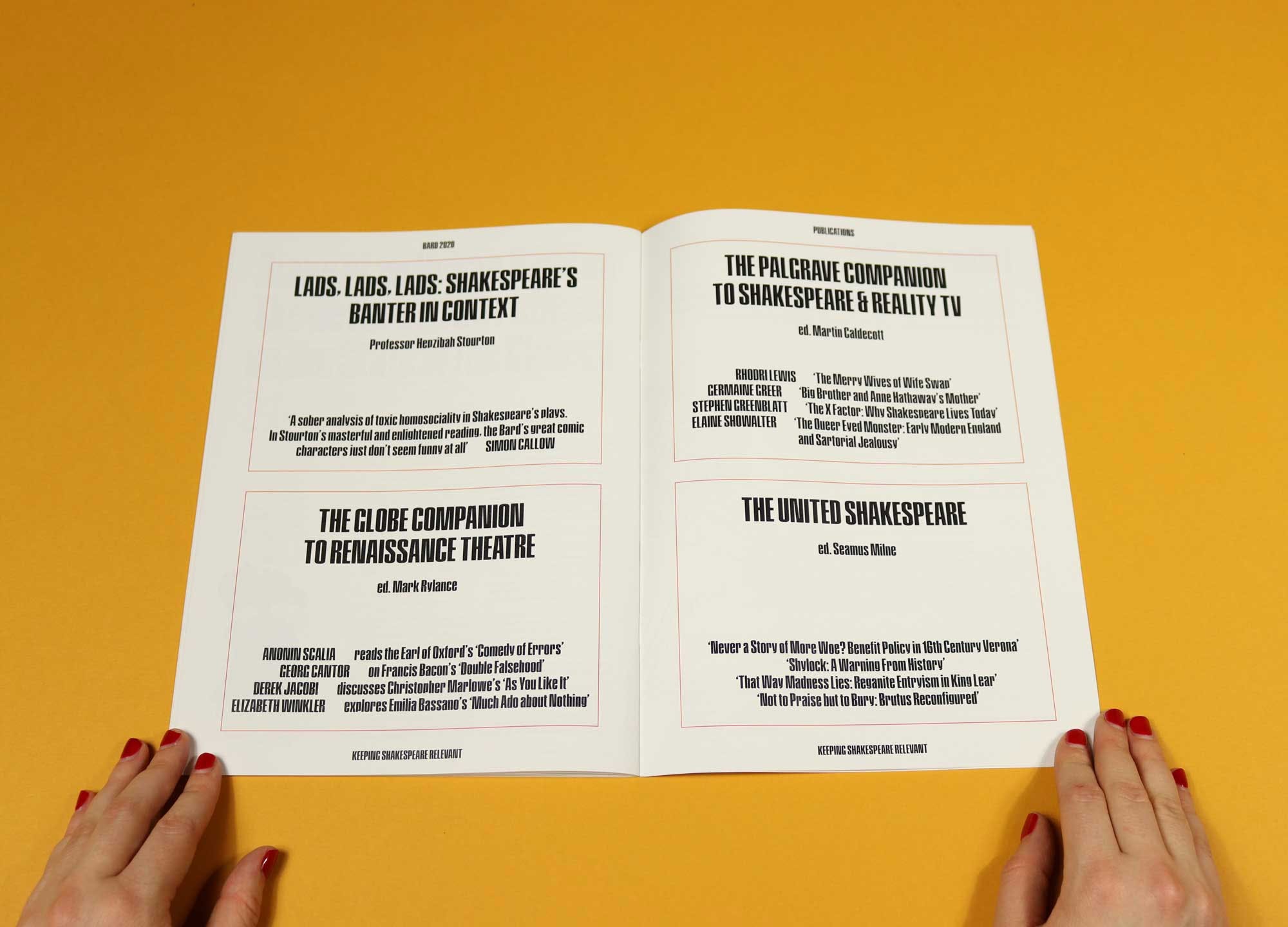 Part of what is so good about this magazine is it knows how to make fun of itself. For example, you tell us in your editor’s letter that one reader described the issue 0 as a ‘72 page pamphlet of entitled nihilism.’ Did they really?

Yes, it was actually a friend of the outgoing editor.

Are they still friends?

Yes! It was a fair charge, actually. When you’re starting up a magazine something can sound like a great idea, and then it’s just not good on paper. That’s why we had an issue zero. But we’ve kept the best part of that original issue’s energy.

What have you changed?

As editor, I wanted to organise the magazine into four different areas. Firstly, I wanted columns by named writers such as Séamas O’Reilly, who writes as Flann O’Brien, our Westminster correspondent, doing away with the complete anonymity of Issue 0. I also wanted a tighter focus on literary satire, such as the Sally Rooney piece and ‘The Literary Canon’s views on Brexit’, as well as including fiction such as Tamara Colchester’s woebegone therapist. And pieces from insiders spilling the beans — like our anonymous chef who reviews food critics, only serving up hatchet jobs. I’ve also got an insider account of working at Newsnight from a young female producer coming in for the next issue. I also wanted more women working on the magazine, which we’ve achieved — we outnumber men is this issue.

The piece about Sally Rooney being overrated is great. I thought it was interesting the way that it took the the fragmentary style of a long-form piece in the White Review — the way those essays can read, irritatingly, like a long series of disconnected reflections — and satirised it. You have literally printed a series of fragments of other people’s emails.

Yes, as the print renaissance has happened, people have looked to publications like The TLS, The Economist and the New York Review of Books and there has been a rush for weighty content — long reads etc. We are approaching these subjects with a bit more levity. We’re also playing around with form in a way that can only be achieved in print. And the main thing is providing a platform for the best young writers to write about what they know.

If you had to put your finger on what exactly you’re satirising at The Fence, how would you define it?

We try to make sure we’re not politics obsessive, but we do try to always have an eye on Westminster. And it’s a London-based magazine. Satire has always existed to poke fun at metropolitan excess, so that aspect will always be there. This is a time, though, when self-satirists — Johnson, Rees-Mogg — are running the country. They’ve rebranded privilege as whimsy. They’ve stolen the joke from us, weaponised it even. It’s incredibly dangerous — and that danger is the thing we all have in common. 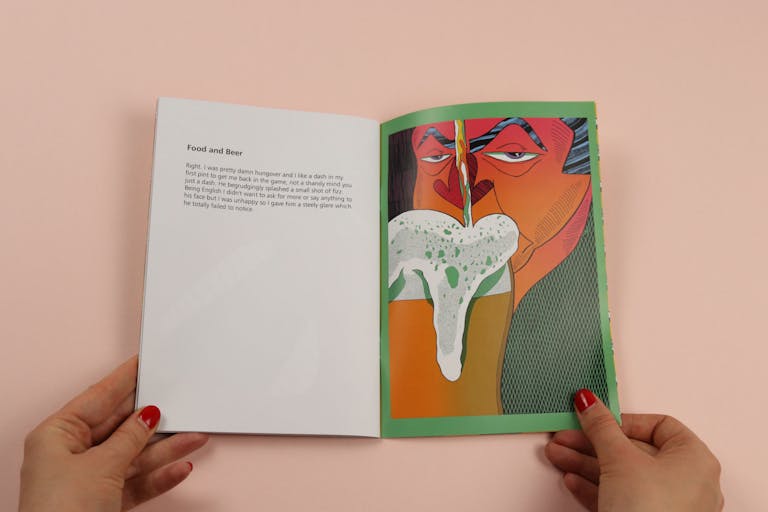 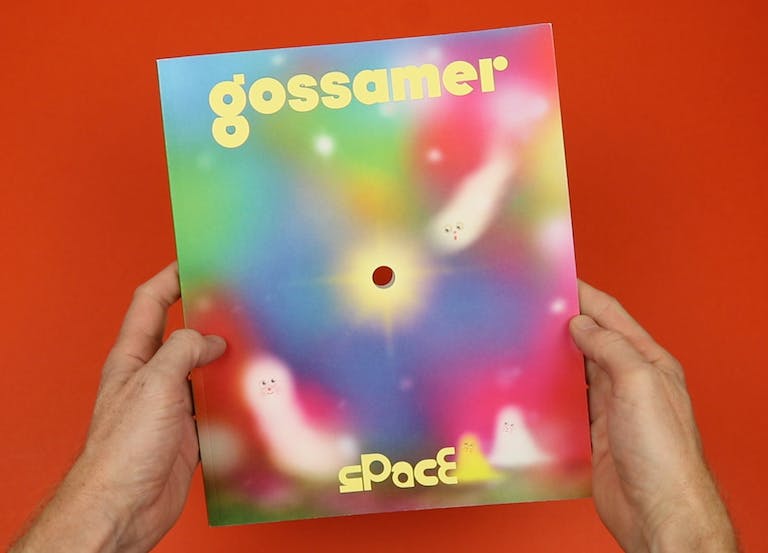 A hole lot of fun