Dirty Furniture is a magazine dedicated to the design path less trodden. An antidote to the overly glossy, immaculately presented world of design we’re more familiar with on our shelves and coffee tables, the magazine showcases the best writing on — and work in — its subject area, but takes its name from what many might see as its less savoury elements. In the words of its editors, Elizabeth Glickfeld and Anna Bates, “the dirt – the stains, the use, the associations – that accretes to furniture is where the best stories are found.”

Read on for Glickfeld and Bates’ in-depth guide to Dirty Furniture issue three – from Kim Kardashian-West to the joys of the cardboard box. 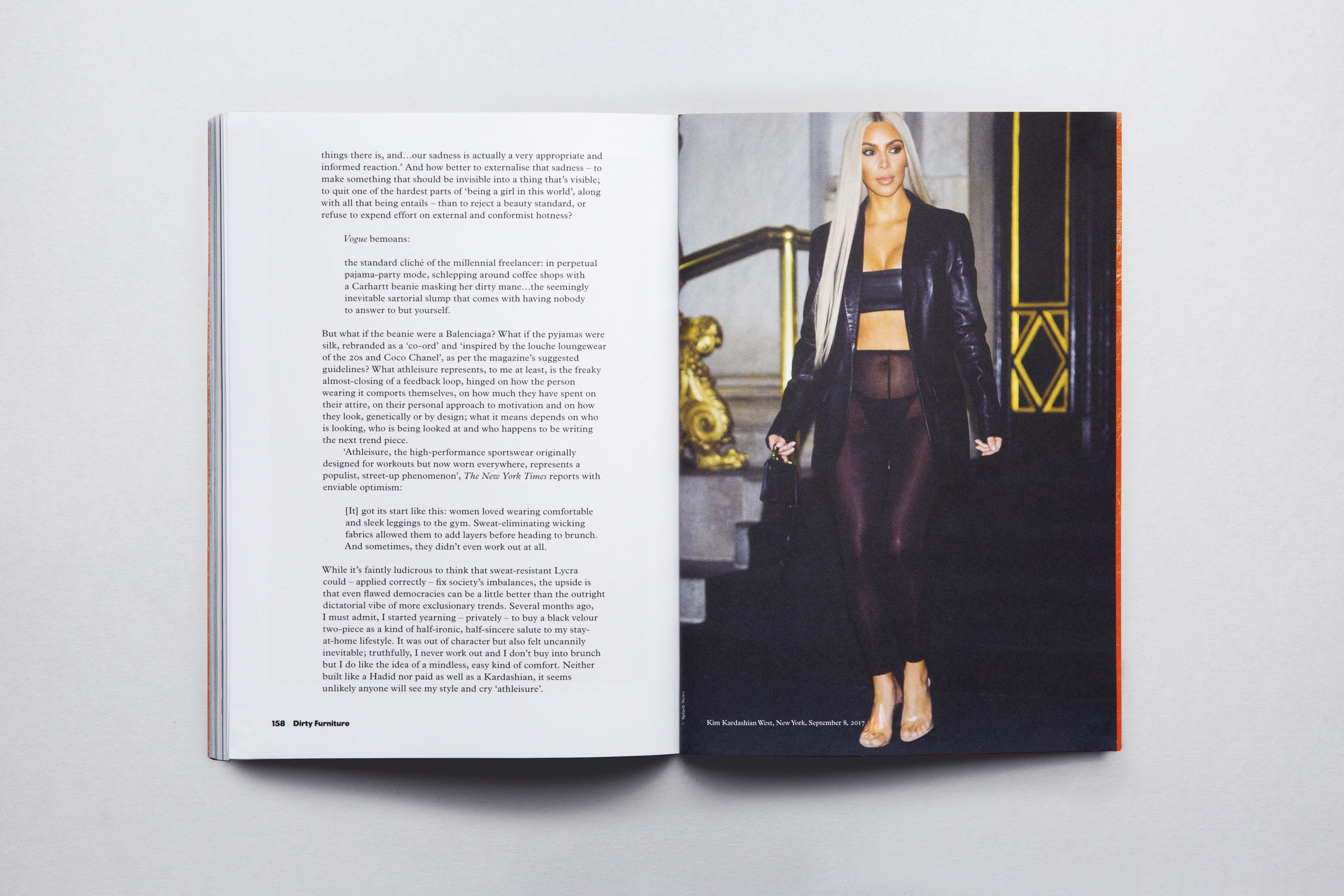 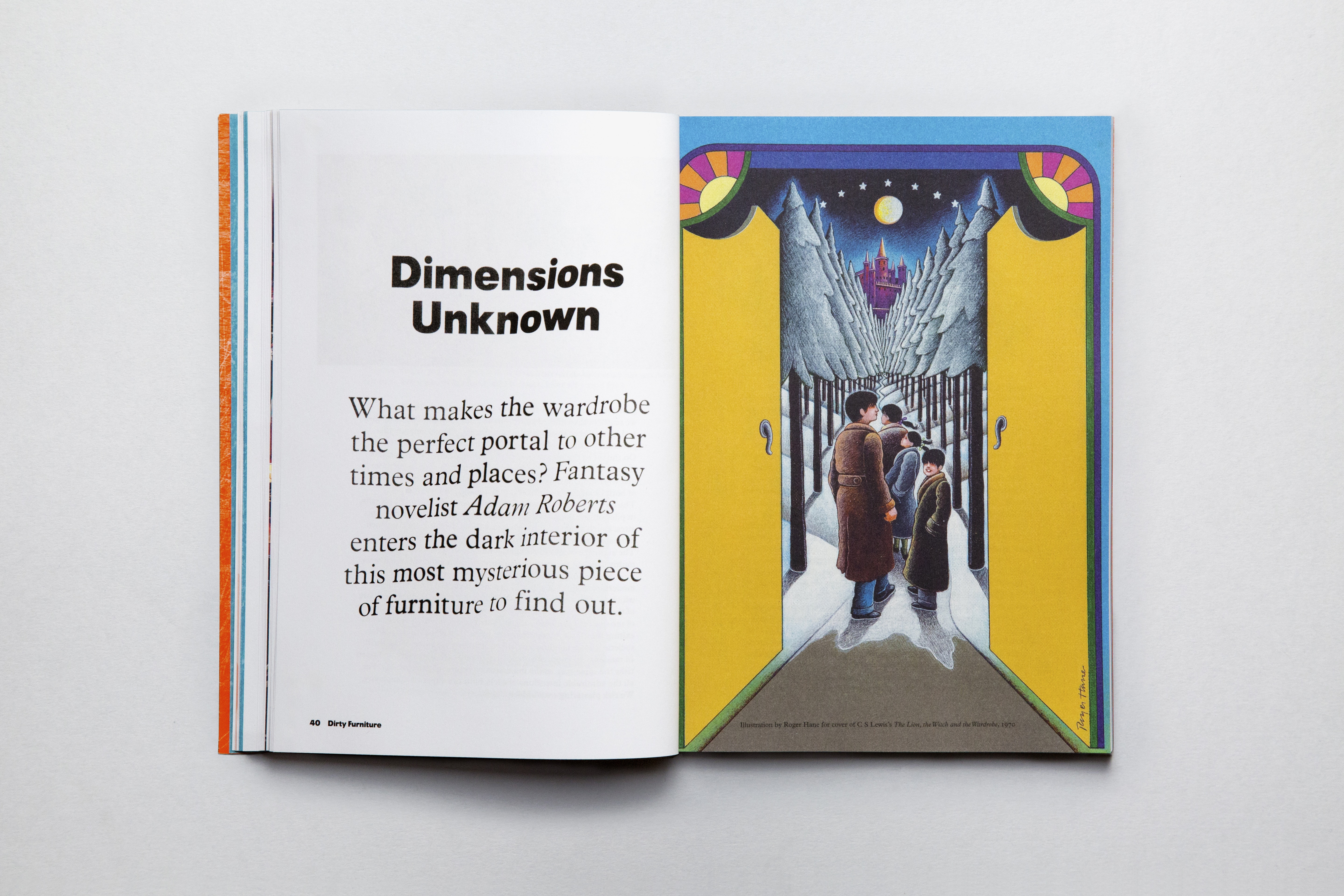 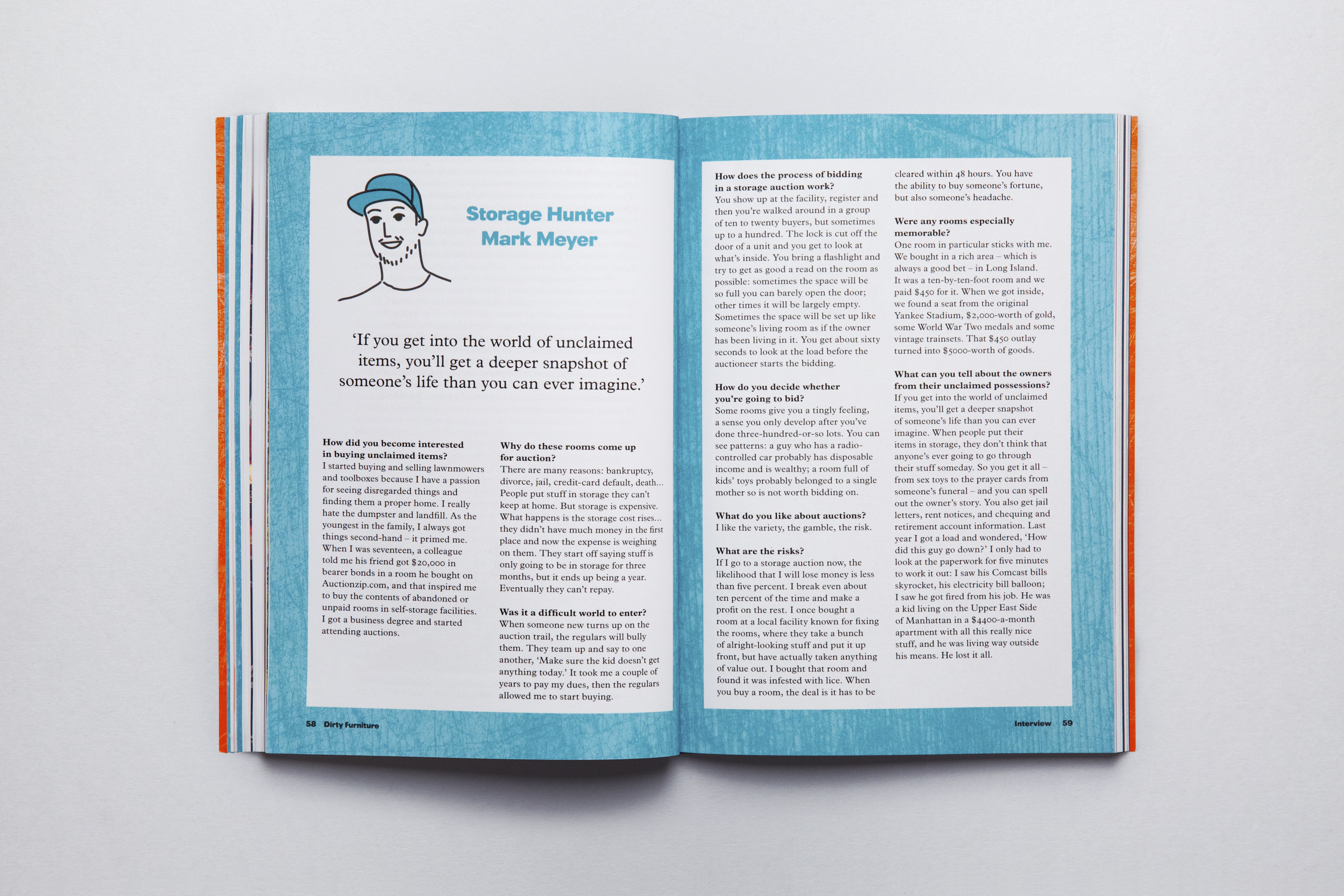 Putting together a magazine tends to bring up serendipitous connections and when assembling the closet issue of Dirty Furniture, Kim Kardashian-West kept coming up in different contexts. Then we realised that in her own trajectory from behind-the-scenes closet organizer to the most exposed human being in the world, Kardashian is somehow emblematic of the closet’s evolution itself, from being a secluded place to one of opulent display.

We chose the closet because it is at once mundane and mysterious: it stores our possessions and yet is capable of holding our most prized secrets and greatest fears. We like to invite writers from disciplines other than design to contribute. Beginning with C.S. Lewis’ wardrobe from the Narnia series as one of storytelling’s most iconic and imitated devices, we asked sci-fi writer Adam Roberts to consider just why this mundane object works so well as a portal to our fantasies. 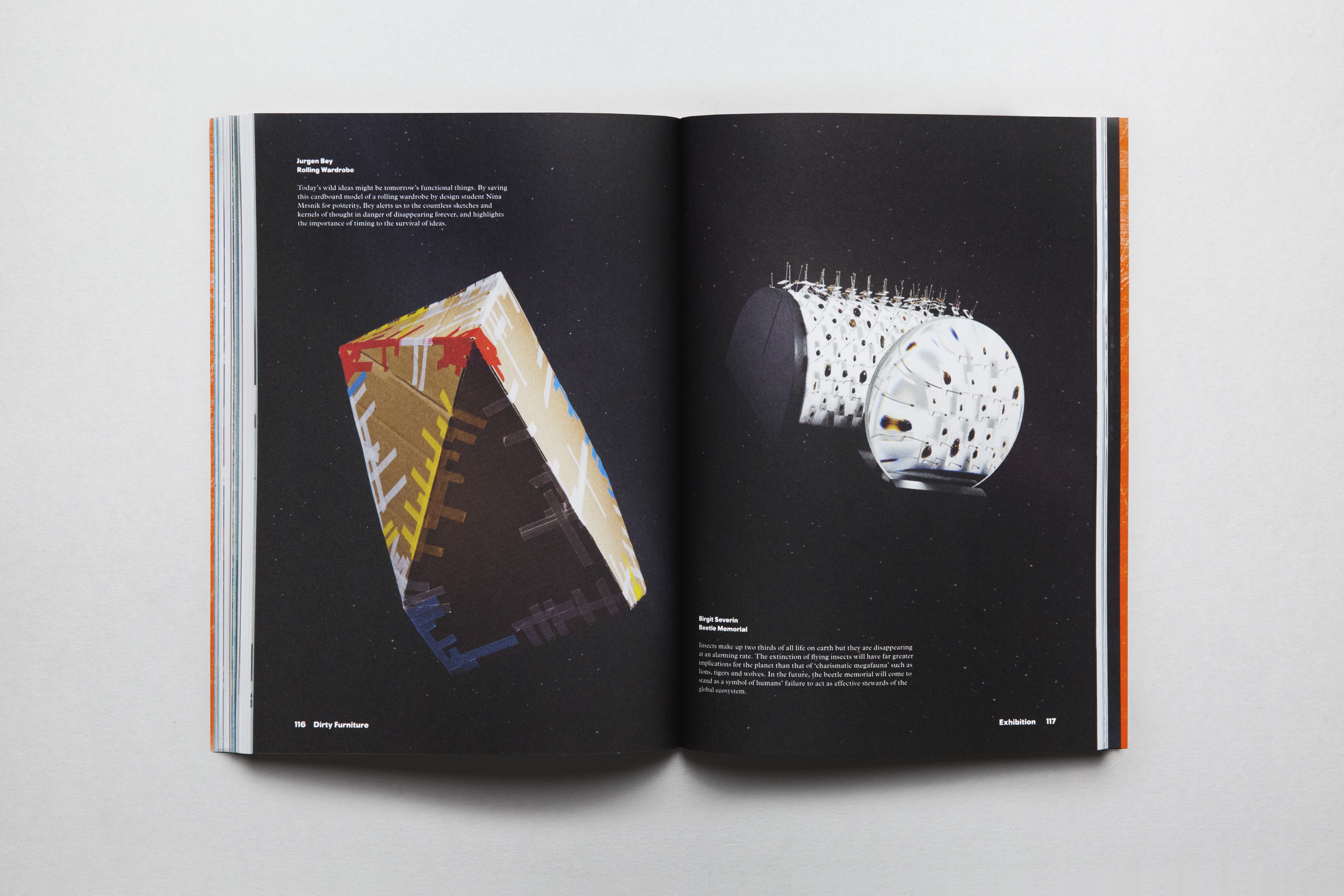 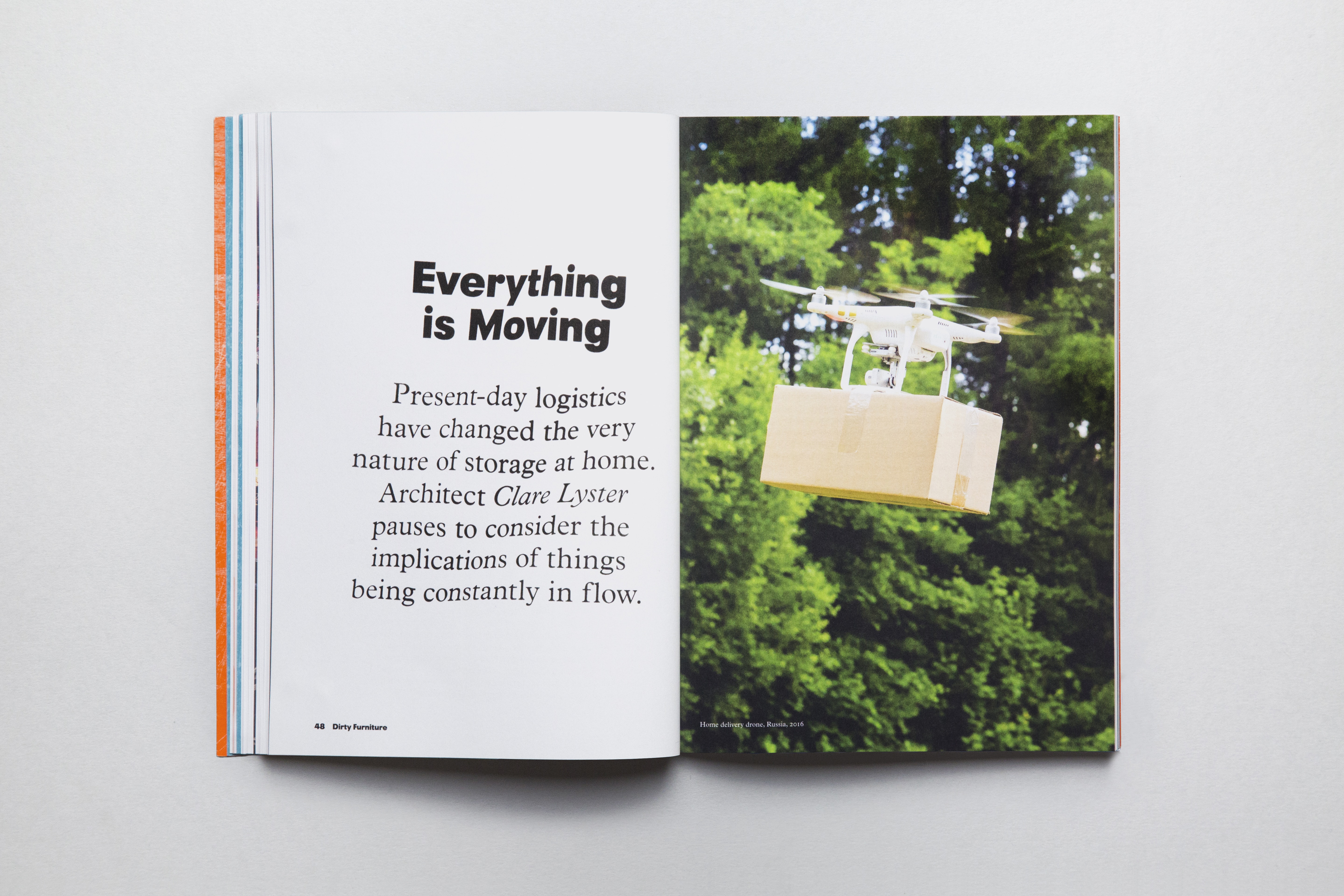 3. We interviewed a storage hunter

In every issue of Dirty Furniture, we interview three people who work daily with the piece of furniture in question. Mark Meyer makes a living by bidding at auction on the contents of abandoned or unpaid rooms in storage facilities. The practice is the basis of the American reality television series Baggage Battles and Storage Wars. We wanted to know the ins and outs of his profession. And hear what treasures he’d found.

The title of this essay is a mantra from the tidying manual Goodbye Things: On Minimalist Living by Fumio Sasaki. We were intrigued by the burgeoning domestic organisation advice industry, spearheaded, of course, by Japanese guru Marie Kondo (whose book The Life-Changing Magic of Tidying has sold over four million copies worldwide). When you look closely at some of the instructions in the current wave, they are bizarre. They are laced with invocations towards self-help, psychological well-being and spiritual enlightenment. We asked design writer Alice Twemlow to investigate.

We invited ten contemporary architects and designers including Sam Jacob, Formafantasma and Birgit Severin to choose what they would store for future generations, given that today, news reports are no longer presumed credible, photographs no longer seen as true and digital media permeates our lives. The result is an exhibition Matter of Fact, and a visual essay photographed by Philippe Fragnière and art-directed by Mathias Clottu. The project uses an essay in the magazine by critic Brian Dillon on the history of time capsules as a springboard.

6. The cardboard box is the new closet

American designer George Nelson’s 1945 design for the Storagewall utilised the unused space between the walls of a house for storage. His siting of the closet in relation to the rest of the house inspired us to think about what other contexts, systems or infrastructures could be considered in relation to the closet. This led to architect Clare Lyster’s essay on logistics which puts the closet in the wider context of the city. She concludes: “In a world where the imperative is for everything to be on the go, perhaps the cardboard box emerges as the fundamental symbol of this new era: a mobile closet.” 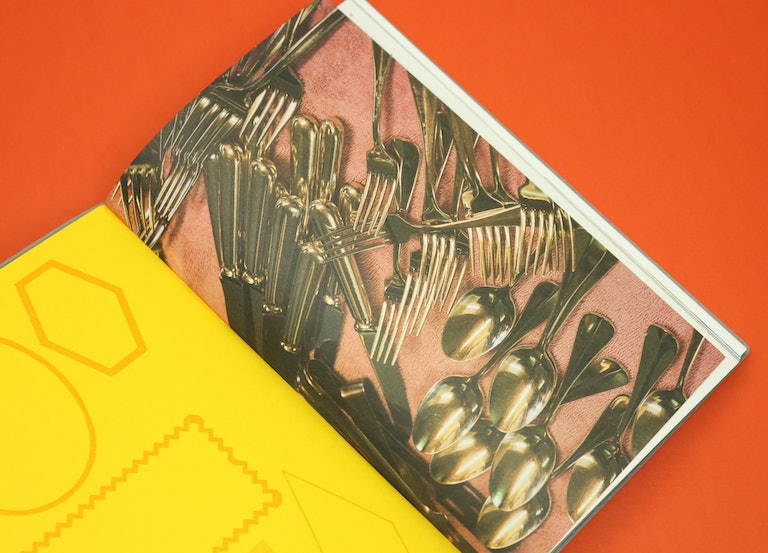