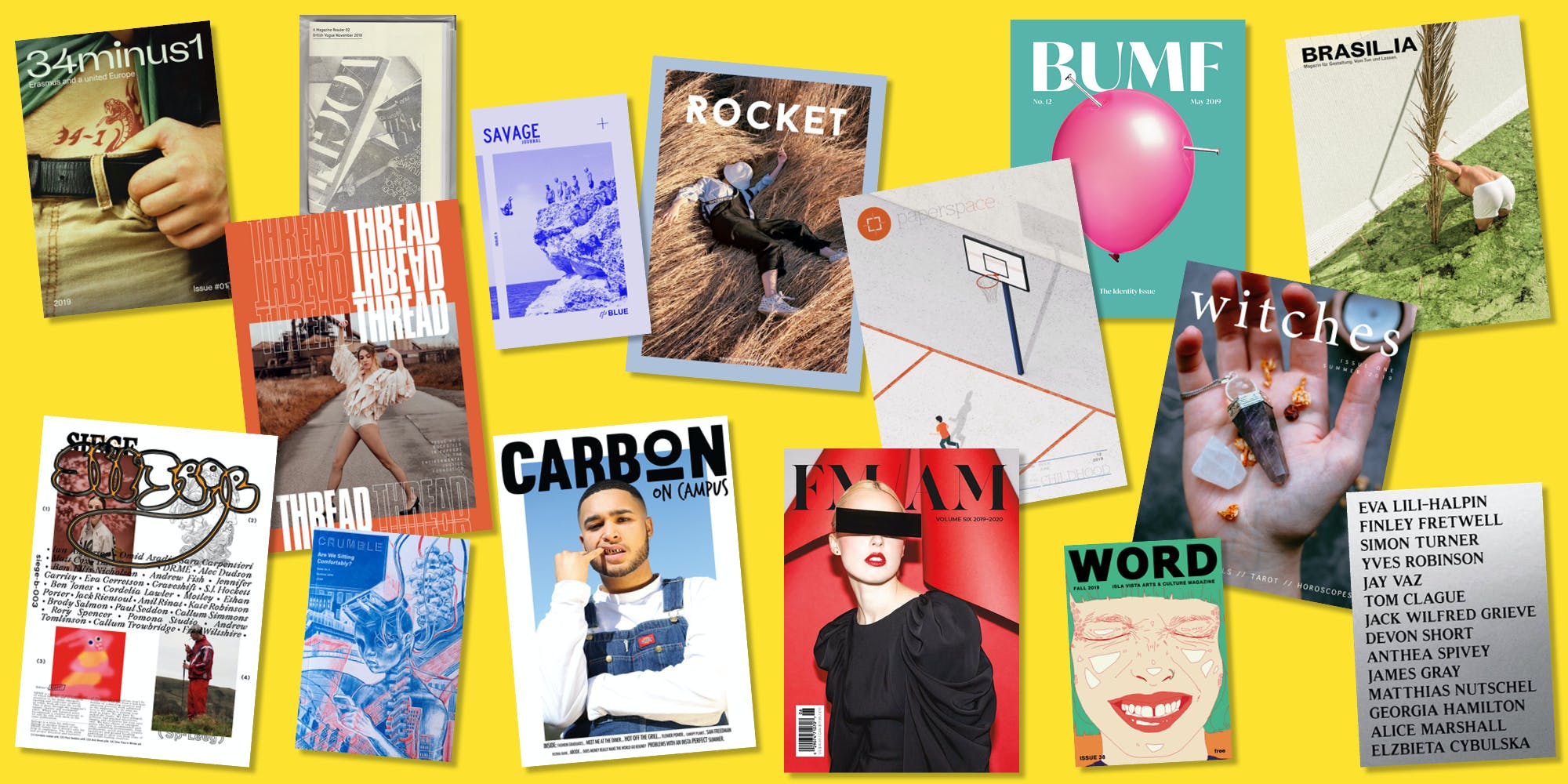 Most of the magazines entering this award are made by and for students, so we haven’t usually heard of them before, which makes it our most surprising category. Although it’s been great to see Brasilia and Crumble, our winners from 2018 and 2017 respectively, entering again this year.

Our judges for Student Magazine of the Year are art director and editorial designer Steven Gregor and writer and podcaster Liv Siddall. Find out more about them on our awards page, and scroll down to see the 15 magazines shortlisted for this category.

Showcasing projects made possible through the Erasmus scheme at Kingston School of Art, 34minus1 is an ode to a united Europe. Everything in the magazine — from an account of sewing Kim Kardashian’s dress, to a collage of footballers kissing — was inspired by a year spent living abroad.

Delightfully meta, A Magazine Reader dissects a famous fashion magazine and puts it back together in the form of a zine. This issue is themed around British Vogue and features a series of poetic reinterpretations of different adverts (“continue shopping! shop! Buy! You will never die!”).

A Magazine Reader 02 has been shortlisted for the Stack Student Magazine of the Year Award! . Published in a hand-numbered edition of 150 copies, A Magazine Reader is the result of a workshop in which a fashion magazine is dissected, critically analysed from various perspectives and put together again in an alternative form. The material from the magazine is used to create a new zine that gives insight into the cultural power and forms of value production that's at the core of fashion media. . The content for A Magazine Reader 02 was developed by MA Fashion Strategy students of ArtEZ Universty of the Arts gen. 28; Emma Disbergen, Laura Lisa Fernandes Januario, Eva Kühn, Boris Kollar, Karlijn Krijger, Nicole Dekkers, Andrea Chehade, Denise Bernts, Bobbine Berden and Mariane Cortez Meirelles, under the guidance of Femke de Vries, Ruby Hoette, Elisa van Joolen and Chet Bugter. . A Magazine Reader is a Warehouse production. Design by Corine van der Wal In collaboration with risowiso & WALTER books. @stackmagazines @walterinarnhem @fmkdvrs @hankavdvoet @corinevanderwal @artezfashionstrategy @chetjulius @lostandcollected @amsterdam.warehouse @andrechehade @allesingebruik @_b_o_r_i_s__k_o_l_l_a_r_ @emmadisbergen @lauralisafj @karlijnkrijger @nicole.dekkers @bobbineberden

Brasilia won Student Magazine of the year in 2018, so it’s wonderful to see them entering again. An exceptional title printed in both English and German by the University of Applied Sciences and Arts in Hanover, this issue is themed ‘Doing and Not Doing’. Treasures inside include a series of photographs of random people who have fallen asleep in public spaces.

Bumf is notable for the range of work on its pages. Put together at the Arts University Bournemouth, this issue features photographs of state carriages, a piece on loneliness, and a massive cardboard Barbie box with a real human woman inside.

This year has seen BUMF progress as a real contender in the world of student journalism. Accomplishments include being awarded for ‘Best Magazine Design’ by @spajournalism and being featured at @newblood_dandad. ⁣⁣ ⁣⁣ Thank you to @aubsu, all who submitted and to our team for all of their hard work. Read the full write up now live at bumf.media!

Carbon was created by first years at Solent University as a response to a feeling of disenchantment about what was available to Gen Z in print. Features include reflections on ageism in the fashion industry, and an exploration of whether grillz will become a mainstream fashion choice.

Crumble won Student Magazine of the Year at the Stack Awards back in 2017. An architecture magazine printed out of Edinburgh University, all the content is inspired by a weekly discussion group. Titled ‘Are We Sitting Comfortably?’, this issue includes imaginative reflections on door handles, reproductive rights and eating alone.

Today we sent out our #preorder copies of Crumble Issue #4 – if you’ve placed your order then expect your copy of the brand new mag to pop through your letterbox any day now! #newmagazine #preorder #architecture

Towards the beginning of FM/AM, there’s a love letter to cursive type script (the curly one from the noughties). Another quirk of this fashion magazine is the inclusion of a limerick by Edward St. John Gorey: “A timid young woman named Jane found parties a terrible pain. With movements uncertain, she’d hide in a curtain and make sounds like a rabbit in pain.”

Nest publishes work by students at Leeds Arts University. The material collected in this iridescent silver magazine is beautiful and diverse: there are juicy little cartoons; bold illustrations; and an unexpectedly tender series of photographs of wrestlers training in Senegal.

Paperspace is an architecture and civil engineering magazine divided into two sections: there’s ‘Inward’, where contributors share their experiences and research; and then there’s a section themed ‘Childhood’. One of the most interesting features in the latter is concerned with the architecture of child therapy treatment centres.

Rocket is a fashion magazine published by William and Mary University in Virginia. This issue features a write-up of a college runway show, an essay on the wildly popular Instagram account Diet Prada, and a shoot set in a pizza restaurant.

The ninth issue of University College London’s arts and culture magazine is themed ‘Blue’. Subjects suggested by that colour include the contraceptive pill, Hogarth and Elvis Presley. There’s also a series of testimonies from students about their experiences of mental ill health. 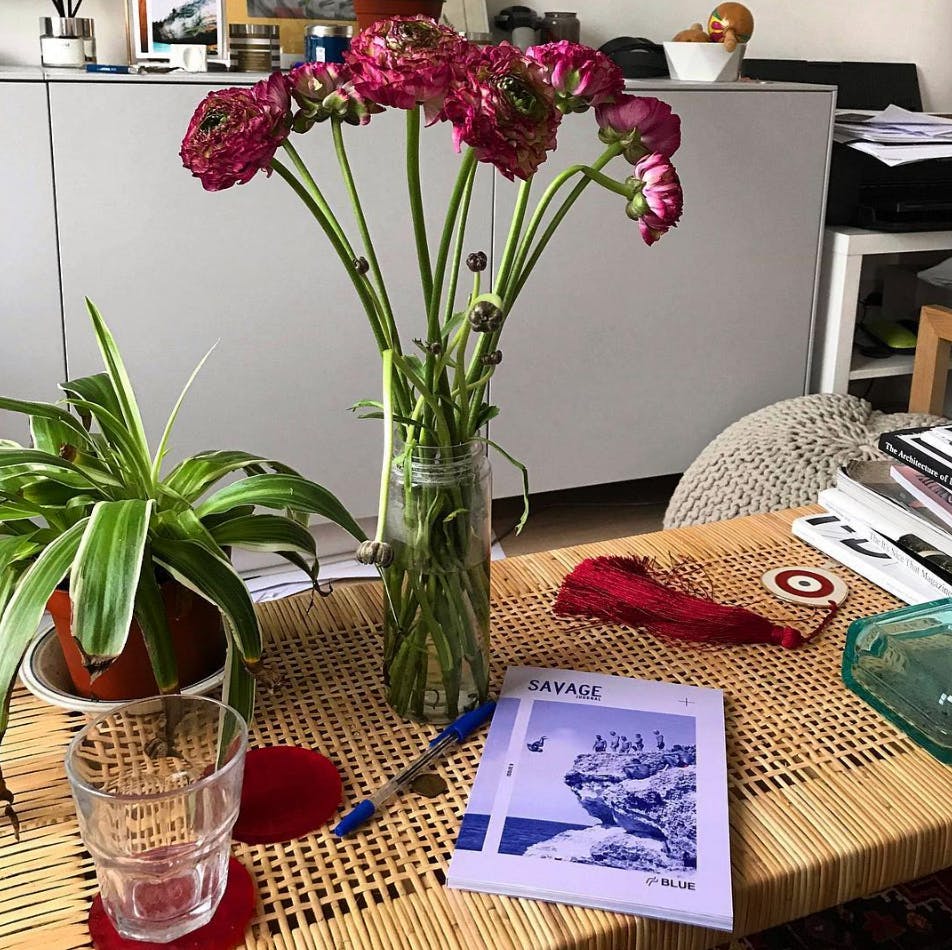 Published at Manchester School of Art, usually the governing principle is that every artist in the magazine gets to recommend another artist to be featured. But for this third issue, titled ‘Spliege’, editor C. George Brown pretended his computer got hacked, so he could free himself from his own rule and print exactly what he liked. One page features an illustration of “The Brexit Arms”, serving “Proper strong culture & other mixed things”.

Printed on recycled paper and produced by Durham University, Thread is a manifesto for “sustainable creativity”. In this issue, there’s an interview with eco-fashion campaigner Livia Firth and an environmentally-friendly lingerie shoot. 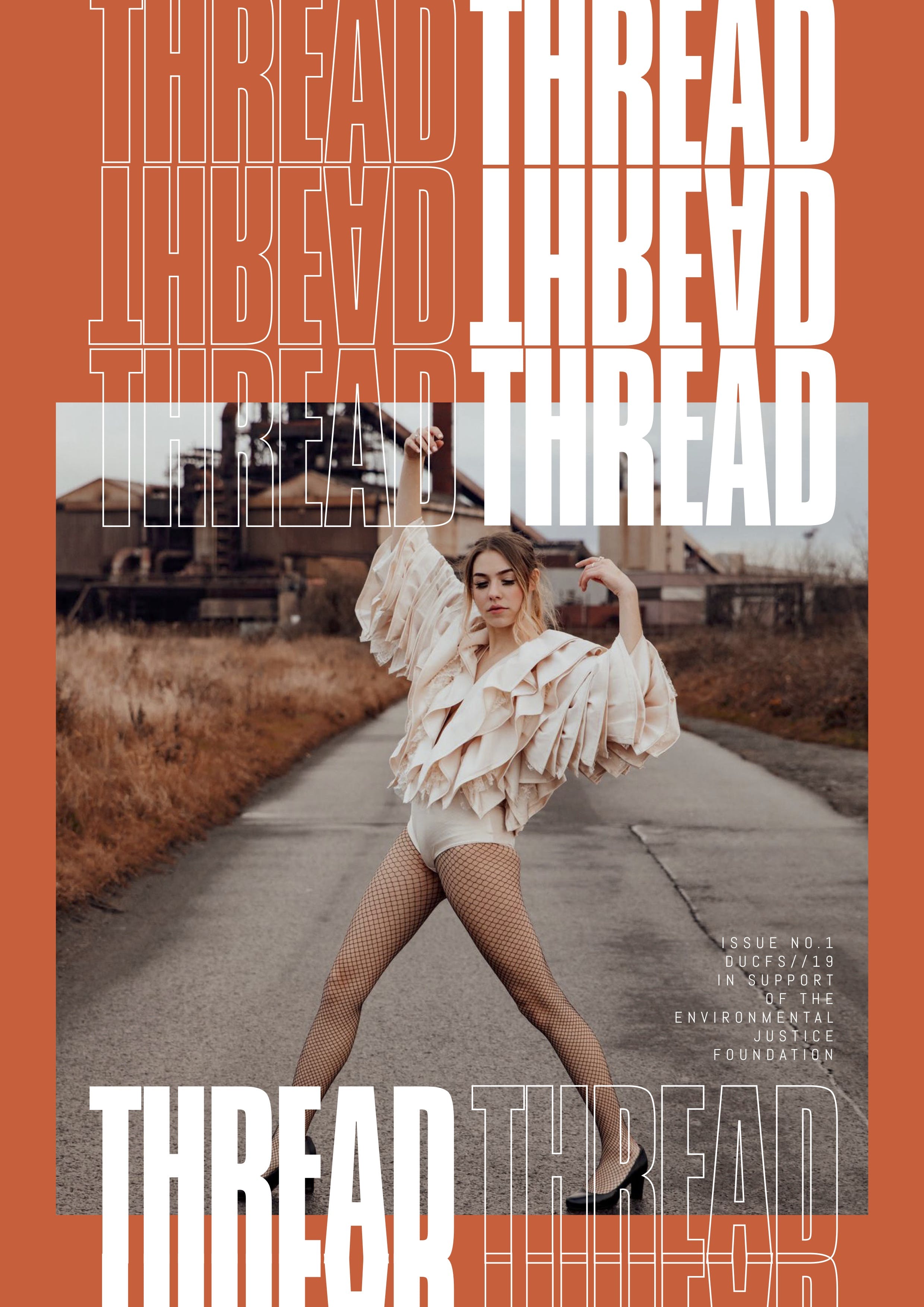 A magazine of modern witchcraft from Falmouth University in Cornwall, Witches has an autumnal theme and includes spells, horoscopes and “kitchen witch” recipes. There is also a guide to the properties of various crystals.